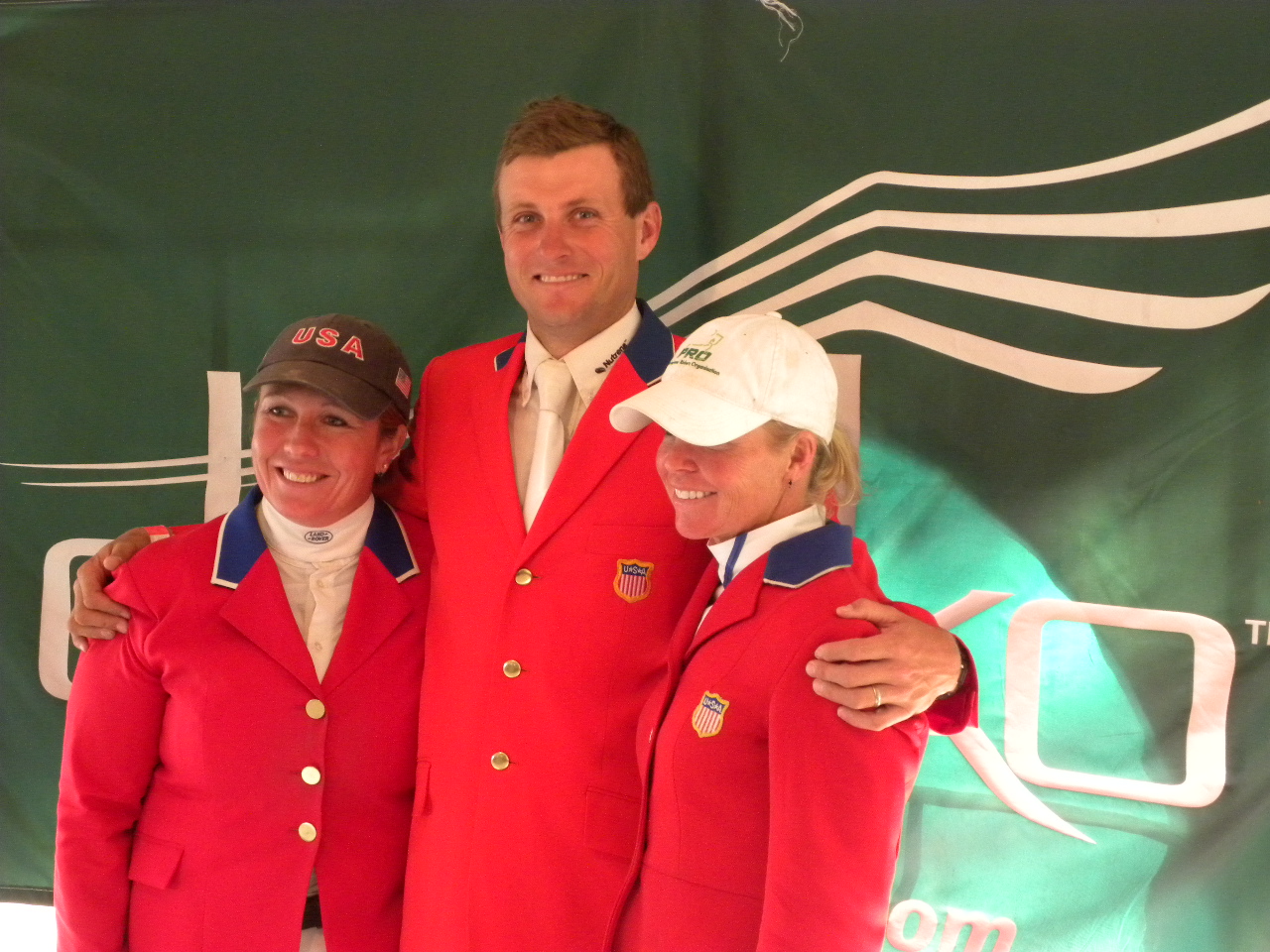 Boyd’s show jumping round with Faye Wolf’s Ying Yang Yo was one of those rides with a few good rubs where it could have been disastrous or perfect depending on how much the rails wanted to stay in the cups.  Thomas rattled four rails but they all stayed in place for a double-clear round.  That put all of the pressure on first placed Jan Byyny and Inmidair, who led Boyd by just a point.  Inmidair clattered through the second fence, making a mess of the jump and losing the chance of winning Fair Hill.   At that point a lot of riders might have gotten frustrated, given up, and had a bad ride for the rest of the round.  But Jan buckled down and rode the remaining jumps really well, just having one more rail the rest of the way.  Jan mentioned yesterday that re-learning how to speak was harder than anything she has ever done on horseback and I have to imagine that her incredible toughness helped her to put her show jumping round back on track today after that second fence.

Jan and Inmidair finished in 3rd place, which is perhaps disappointing considering where they started the day but it is a wonderful result overall and puts Jan right back in the upper echelon of US eventing.  Jan won the sportsmanship award for the CCI3* division and I can only imagine that it was a landslide unanimous vote.  In the press conference following the show jumping, Jan was asked what she planned to do next year.  She had just two words in response: the Olympics.

There were just 9 double-clear rides around Sally Ike’s show jumping course and just two of those came for the final 10 riders–Boyd and Phillip Dutton with Nina Gardner’s William Penn.  Becky Holder and Can’t Fire Me pulled one rail and moved up one spot to second.

The CCI3* division turned into a series of comeback stories this weekend.  Ying Yang Yo’s return from retirement and Jan’s return from the fall and ensuing stroke that nearly killed her have been extensively covered.  But, a very important result for the US and another comeback story is Twizzel’s 4th place finish with Will Coleman.  That pair has had back luck this year with an unlucky fall at Rolex and then having to withdraw from Burghley right before the dressage.  They secured a necessary qualifying result this weekend to get ready for Rolex and beyond next year.

Boyd won his second Fair Hill CCI3* championship in three years this afternoon.  The first came in 2009 with Neville Bardos and Boyd of course rode Neville for the USA 12 months later.  Could the same situation play out 12 months from now in London?  It’s impossible to tell, but there’s no doubt that Thomas has put himself into the mix of Boyd’s horses being considered for the team.  Thomas won Fair Hill by 4.2 points and it could easily have been 15 points with a few more fitness runs to make his cross-country a bit quicker.  That being said, two or four of those show jumping rails could easily have fallen down–that’s eventing.  Boyd now has four horses qualified for the London Olympics: Ying Yang Yo, Neville Bardos, Otis Barbotiere, and Remington.  Between four qualified horses and just winning a CCI3*, there’s no doubt that Boyd has the strongest position of any US rider right now looking ahead to London.

A few notes from the press conference:

–Boyd called his show jumping round a “typical Ying Yang Yo round where we bumped and rubbed our way around the course.”  The always classy Boyd gave Jan and Becky a lot of credit and mentioned that he didn’t know whether to be happy or sad when Jan pulled the rail down because he admired her comeback so much.

–Then Boyd told the story of buying and naming Thomas to the press conference.  Thomas was bound for slaughter and the man who bought him off of the slaughter truck has a system of running horses at a jump and the ones that jump he buys and the ones that don’t get put back on the slaughter trailer.  Boyd bought Thomas from that man for 1,200 Australian dollars and the rest is history.  Boyd deadpanned that he named Thomas “Ying Yang Yo” because he hoped the horse would compete at the Beijing Olympics and thought that the name might win favor with the Beijing judges.  Some of this stuff you just can’t make up.

–Boyd read the top seven horses at Fair Hill off of the list “Arthur, Running Order, William Penn, Twizzel, Inmidair, Can’t Fire Me, and Ying Yang Yo” and said “all of a sudden it looks like America has a bit of depth looking towards the London Olympics.”  He said he feels like we are a lot stronger overall going into London than we were going into the 2010 WEGs.  Boyd mentioned that the key now is to not beat the horses up too much with competitions in the spring so we can get all of our best horses to London.  Before Burghley, Blenheim, and Fair Hill I was quite concerned with the lack of depth for the US going into 2012, but US high performance has had a really good late summer and autumn overall.

–Boyd emphasized again today that he believes Fair Hill is the toughest three-star in the world and said that is it no coincidence that the top three horses are all ex-racehorses.

–Becky thanked her owners (husband Tom and Phil and Melissa Town), who stood with her throughout this year as Can’t Fire Me moved up the ranks.  “Teddy” had to walk a very tight qualifying route to get here but he did a great job for Becky this weekend.

–Jan jokingly called herself “desperately lucky” to not fall off.  She said she felt great before her round and nerves weren’t a factor.  She just felt Inmidair would leave from the gap distance she gave him but he didn’t.  As a quick factoid, Jan bought Inmidair from 4th placed Will Coleman.

We’ve had a great weekend here at Fair Hill.  I want to give a big thanks to all of the volunteers, organizers, riders, and fans who showed up this weekend.  And of course, thank you for reading Eventing Nation.  The USA can sleep easy tonight with all of the top 10 spots at the Fair Hill CCI3* filled with red, white, and blue riders.  May we have as much success next weekend in Guadalajara.  Go eventing.