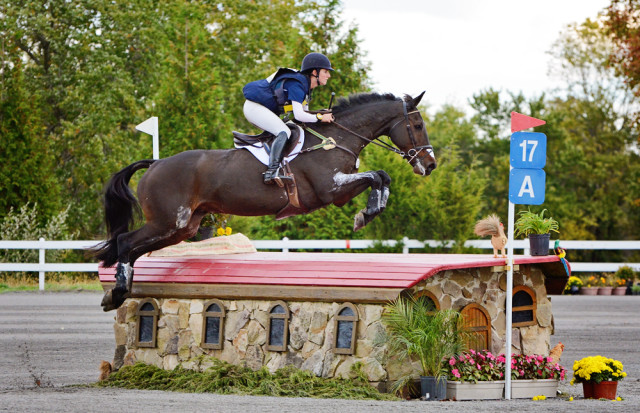 Jenny Caras and Fernhill Fortitude are looking to go clear and inside the time on cross country for the third consecutive year in the CCI3* at Fair Hill. Photo by Jenni Autry.

Entries are now live for the Dutta Corp Fair Hill International Three-Day Event, which is just three weeks away on Oct. 11-15, 2017, in Elkton, Maryland.

Emily Beshear and Silver Night Lady, who finished as the Reserve National CCI2* Champions in 2016, return this year in the CCI3*. Will Coleman and Boris O’Hara finished fourth in the CCI2* last year and will take on the CCI3* this year.

Just one of the horses that finished in the top 10 in the CCI3* last year is currently entered to return this year: Jenny Caras and Fernhill Fortitude, who placed sixth in 2016. Jenny and Fernhill Fortitude have made the optimum time on Derek di Grazia’s CCI3* cross country course for the past two years in a row, so they will look to make it three this year.

As for other big names we can expect to pop up on the list, Phillip Dutton confirmed to EN that Rio Olympic bronze medalist Mighty Nice, who finished as the 2015 Fair Hill CCI3* Reserve National Champion, will return in the CCI3* this fall to hopefully gain his qualifier for the 2018 World Equestrian Games.

You can check out the full CCI entry list here, as well as entries for the 2017 USEA Young Event Horse East Coast Championships. Shout out to super secretary Mary Coldren!

Which horses are you excited to watch at Fair Hill this year? Top of my list has to be Tim Bourke with Luckaun Quality, an absolute cross country powerhouse that has never finished outside of the top 15 in the Fair Hill CCI3*. Go Eventing.