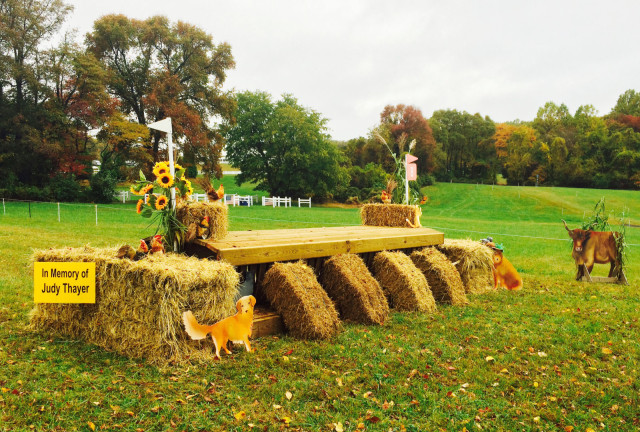 Like every year, the Dutta Corp Fair Hill International cross-country course featured beautifully decorated jumps for the record number of entries. But this year, the volunteers who work for weeks leading up to the event perfecting each jump were without one of their own, as Judy Thayer lost her battle to cancer on July 11 at age 58.

A founding member of Fair Hill’s board of directors, Judy dedicated herself to the event and venue for more than 25 years, organizing six horse trials and 15 cross country schoolings through the year, in addition to serving as cross country coordinator and lead decorator for the October championships.

Holly Covey, who has volunteered as a course decorator at Fair Hill for more than a decade, said this last month has been an emotional one for all who knew and loved Judy, as the volunteers who worked with her each fall to decorate the cross country course had to do so for the first time without her guidance.

“Judy had a certain way she liked to do things — Dr. Sue Livesay coined it ‘The Fair Hill Standard.’ It surprised me how hard it was to keep that standard up without her this year. Every ground line, every shovelful of mulch, every little flower — every detail was not too much for her to consider,” Holly said. “She would stand in front of a jump and think, then direct me to go get something in the barn or find some more mums, show me where to put them, and voila! There was the look she wanted.” 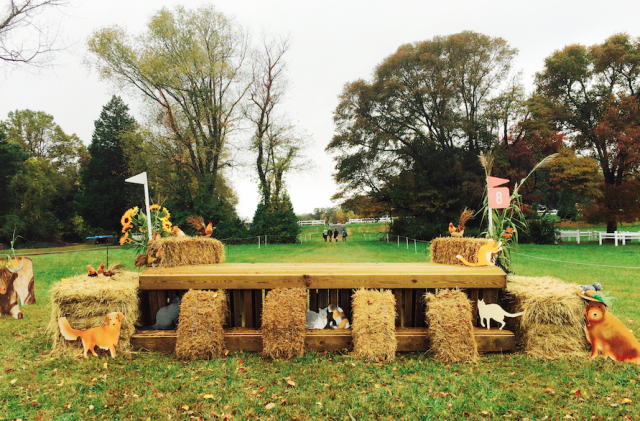 A strong believer in recycling, Judy would faithfully save items after the conclusion of each event and reuse them year after year, preferring to use as many natural materials to decorate the jumps as she possibly could, Holly said.

“She liked using real, natural plants and bushes and flowers whenever possible, I think because she felt a horse would ‘read’ natural decor better than plastic or painted things,” Holly said. “She was careful to make things fair and logical for the horse. And she also felt that we should decorate all the way around a jump, especially the back, because of photographing — most like to take pictures of the horse and rider’s faces.”

This year, John Ryan took over Judy’s position as cross country coordinator, and Fair Hill hired professional decorator Janine McClain to organize the decorating. Janine and the volunteers decorated several fences in honor of Judy, most notably, the Brookedale Hayrack at fence 8 on the CCI2* course.

A natural table decorated with straw bales, chickens, sunflowers, cats and dogs, Holly said the fence served as a reflection of the things Judy held dear in her life. “She loved her rescue cats and Golden Retrievers, as well as the chickens at her farm, and she also had Scotch Highland cattle,” she explained. 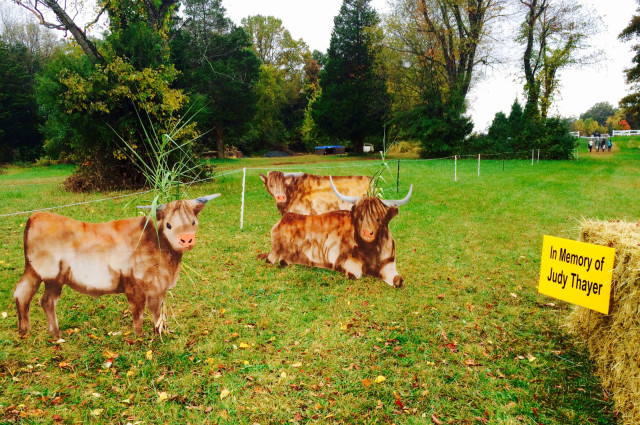 Fran Loftus, who draws the beautiful sketches of the fences each year for Fair Hill’s program, painted the cows several years ago, and the volunteers who decorated this jump thought it would be a touching tribute to Judy’s memory to use them at her fence. In looking at the jump, it’s clear how much attention to detail and thought goes into each and every fence on course.

“Judy hand picked us, and I think it was because we could understand her vision, and because we loved eventing. We were ‘lifers,’ and I think she knew that,” Holly said. “She never failed to send out a thank-you email directly after cross-country day to each and every one of us with her heartfelt thanks for all we had done.”
To Fair Hill’s cross country decorating volunteers — Holly Covey, Jon and Jean Brebner, Lea Purcell, John Ryan, Charlotte Eggink, Kim Hunter, Lisa Demars, Andrea Collins and Trish Gilbert — thank you for your hard work and carrying on Judy’s legacy through the beautiful fences on this year’s course. Her memory lives on in all of you.
Fair Hill posted a lovely tribute to Judy over on their blog. Click here to read.
0 0 votes
Article Rating
Subscribe
Login
Please login to comment
0 Comments
Inline Feedbacks
View all comments
More Insanity on Horse Nation >>