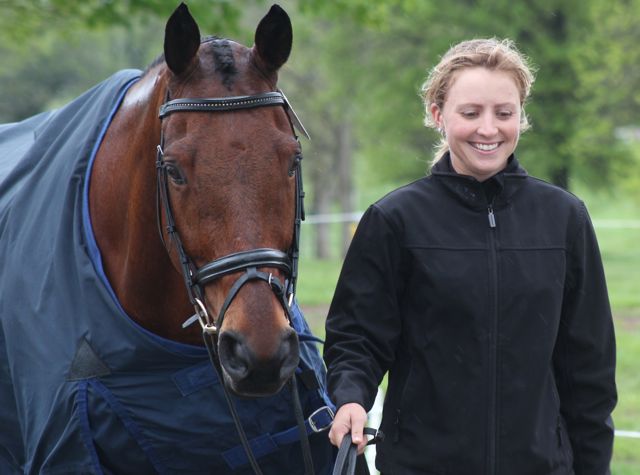 Photo by Samantha Clark from Rolex 2011

Our sport lost a great one on Friday when Jessica Phoenix’s long time partner, Exploring “Digby,” passed away in Florida. Jessica posted the following on her Facebook:

It’s with extreme sadness that I’m writing to let you know that Exploring, more affectionately known as Digby, suddenly passed away this morning. Words cannot convey the grief that I’m feeling right now. I have lost a true partner and beloved part of our family. Arriving at our farm in Florida, Digby was frisky and excited to be in warm weather where he could gallop and play in his paddock.  He was his spunky self, prancing around and full of attitude. When I went to him this morning, he was uncharacteristically lying down and I immediately knew something was wrong. I quickly called our vet and as we waited for her to arrive, Digby closed his eyes for the last time. The suspected cause is internal hemorrhaging and I take solace in knowing that he wasn’t in pain when he passed. We did everything we could, but unfortunately, there was nothing that could be done to save him.

I have peace in knowing that I was with him as he took his last breaths. He meant more to me than I can express and as you can imagine, we are devastated. Digby and I had an unbreakable bond. He is forever in my heart; my partner that brought me to the international level of competition and always gave his all. We trusted each other completely, travelling around the world together and accomplishing so much. Digby, we celebrate your incredible life and all your accomplishments as we say good-bye.

Every top rider has that horse who carries them to the top of the sport for the first time. Those horses inevitably save the day for their riders more times than we can count. And they inevitably don’t receive as much recognition as they deserve from the rest of us. But behind every great rider is the horse that got them there.  Exploring was that horse for Jessie.

“Digby” took Jessie around her first 3*, and to 15 advanced level FEI competitions after that. Perhaps most importantly, Digby carried Jessie around her first team competition for Canada, finishing 12th individually at the 2007 Pan Ams and part of the silver medal Canadian team. When I remember Digby, I’ll remember a model of the consummate professional and a horse that got the absolute most out of his ability. Digby made the 2008 Olympic team for Canada, but was unable to compete due to a tendon injury.  Not to be deterred, he came back and competed at the advanced level with Jessie for three more years.  You can read more about the awesome horse in this great article that Samantha wrote about Digby’s comeback. Exploring spent the final years of his career mentoring talented junior rider Alyssa Phillips up through the young rider ranks.