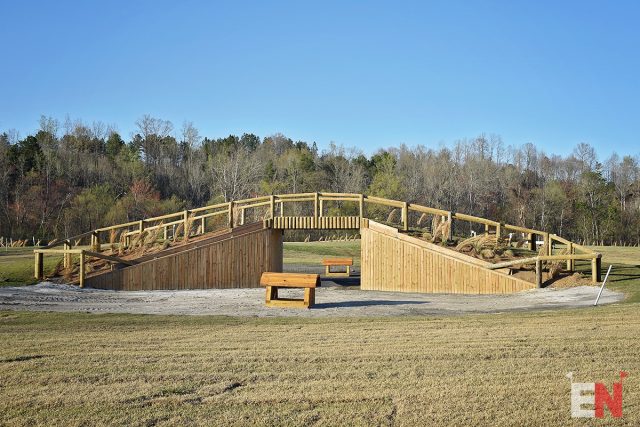 A new water complex that will be unveiled next month for WEG at Tryon. Photo by Leslie Threlkeld.

“Preparation work on the footing has progressed greatly following a very wet spring and, in consultation with Course Designer Captain Mark Phillips and the Tryon Organising Committee, it is confirmed that the full 5,700m track is ready for the WEG Eventing Cross Country according to the technical level specified in the Eventing Rules.”

The announcement comes following concern that the length of Capt. Mark Phillips’s track would be shortened due to heavy rain delaying ground preparations in the area. Some National Federations, including Australia and the Netherlands, delayed announcing their teams as a result of uncertainty surrounding the course length.

While the WEG course will be set at the full 5,700 meters, the FEI also noted that “as foreseen in the rules, modifications can be made to the course by the Ground Jury during the event should adverse weather conditions be expected.”

It is not uncommon to see the length of the cross country course at a major championships altered due to severe weather. One notable example occurred at the 2008 Olympics, where the equestrian events took place in Hong Kong in an average high temperature of 83.1°F (28.4°C) with 82% humidity. Mike Etherington-Smith’s course was shortened from 10 minutes to 8 minutes due to concerns for horse welfare.

As for the conditions we can expect during the WEG at Tryon, the National Weather Service’s Greenville-Spartanburg office records an average high temperature of 84°F (28.9°C) and average humidity of 74.5% during September. The NWS told EN that normal rainfall of about 4 inches is predicted for the remainder of August and into September. Eventing for the WEG is set to run Sept. 12-16.

Capt. Mark Phillips emphasized the need for a fit horse, as the 8th minute of the course is a 600-meter climb uphill, and said he thinks the optimum time will be very difficult to catch. Click here to listen to the full interview.

This article has been updated to include further details about the anticipated weather conditions during the WEG at Tryon.