All proposed eventing rule changes for 2019 have been approved by the FEI General Assembly, which concluded today in Manama, Bahrain. The rule changes will come into effect on Jan. 1, 2019.

While there are rule changes impacting numerous different sections of the FEI Eventing Rulebook, we have outlined the most notable revisions below. Click here to read the full document of proposed, and now approved, rule changes for 2019.

Blood, Whip Use and Yellow Cards

The new category system approved at the 2017 FEI General Assembly will come into effect on Jan. 1, 2019. CIC will no longer be used to designate the short format. Instead, CCI-L will denote long formate and CCI-S will denote short format.

The new 1.05-meter Introductory level introduced in 2018 will become the new CCI* level in 2019 and can be organized as short or long format in regard to order of the phases and horse inspections.

All other FEI levels will shift up in their star category according to the chart below: 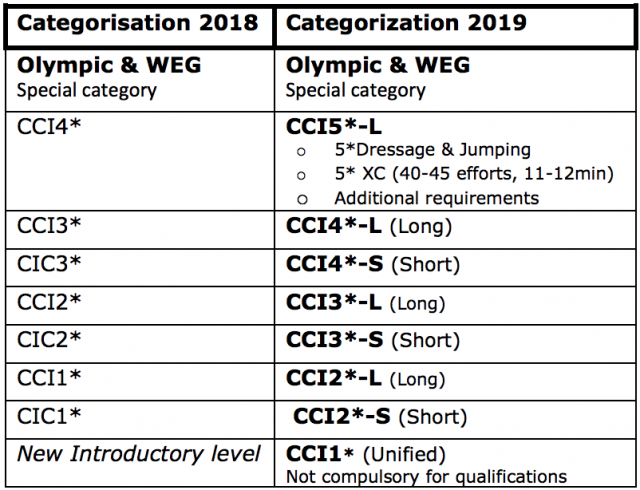 The CCI5* level system will be gradually introduced over the next two years. The current CCI4* competitions — Kentucky, Badminton, Luhmühlen, Burghley, Pau and Adelaide — will all receive the new CCI5*-L category designation in 2019 but must fulfill new requirements over a period of two years to retain the designation.

CCI5* Yearly Review: A yearly review will take place to evaluate each CCI5* event in regards to performance against the established criteria. A pre-assessment will take place at the end of 2019, with a formal evaluation at the end of 2020. The Risk Management Steering Group will also be involved in the yearly review to assess the fall rate on cross country and other safety measures.

Starting in 2020, all CCI5* competitions will be reviewed on an annual basis, with CCI5* status renewed or revoked accordingly for the following year.

The FEI has approved the following rule changes in relation to dressage for 2019:

The FEI has approved the following rule changes in relation to cross country for 2019:

The FEI has made extensive changes and clarifications to the bitting section of the rulebook “to take into account the wide use of snaffles in eventing,” as well as defining the action of bits. You can view the full list of tack and equipment rule changes in Chapter 7, items 43-45, of this document.

The revised Eventing Rules will be updated here in due course. View notes from the 2018 FEI General Assembly here.

This article has been updated to clarify the new show jumping time penalty equation.