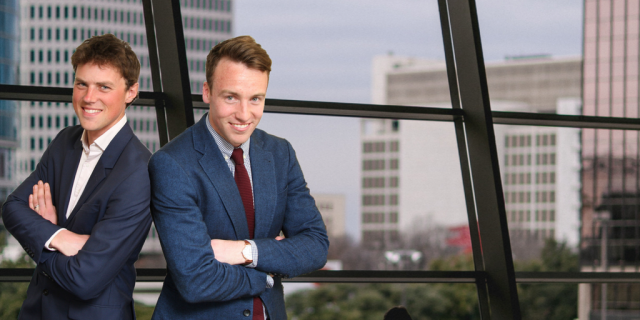 Sam Watson and Diarm Byrne of EquiRatings will work alongside the FEI to advance safety initiatives in eventing. Image courtesy of EquiRatings.

The FEI announced today that a four-year agreement with EquiRatings has been inked to collaborate on game-changing data analysis and risk management initiatives in both eventing and endurance.

Sam Watson and Diarm Byrne, co-founders of EquiRatings, will work within the FEI’s database and alongside national federations to collate data on fences, falls, injuries and other risk management factors.

Perhaps most importantly, the EquiRatings Quality Index (ERQI), which helps assess the risk of horse falls on cross country, will be implemented within the FEI database, starting initially at the CCI4* level. EquiRatings will also tackle specific safety projects at the request of the Eventing Committee and the Risk Management Steering Group.

FEI Secretary General Sabrina Ibáñez said the partnership with EquiRatings will help provide “a holistic approach to risk management” for national federations at every level of the sport.

“The ERQI is both a powerful tool for understanding and predicting risk in both eventing and endurance and brings a new layer of insight into the decision-making process at a global governance level,” Sabrina said.

“We have worked with EquiRatings in the past, but formalizing this partnership provides us with a platform to move forward with more concrete analysis of the FEI’s data, and gives valuable insight into performance and risk. It also has the potential in the future to contribute greatly to the promotion of our sport and the way in which it is consumed by fans.”

EquiRatings Managing Director Diarm Byrne said that managing risk in eventing is “a collective responsibility” for all who love the sport.

“This official partnership shows the ongoing commitment of the FEI and the Risk Management Steering Group to new measures and tools,” Diarm said. “We will be working with a number of other national federations around the world in 2017 to implement ERQIs at national level.”

As longtime supporters of EquiRatings and their work to advance safety initiatives within eventing, the EN team members are delighted to see this partnership formalized with the FEI. We have reported extensively on EquiRatings over the past two years, and you can learn more about their work in the EN Archives.

To learn more about ERQI, which is already in use by Eventing Ireland and will be tested this year by British Eventing, don’t miss EN’s comprehensive overview of the innovative traffic light system.

Sam and Diarm will also give a presentation on data analysis in the eventing risk management session at the 2017 FEI Sports Forum on April 11 in Lausanne, Switzerland, which will be streamed live on the FEI YouTube Channel.

EN will continue to bring you all the latest news on risk management initiatives within eventing. Click here to read more about the FEI’s work to date on advancing safety within the sport. Go Eventing.