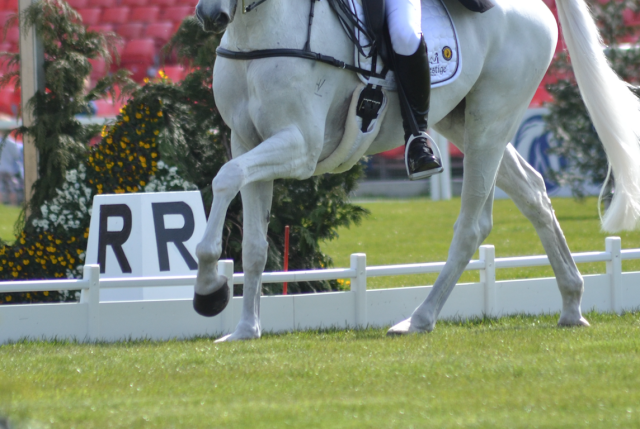 The new tests feature many of the same movements as before, strung into new sequences. In the trot, riders will still need to contend with shoulder-in on the centerline or quarter-line, eight-meter circles, and medium and extended trots. The half-pass in trot receives a bit more emphasis in the 2017 A test, now requiring horses to traverse across three-quarters of the arena width instead of only half. However, they are given an extra letter in arena length to accomplish this, so the angle of the half-pass does not change.

In the walk, the most significant change is the omission of the half-pirouette. Introduced to the horses first as turn on the haunches in the 2* tests, the half-pirouettes feature prominently at the 3* level now. However, neither of the new 4* tests require this movement.

The most surprising changes come in the canter tour. Previously, both tests featured the counter-canter heavily, utilizing 2-loop, 3-loop, and 5-loop serpentines dotted with flying changes to demonstrate self-carriage and obedience. Counter-canter is a movement heavily emphasized for eventers, beginning in the Prelim tests and remaining a key part of the tests as they rise through the levels. However, the 2017 4* tests have absolutely no counter-canter work.

Instead, the new tests rely on featuring the flying change in varying degrees of difficulty. In addition to the traditional short diagonals with flying changes over the centerline, the A test showcases flying changes off the medium and extended canter diagonals while the B test introduces a flying change straight on the quarterline following a half-pass across three-quarters of the arena. Straightness and obedience will be key to executing these new changes with high scores.

Rolex will be the first four-star to implement the new tests. Stay tuned later this week for a sneak preview of Marilyn Payne’s take on the new tests at the USEA Convention.