We have been anxiously awaiting the final draft of the FEI’s proposed 2018 rule changes for eventing, and after incessant refreshing the chinchillas were finally rewarded this morning. The proposed changes for 2018 will be voted on at the FEI General Assembly, Nov. 18-21, 2017 in Montevideo, Uruguay.

The last draft published on July 6, 2017 underwent a two-month review period during which all National Federations and stakeholders were given the opportunity to provide feedback, which the FEI Eventing Committee then reviewed before developing the final draft.

The final draft is definitely worth reading in full, and is especially interesting considering the feedback from National Federations and stakeholders is included within the document. If you find yourself short on time to peruse the entire 14,000 word document, read on for a summary of the key changes.

The FEI’s new proposed 1.05-meter level will be introduced in 2018, with the FEI suggesting the level be called Introductory for 2018 before it becomes the new 1* level in 2019. Starting in 2019, all of the current star levels will shift up and and be classified as Long or Short, as opposed to CCI or CIC. Under the current proposal, the current CCI4* events will be renamed CCI5* Major in 2019.

The new levels/categorizations are explained in this chart via the FEI: 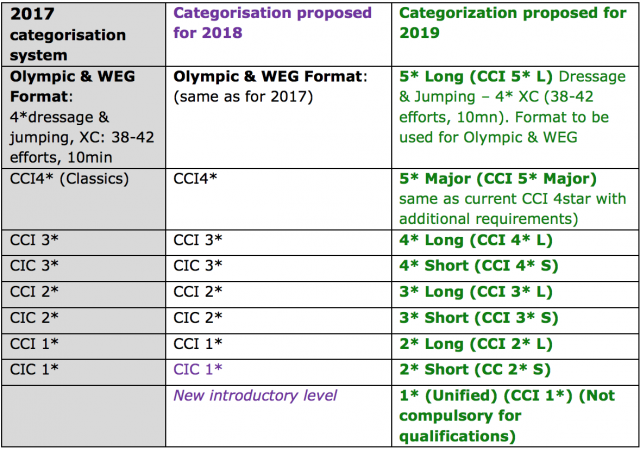 The requirements for the new 5* format (which will include the current CCI4* level, WEG and Olympics starting in 2019) are still being reviewed, but the FEI Eventing Committee is looking at increasing the required amount of prize money and adding minimum standards for broadcasting; spectator attendance; and athlete, media and spectator facilities.

The proposal also recommends that the number of jumping efforts on cross country at the Olympics and WEG be reduced from 45 to 38-42.

The FEI Eventing Committee is proposing removing the dressage coefficient starting in 2018, which means FEI dressage scores will no longer be determined by multiplying the score by 1.5.

“Based on much input from several stakeholders, the proposal to remove the dressage co-efficient is maintained … to rebalance the importance of the cross country in the overall result.”

The USA, Canadian, Belgian, British, Italian, New Zealand, Swedish and South African federations all supported removing the coefficient in their feedback to the FEI.

The German and Dutch federations opposed the removal: “Although the deletion makes it simpler, it will result in closer dressage results, which emphasizes the influence of the jumping phase. It makes even better dressage judging necessary with the judges using the full scale of marks. A good dressage education usually results in safer cross country riding.”

A change in the wording of Article 526.4, Blood on Horses, is also being proposed. The proposed updated wording reads:

Blood on Horses must be reviewed case by case by the Ground Jury. Not all cases of blood will lead to elimination. In minor cases of blood in the mouth, such as where a Horse appears to have bitten its tongue or lip, or minor bleeding, after investigation in consultation with the Veterinarian, the Ground Jury may authorise the Athlete to continue. The cases indicating Abuse of Horse will be dealt with according to the provision of Art. 526.2 (Abuse of Horse – Warnings and Penalties).

The Eventing Committee is currently exploring the idea of replacing the collective marks for dressage at the Olympics with one mark, as well as removing general comments “to speed up the publication of results after each test.” The discussion will continue in 2018.

A new dressage test will also be developed for the 2020 Olympic Games in Tokyo.

The FEI started sanctioning indoor/arena eventing as CIX competitions in 2017, and additional rules to govern this format are being proposed for 2018.

The committee proposes that these competitions be open only to A, B and C FEI categorized riders “to ensure all athletes have adequate experience,” with jumps set at a maximum (current) 2* star level and “speed related to the size of the arena.”

For the competition format, it is suggested that an optimum time be used if fixed obstacles are on the course. Running against the clock is proposed only with “knockable fences or hedges.”

Click here to read the full document of proposed rule changes for 2018. You can also read the full FEI Eventing Committee’s report on the 2017 season to date here.

What do you think of the FEI’s proposed rule changes to eventing for 2018? Weigh in with your thoughts in the comments.