Lions and tigers and bears,

No, wait, that sounds too much like a bad trail ride in Vermont; let me start over.

Denny and Eric and Bobby,

Tik ‘n Domm! (Sorry for the extra syllable, I just can’t squeeze it all in — metaphor for life.)

Yes, I did five lessons with five great instructors over the course of a little more than six weeks earlier this summer. I’m not usually this person, but a confluence of events led to them all happening in that short time frame. Sneak in our first schooling Beginner Novice horse trials and you have one packed month and a half of riding and thinking for me and my sassafras, smart-as-a-whip and athletic-as-can-be, pain-in-my-ass, it’s-a-good-thing-she’s-pretty homebred. I wore this t-shirt … 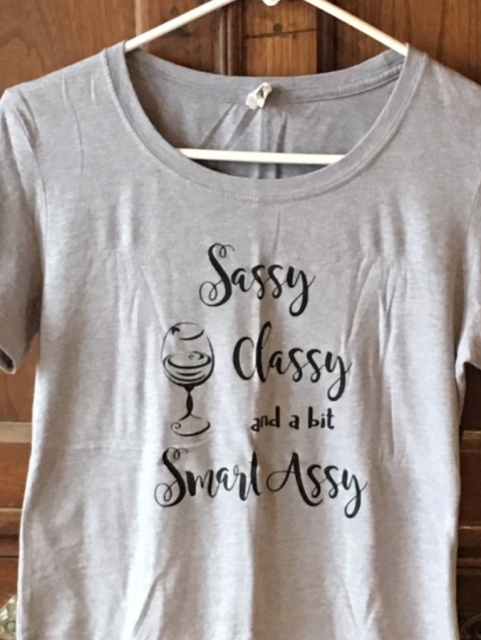 … to two of the lessons, and when asked whether it applies to me or the mare, the answer was, “Yes.” When I got home from the last clinic, I realized that I needed to do a little higher order synthesizing ideas and figure out what were my takeaways and how to integrate them together in our training program.

Somehow, turning 6, her first winter off, boarding for the first time, or something else made my formerly brave mare who came out of the womb with her jumper breeding giving her the instinct of what to do with her legs and body in the air, had become very tense and quick and was stopping at cross country jumps much more than just the occasional spookiness or confusion that had been happening before. Aside from a short, totally predictable, stint as a 4 year old when she decided that not going over jumps would be easier than going over jumps, she had usually been pretty brave. So what happened? And how would I fix it?

Since I live close enough, I thought a lesson with Denny Emerson using his great baby cross country jumps to see if he really thought we needed more slow puttering, just more exposure or something else would be helpful. I told him I wanted to go school his tiny cross country jumps but he had us start in the ring instead. And she acted like she’d never seen a cross-rail before. So we slowly puttered in the ring — different crossrails, little gates, little walls — all at a slow “flop down the trail” trot (if only he knew how it’s taken us almost three years to be able to go down the trail in some semblance of sanity, he’d realize that wasn’t a great metaphor for this mare but I got the point). He thought we needed to do that until the habit was fully installed to just go to the other side of every little thing with no drama. I asked why, even though I’ve started her slowly, she’s never had a bad experience, and I’ve never jammed at her when she does stop, did she get so anxious. Denny said it doesn’t matter, but I’m still bothered by the “why” and I haven’t come up with an answer.

Next up was the clinic with Eric Smiley that I organize at Hitching Post Farm twice a year. I’ve ridden with Eric more than a dozen times and I generally like his simple, straightforward style. However, he is very different from Denny in that his principle is, if it’s a fair question, the horse is expected to try to answer it. Jumping cross country at a place where we’ve done them all before and she has absolutely no physical difficulty with any of them seems fair, but with Denny’s advice to putter over small cross-rails until she’s totally settled, I wasn’t sure I even wanted to ride with Eric this time around. But I did. And she popped over the little stuff, and the bigger stuff and the way bigger stuff. And once again we fit the category that riders of athletic young horses know, “schooling Training, still getting eliminated at Elementary.”

She only stopped a few times, once each from different mistakes from me. She often feels like she isn’t listening to anything I say but on that day, as long as I kept my contact soft but didn’t drop her and kept my leg on but didn’t chase her, she went. In other words, she’s fine as long as I ride perfectly — no pressure there. I feel like I should have been thrilled that we jumped all the things, including several at Training level but really I now just felt confused. How can two totally different methods of schooling work? and how do I know when to do which?

Home for some thinking, not very consistent riding because of family visits, vacation, and a job interview, I concluded that basically Denny and Eric are both right but in different circumstances. Maybe on cross country we have to do more shut up and ride; in stadium we need more calm, easy relaxation. Or maybe we just need to make sure we can do both. So off to Green Mountain Horse Association to school and again, we had total panic when asked to trot to the pre-elementary log. However, we did calmly school a number of small jumps with at least a few that we jumped the first time. Quiet, calm, puttering — check. More confusion as to when we are brave enough for Training, when we need Elementary — check.

After that, I wanted to go back to HPF to school one more time before the schooling trials, but since they had Bobby Costello there to do lessons, I figured why not see what he has to say. I introduced us and our T-shirt (Bobby said he could get 10 of them handed out in a week) with a rather long explanation of our difficulties, inconsistencies, etc. Then she proceeded to be perfect in the ring and on cross country. No stops, totally rideable, jumped all the panels and fillers without looking, went out to the first three jumps on the cross country course with no hesitation. Went out to two other jumps on cross country with no hesitation. It was Wednesday; the schooling trial was Saturday. I thought we would be good to go.

But in the meanwhile, there was Tik Maynard. I was signed up for a two-day groundwork and riding clinic with him in April, but then she tested positive for strangles three weeks before the clinic. She just had a little fever and acted colicky for three days then had two negatives tests before the clinic but the barn manager was nervous and, fair enough, asked me not to come. So, when I saw that he would be at Mt. Holyoke college for one day, I jumped at the chance. There wasn’t enough time in the day to do both so I opted for riding. We started with walking over a folded liverpool. When she was a yearling, I did horse agility and the first time she saw a tarp, she dragged me to it, pawed and played with it, wrapped it around her legs and picked it up with her teeth. 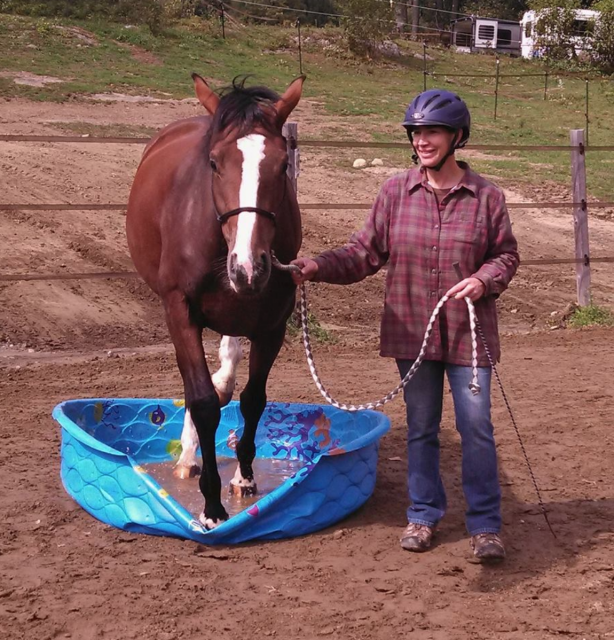 Kissa doing Horse Agility when she was 2. I love her “what is this and why are we doing it?” face. Photo by Heidi Potter.

You guessed it — today she had never seen anything like that, made a huge production out of it, couldn’t possibly go near it, needed the OTTB who had probably never seen one, to lead her over it multiple times each way. OMG, teenagers! But, as everyone says, ride the horse you’re on now not the one you had yesterday (or four seconds ago in her case). However, her panic allowed me to learn Tik’s method of working with a horse who’s spooking and I really like the clarity of what you’re asking for — reach toward the jump or past it with focus on it. So, even when she stops, I have a fair question to ask that she knows the answer to (touch the jump) and she can be right and I can praise her for trying, even if we didn’t get to the other side. She really likes to be praised — did I mention teenager?

Maybe because of this work with the liverpool or maybe because of her mood that day, she then became extremely bold, brave and actually very strong and difficult to hold back in the lines. We did a lot of halting. Tik thought this forwardness was bravery not anxiety. Great, now I have another type of wrong answer from her and yet another way to handle it. But OK, so now we’re bold and brave, that schooling trials should be no problem.

You already heard about the ride at that schooling trials in the last blog. I have no earthly idea what my horse does, why she does it and when she’s going to do what. I’m beginning to think I have no idea about anything when it comes to this horse.

So finally, we come to the weekend away. We went up to Kennebec Morgan Farm in ME where I camped for the weekend to do two days with Dom Schramm. I had signed up for this one long before deciding on most of the others and there was no real reason to back out, so we plowed ahead. Domm is just as nice as you think he is from his Evention series and social media presence and he’s a lot more precise and well-planned out than you might think a goofy Australian might be.

After my explanation of our inconsistencies and attachment issues, his first question was, “Have you tried Regumate?” (Spoiler alert: tried that later in the summer and it didn’t help.) It turns out that I had the really strong, brave bold horse, except for the first cross-rail each day. We did several great cavaletti, gymnastic type exercises and then jumped some courses. It was pretty much always hard to fit in 12-foot strides and she jumped all the walls, cross country jumps, panels and the liverpool.

Dom mollified me with a story about a two-star horse he had that stopped at the first cross-rail each time and he just planned on it, didn’t make a big deal, started small, never turned away (just back a few steps until you can trot up and hop over) and then the horse would remember his job and go on ahead with it. He was absolutely sure that the forwardness is being keen not being anxious. His suggestion of opening reins on the turns and low wide hands to funnel her toward spooky jumps were very helpful resulting in a lot less arguing and a lot more focus from her.

So where did we go from there? We practiced raised rail exercises with opening reins and precise rideability. We practiced approaching jumps and touching them and looking at them. We got worse. We stopped trying to act like an eventer and started riding like a hunter and she was happy in the ring. I assume each time we jump, we need to start with a plop around trot until she remembers the job and settles down to it. I try to ask fair questions and give her time to answer them. If she makes a mistake and stops, I reward her for trying to go to the obstacle with a forward attitude. I did a second clinic with Eric in which she was terrible the whole time. I did a second clinic with Tik in which she was so perfect he couldn’t even help me with any problems since she didn’t show them.

And now I’m going to head to Florida for three months to get her into a program with Tik and see how he can help us. 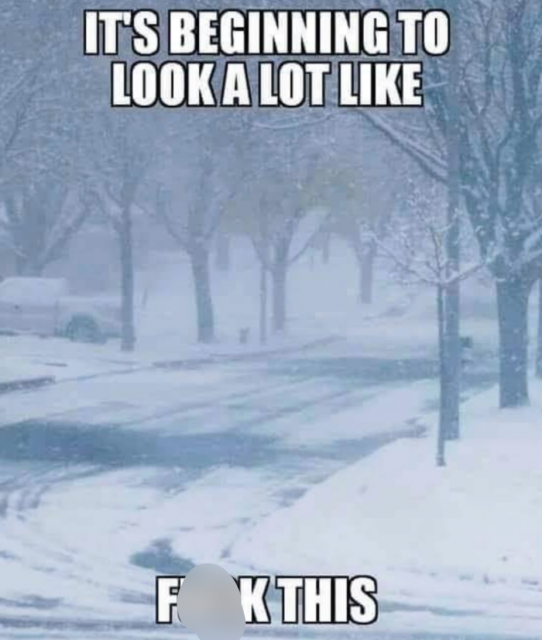 If you didn’t see this go around Facebook, it’s exactly how I’m feeling.