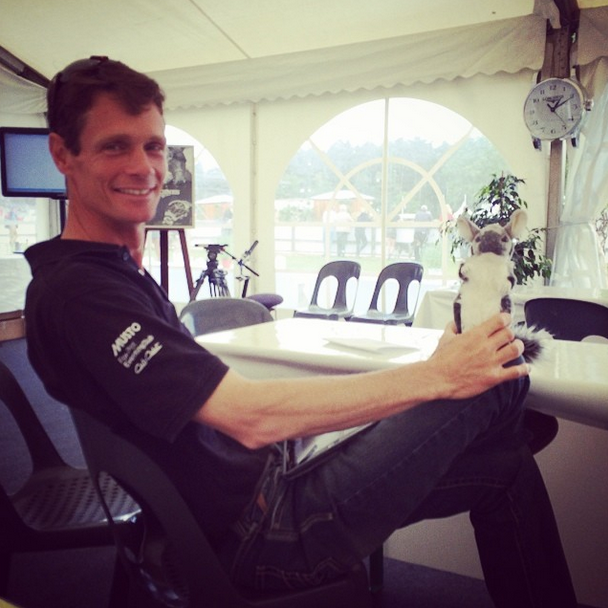 That’s a wrap on the first day of dressage here at Luhmühlen. There’s a lot that goes unsaid when I’m manically typing reports and snapping photos all day — not to mention shooting the shakiest video since John ran around the Rolex cross-country course with a camera in hand. So in the spirit of Leslie’s interesting tidbit posts from Bromont last weekend, here are five thoughts on what’s gone down so far here in Germany.

1. If you’re not following Chinch’s adventures on Instagram, what are you even doing with your life? The little guy is up to no good, as usual, and he threw himself on William Fox-Pitt in the press tent today like the shameless fan girl he is. He also spent a little time consoling Joanie Morris, whose luggage is currently “somewhere in Europe,” according to an Airline That Must Not Be Named. She wore Bobby Costello’s socks today, and we’re all pretty excited to see what outfit she cobbles together tomorrow.

2. WEG selection is on everyone’s mind, and it’s come right down to the wire to determine who will represent Team USA in Normandy. When I spoke to Coach David O’Connor about how it’s been a less-than-ideal spring with both top horses and riders alike facing soundness issues, he wisely noted that this is no different from past championship years. Inevitably, a top horse is almost always forced to sit out at the Olympics or WEG because of soundness. That’s just the nature of the beast.

3. Just six riders wore helmets on the first day of dressage; that’s 22 percent of the competitors. Compare that to 57 percent of riders who ditched their top hats at Rolex this year. I already addressed the “great helmet debate” earlier today, but it’s worth emphasizing again that helmet awareness still has a long way to go in Europe, and the movement has far more traction in North America. To see photos of which riders wore helmets today, click over to this post.

4. Silva Martin is a rock star. When you talk to her, it’s hard to believe she was bedridden and battling speech difficulties less than three months ago. She’s totally back to her old self now. The fact that she’s here in Germany says a lot about the progress she’s made in the healing process, as many people who face brain injuries are restricted from flying such long distances so soon after their accidents. She’s fiercely determined to get back in the saddle as soon as possible, and I have total faith she will.

5. Boyd Martin didn’t have the day he hoped for with Otis Barbotiere, who stuck his prissy French nose in the air and told Boyd exactly where to shove the dressage test. They scored 58.5 for 13th place with half the field still to go. It’s a disappointing outcome for sure, but Capt. Mark Phillips’ cross-country course favors bold horses, and Otis thrives over tracks like these. I’m taking Otis’ antics in the little white box as a good sign that he’s ready to tackle his first CCI4* course in nearly two years.

Boyd goes on his second ride, Shamwari 4, at 3:18 p.m. tomorrow, followed by Phillip Dutton with Mighty Nice at 4:24 p.m. The heavy hitters will be out in full force on day two, and the last group of the day is packed with horses that can pull out all the stops. Expect Michael Jung and fischerRocana FST to be near the top of the leaderboard in the 9-year-old mare’s four-star debut. William Fox-Pitt will also look to extend his lead in the FEI HSBC Classics Series with Cool Mountain.