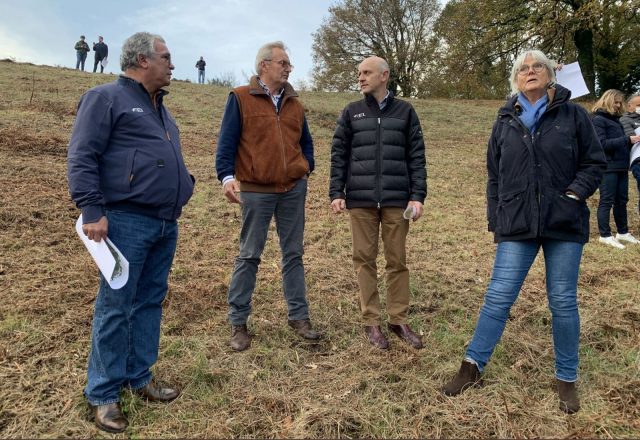 With the global eventing season now underway, all eyes are locked onto this summer’s FEI Eventing World Championships, which will take place in Pratoni del Vivaro, just outside Rome, from September 14-18. While we’ll get a sneak peak of all that’s to come in mid-May, when EN will be on the ground at Pratoni’s test event and Nations Cup opener, we’re still itching for more from Italy – and the FEI has delivered, with a coffee break chat with course designer and Show Director Guiseppe della Chiesa.

Previously a top-level rider himself, Guiseppe was also responsible for the first computerised system for tracking eventing results – just one of his many contributions to our sport over the years. We’ve also seen him act as Show Director for Eventing and Driving at the 1998 FEI World Equestrian Games™ in Rome, and he’s served as an FEI technical delegate and course designer since 2002, with four editions of the Badminton Horse Trials (2014-2016) and the FEI European Championships held at the Pratoni del Vivaro in 2007 under his belt. He’s also a member of the FEI Board and was Chairman of the FEI Eventing Committee from 2010-2017, and had a successful career as an amateur jockey on the flat and over fences, as an event rider, and in show jumping.

Twenty-four years after the FEI World Equestrian Games™ in Rome, Pratoni del Vivaro once again hosts a top-level global event. What has changed in the sporting aspects of the disciplines that will be staged at next September’s World Championships?

The endurance element has become progressively less relevant, putting more emphasis on technique. The standard ratio of the influence of the eventing phases was calculated at dressage 3 : cross-country 12 : show jumping 1. Now, a horse-and-rider combination must be equally competitive in all three tests. The same applies to driving.

Such changes have obviously also affected the type of horses chosen, the manner in which horses and riders train, the building of cross-country fences and the way courses are designed. Nowadays, nearly 90% of cross-country jumps are portable, as are 50% of obstacles in the marathon. The timber we will use comes from Poland. Logs of this size, hard to find in Italy, have arrived and are still arriving. The fact that the fences are portable, and therefore can be stored in a warehouse, allows us to use an effective alternative instead of only using chestnut, which lasts forever since it is extremely resistant but is also very expensive.

Compared to 24 years ago, I have to acknowledge that great progress has been made as far as attention paid to equine welfare and rider safety is concerned, factors that have become essential when organising events.

Who are the members of the team working with you?

GDC: As far as Eventing is concerned I am supported by Giulia Rocchetti as my assistant and by Carola Brighenti who is the Sports Manager. Carola, a former eventer, has worked in the UK for years and her experience includes being the Equestrian Coordinator at the Tokyo 2020 Olympic Games. My assistant course designer will be France’s Alain Ponsot who already worked at Pratoni last November. Then there is also all the staff working during the competition.

For the Driving Championships we have the team that works in Aachen with Birgit Rosenberg (Sport Director) and Fritz Otto Erly, who is an FEI Technical Delegate for both Driving and Eventing. The Show Office will be run by Cindy Timmer.  Driving course designer will be Germany’s Josef Middendorf who will be able to rely on assistance provided by our own very professional Gabriele Panier Suffat.

What is your attention focused on during the first months of work?

GDC: The reorganisation of the facility required a great deal of resources, both in terms of time and investments.

At the time of the FEI World Equestrian Games™ in 1998 we had only six months to set up. With its established facilities in Rome, Italy had been assigned the organisation of the Games after Dublin’s withdrawal and the Organising Committee led by the Monti Riffeser Publishing Group, together with the Italian Equestrian Sports Federation, performed a small miracle organising an event that received unanimous acclaim. The Pratoni equestrian centre was fully active at the time and often hosted competitions of the highest international importance and our team was amazingly efficient, relying on the decade-long experience of two key men such as the respected course designer Albino Garbari and Vittorio Gavini.

Rome’s candidature for the FEI World Championships 2022 began a lot earlier [in 2019], after a decade of ordeals caused by bureaucratic issues with the area being sold, problems that caused the facility to be closed and, sadly, to its deterioration. Its management was subsequently entrusted by the Municipality of Rocca di Papa to the Italian Equestrian Sports Federation.

In view of these World Championships, the entire area has undergone land reclamation work while all the arenas, warm-up areas, with the exception of the legendary grass arena that hosts the show jumping (120×80 metres) have been rebuilt from scratch. We are talking about a silica sand arena (90×60) for the dressage phase of the eventing championships with its own warm-up arena (65×45) and two silica sand warm-up/training arenas (80×60 and 45×70). The stable area, which also includes a veterinary clinic, will have 320 stables and all the infrastructure for the athletes’ area (secretary’s office, toilet and washing facilities, grooms’ accommodation, offices, restaurant, accreditation office etc.).

This centre has an immense amount of experience and traditions in hosting great events. The Test Events in May will be an effective trial. We are all motivated and delighted to once again see Pratoni del Vivaro at the centre of the world’s attention.

Tickets are available now for the FEI World Championships for Eventing and Driving.