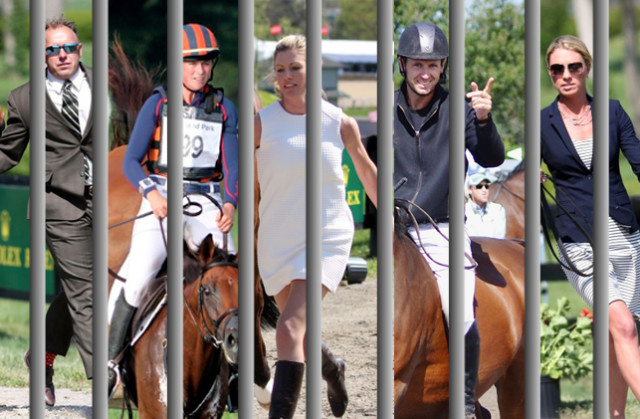 It looks like some of the perpetrators are already running from the Jersey Fresh police.

Five riders will be placed under “stall a-rest” at Jersey Fresh, with the bail money they raise going toward supporting both the event and the Horse Park of New Jersey’s capital campaign to refurbish the footing in the facility’s arenas. The riders who will be behind bars are:

“Bad to the Bone” Buck Davidson

The riders must each raise $1,000 by Saturday night to be bailed out of jail, a 10-by-10 chain link pen where they will be locked up during the JFI Fiesta competitor party following cross country.

A bail bondsman will be collecting donations on Saturday and again at the party that night, when the riders will make an appeal to the crowd to help them reach their quota if they fall short. Once riders hit that $1,000 mark, they will be released from jail.

A special prize will be awarded to the rider who raises the most money to take the title of “Big Dog of the Pen.”

Here’s how you can play along: Go make a donation now at this link to help your favorite rider raise $1,000 so they can be sprung from jail on Saturday night. If you’re planning to attend the event, you can also make a donation in person on Saturday at a kiosk (we’ll let you know the exact location on cross country day).

Proceeds from placing the riders under “stall a-rest” will benefit both the Jersey Fresh International Three-Day Event and the Horse Park of New Jersey’s Capital Campaign for Footing Refurbishment.

Click here to support your favorite rider with a donation. Who do you think will raise the most cash and take home the title of Big Dog of the Pen? Vote in the poll below, and stay tuned for much more from Jersey Fresh; EN’s live coverage begins tomorrow!

Update: We’ve been told Wayward Tik Maynard has taken a strong lead, followed by Bad to the Bone Buck Davidson. All three ladies are trailing, so go help bail them out!

[Bail Your Favorite Rider out of Jersey Fresh Jail]