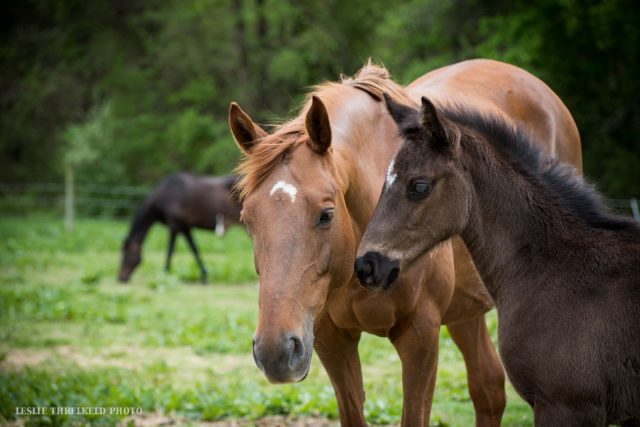 Fey and Bonny in April 2018. Photo by Leslie Threlkeld.

Back in 2015, I started blogging about breeding my maiden mare, Cor de Fe (Cor Magnifique – Leap of Faith, Malthus) with the help of Mary Quarles at Ketchen Place Farm (KPF). We had teased and covered Fey without incident, and she got pregnant easily. In fact, she got pregnant twice but both times slipped the pregnancy within 60 days. We were perplexed but not discouraged. After the second time, we decided to hold off on a third attempt and try again the next year. The blog I hoped would bring readers along a journey to a live foal stopped there.

It wasn’t until 2017 that we bred Fey again, this time to a different stallion on the farm ­– a big, kind Thoroughbred named Corollary (Expensive Decision – Kristin S., Kris S.). I did not blog about it this go around — call it superstition. Fey took immediately and this time held on to the pregnancy without issue. She carried the foal to term and gave birth to a beautiful filly on March 6, 2018. The dam is chestnut and the stallion was bay, so we were surprised when the filly was born a mousy gray color. We named her Bon Cor, which means “good heart” and call her Bonny for short. She’s a bonny lass indeed.

You never really know how a mare is going to be as a mother until she’s faced with a foal at her side. I was delighted and relieved when Fey grasped the responsibility immediately. With Bonny, Fey was attentive, protective (but not excessively), and very proud. She looked after the filly and taught her to love people, but she didn’t take any crap. By the time Bonny was ready to be weaned, Fey said “sayonara” with little drama. Today Bonny is an awkward, hairy two-year-old, but you can see the athletic outline of a well-bred sport horse underneath. 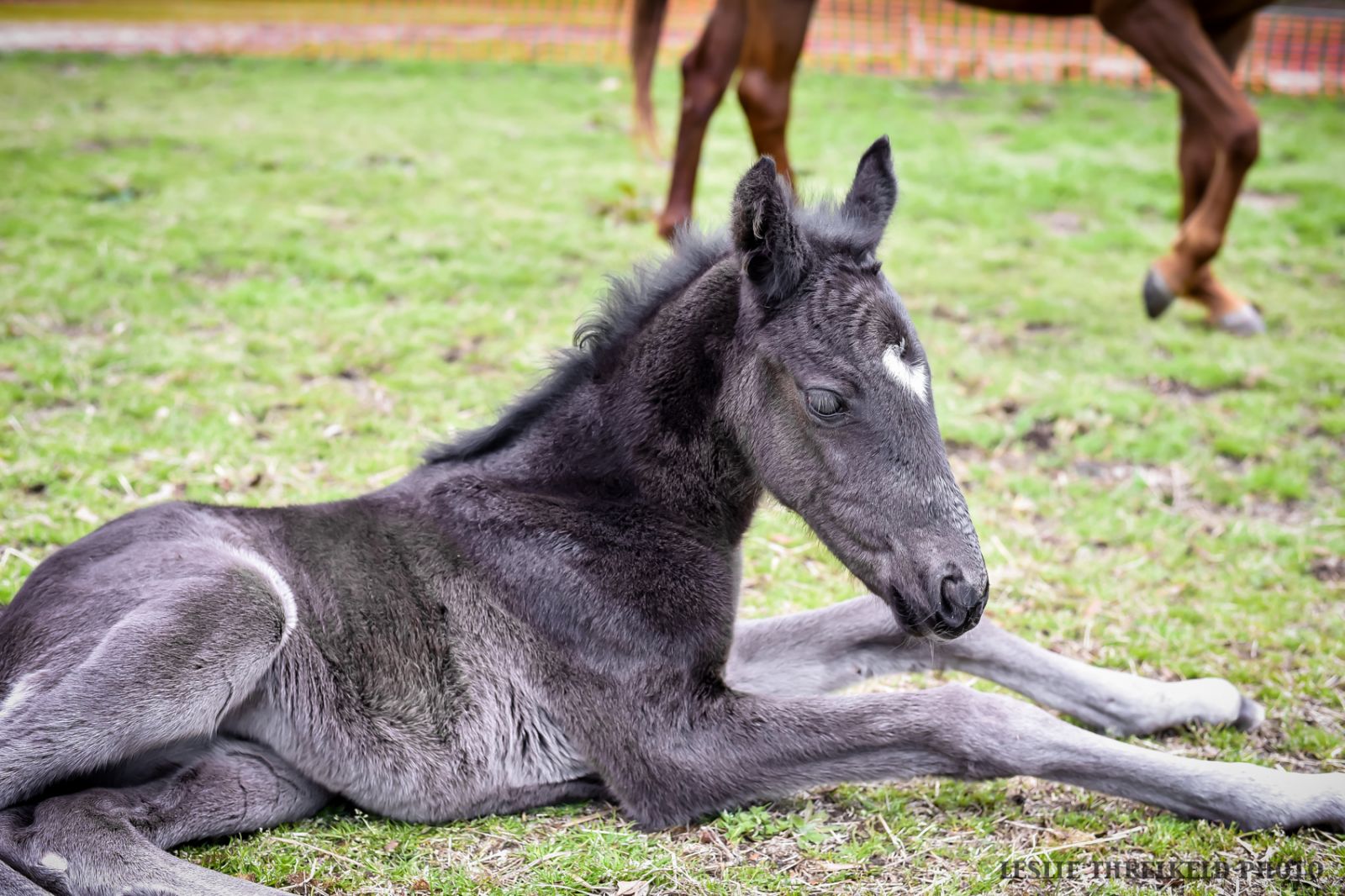 We were delighted with Fey’s first foaling, both in terms of her handling of the pregnancy, easy birth, and mothering skills. However, we did not breed her the following year when Corollary passed away unexpectedly. His death left a chasm both in the breeding program and the hearts of the Ketchen Place family. He was not just a foundation stallion but a member of the family. He was incredibly gentle with horses, humans, kids, and kitties. He could be trusted and relied upon to make the sometimes stressful act of live cover a relatively easy affair. His memory lives on, of course, in his offspring. They are fulfilling the dreams of their amateur owners as well as making a name for themselves climbing the levels of the sport. Preserving the memory of special beings such as Corollary is the gift given by successful breedings.

In the fall of 2018, Ketchen Place Farm acquired a new stallion called Gran Duque, a Thoroughbred by Rock Hampton (Storm Cat) out of Emeldir (Royal Applause). Sourced from the racetrack by Zeb Fry of Little Kentucky Farm, I was hired to photograph “Des,” who was intended to be sold as an event horse. His castration had been scheduled, but I was really impressed by, well, everything about him. Knowing KPF was looking for a new Thoroughbred stallion to incorporate into their breeding program, I encouraged the two parties to connect. KPF liked the stallion’s pedigree, rich with known sport horse producers and European influence, and especially appreciated his friendly demeanor. So the deal was done. 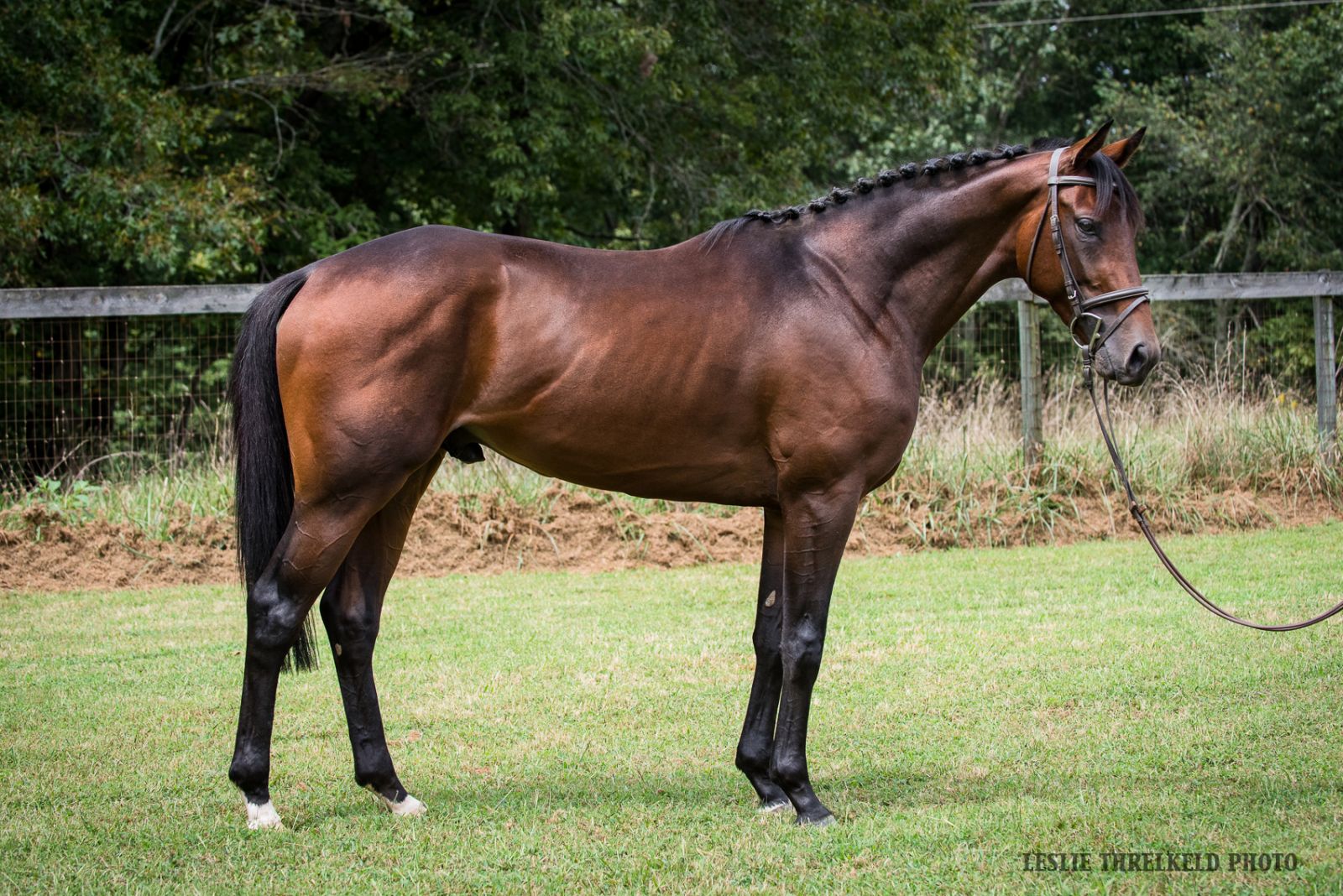 Fey was one of two KPF mares bred to Des in early 2019. Des turned out to be a natural at his new job and both mares became pregnant. They foaled within a week of each other in March 2020. Eighteenkaratgold, a Thoroughbred mare, had a pretty bay filly named Elwing (any Tolkien fans out there?). Fey, a Thoroughbred/Holsteiner, had a big, dark bay colt. 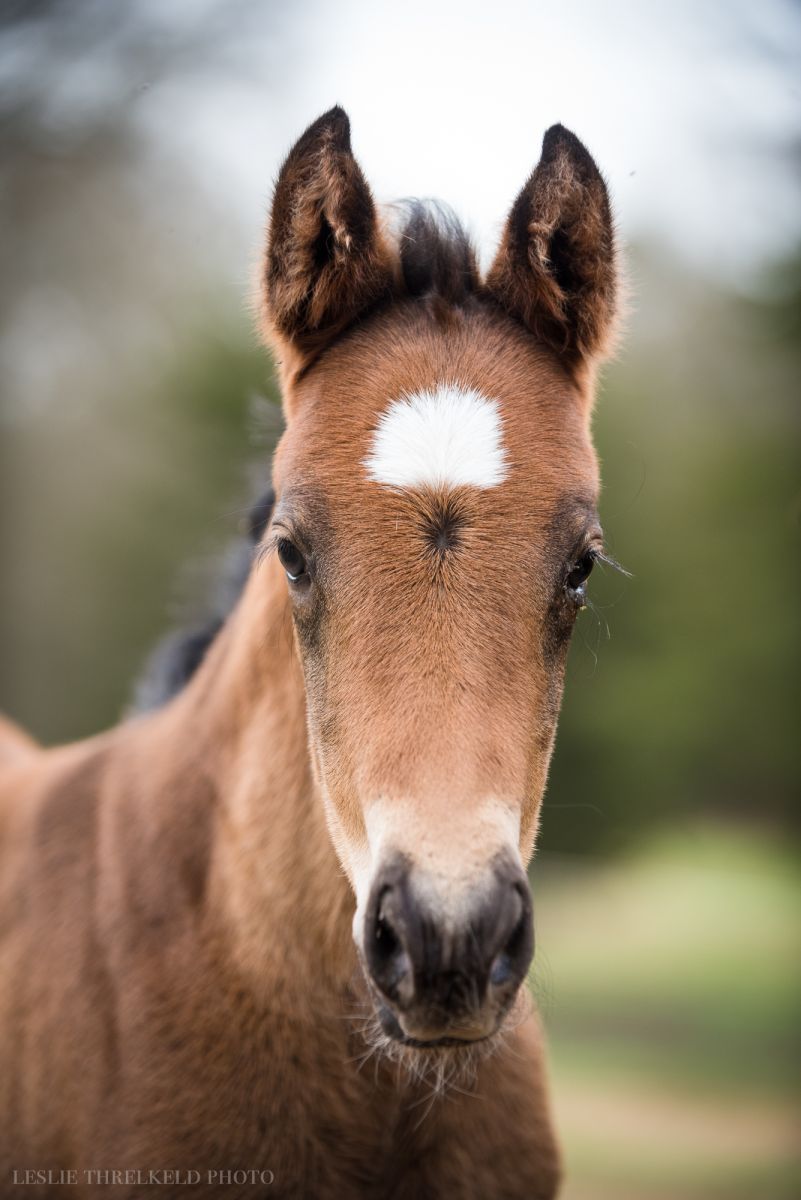 Once again Fey is proving to be a great mom, validating my intentions for her when I purchased Fey from her breeder, Elisa Wallace, when she was four years old. I bought her specifically because of her bloodlines and had been harboring an interest in her since she’d been born. Fey is out of Elisa’s four-star eventing mare, Leap of Faith, who sadly passed away last fall. Fey is also a product of the breeding program at the barn where I first started eventing as a kid.

Nancy Gosch, of Newnan, Georgia, was one of the first in America to breed sport horses specifically for eventing. She bred Fey’s sire, Cor Magnifique, who was the culmination of decades of careful pairings. Mrs. Gosch’s program can be traced back to the great steeplechaser Cormac, a stallion who has had more of an impact on eventing than is generally known, but I won’t jump on that soap box just now. If you’re interested to learn more, I wrote a feature article about Mrs. Gosch and her horses for Eventing USA in 2014. 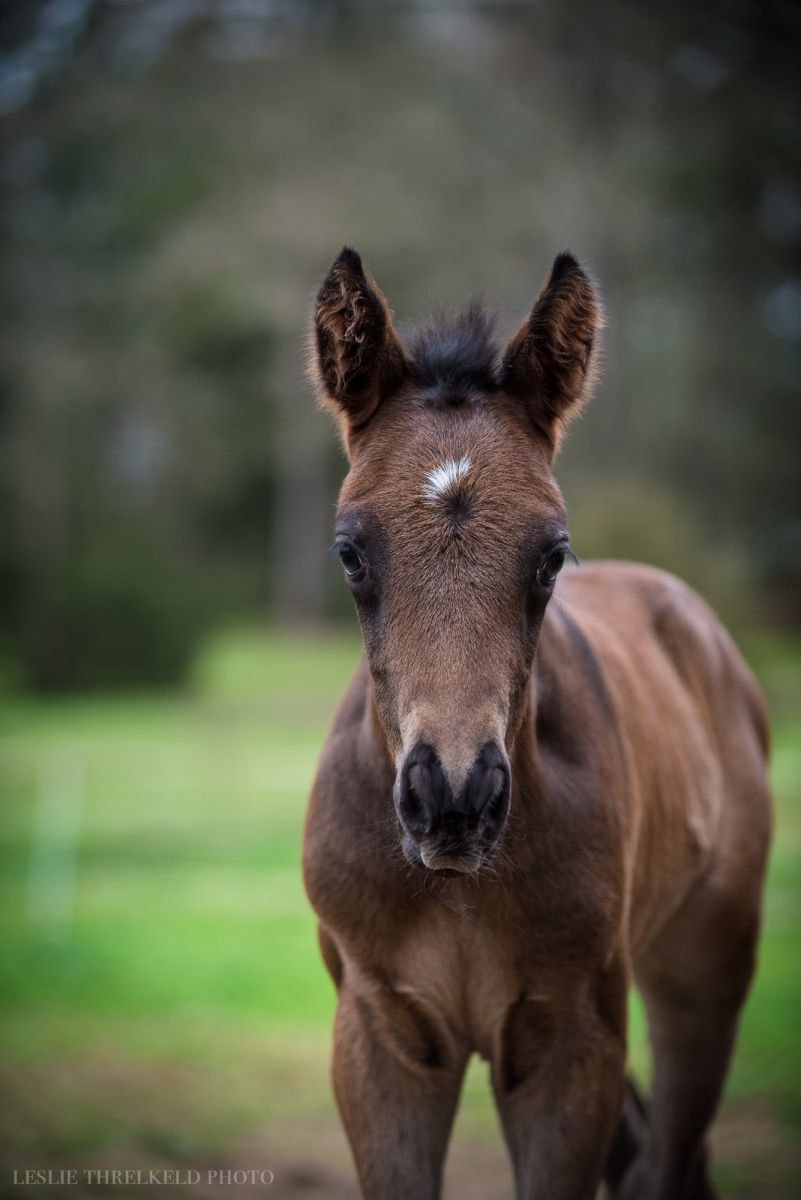 Back to Fey. I have a book of names, so I already had a name picked out for her second foal if it were a colt. And I was really, really hoping for a colt. Some people honor their loved ones with tattoos. Me? I name horses after them. Fey’s colt is called Cor Michael, which is a play on Carmichael, my late grandmother’s maiden name and a nod to our family’s Scottish ancestry. “Cor” of course is the prefix honoring Fey’s pedigree.

You know the old saying about leading horses to water? Well, you also can’t make them foal at a time that can be exactly predicted, and it is almost never convenient. Both times Fey has foaled at a polite 9-ish in the evening, but when she decided she was ready, there was little time to spare. Mary’s descriptions of both events have been similar: “She was acting normal then laid down quietly. So I thought I’d go take a peek and darned if there weren’t feet sticking out.” Sadly, I’ve missed both births. The first, I was driving on the interstate on my way to the farm. The second, I had tucked into dinner moments after checking the foal cam. But honestly, it’s okay. Fey was in good hands.

What we all need right now is … #foalspam! Introducing Fey’s second foal, a colt by Gran Duque born March 11. We are calling him Cor Michael for my late grandmother Helen Threlkeld, née Carmichael and our Scottish clancestry. Hope his cute face brightens your day! #cordefe #cormichael #sporthorsebreeding #futureeventhorse

Five years ago, I had a young mare with a family history close to my heart and a dream to keep that heritage alive. I also had no experience breeding horses. I was volunteering at a local event when I met Mary, and we arranged a photoshoot for her homebreds. Since then Mary has become one of my dearest friends and the person who has made the dream of having Fey-babies a reality. Her expertise and attention as a breeder has so far led to two successful, uneventful pregnancies. We are so fortunate to have two beautiful youngsters from Fey, but I am more grateful that Mary has taken such good care of my girl from the start. I am so excited for the futures in store for Fey’s offspring and the legacies of their ancestors that they will carry forward.

It goes without saying that these are trying times. Equestrian sport has come to a standstill and the whole world balances on the hopeful success of social distancing, clean hands, and functioning healthcare systems. We are all making sacrifices now for the sake of the future, but long days in quarantine can be dark, boring, and downright lonely. I encourage you all to find silver linings, look to the bright sides of life, and check in with each other often. If you still need a pick-me-up, remember it’s foal season, and #foalspam is headed your way! Breeders, don’t hold back. We need all the cute we can get!