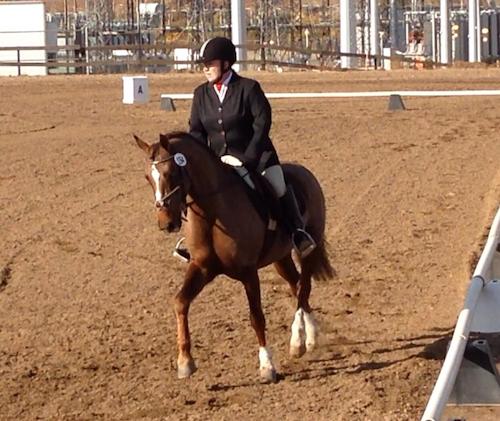 My totally awesome stock tie is probably what helped my score.

One of the best feelings in the world is the warm glow after making clear progress toward a goal that previously felt insurmountable. Even a small accomplishment can leave you feeling awesome for days.

This past weekend at Fresno County Horse Park, I received my best dressage score to date — a 42.9. I’m sure some of you closet Dressage Queens and Kings are thinking “… Is that it? That must be a typo. I’m sure she meant a 24.9.” No, my best effort in the sandbox to date stands at forty two point nine. I’m thrilled. This marks a significant step forward for me as a rider whose best tests were embarrassingly close to 50s. (It’s also worth noting, the judge at C was Loris Henry, so that made it extra cool.)

Admittedly, the score sheet is still full of comments about tension, but it’s still a big accomplishment me and my hot, feisty little mare.  Neither one of us particularly enjoys the sandbox, but it’s starting to come together. Dressage will probably always be my least favorite phase, but, in all honesty, the test I rode was actually kind of fun.

A score of 42.9 puts a clear mark on the chart of what is possible. This also makes a goal of “in the high 30s” attainable, rather than feeling like a silly daydream. With the new dressage tests out for 2014, I think I’m ready for winter. Time to really push toward finding three or four more points in my test.