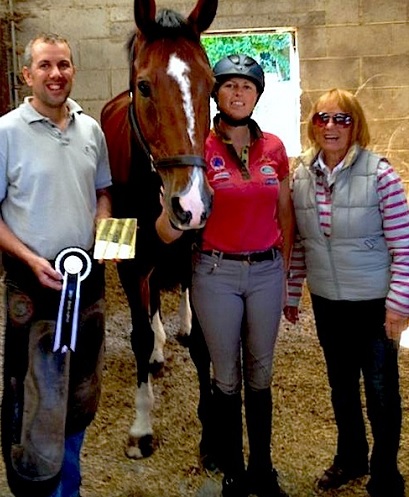 Fran Jurga of The Hoof Blog has written a fantastic article about the Best Shod Horse at the Land Rover Burghley Horse Trials this year.  While most CCIs have special awards for Best Dressed (rider) and Best Turned Out (horse), some events like Burghley traditionally have an extra prize for the farrier of the Best Shod horse.  This year, the award was not listed in the program, nor was it announced, and there was some confusion as to whether it was actually judged and presented.  Thanks to Fran’s research, it was indeed.  Fran caught up with Andrew Casserly who served as the hoof judge at Burghley, and tracked down the ultimate winner to talk about it.

This year’s recipient of the Best Shod award was Let’s Dance, ridden by Jeanette Brakewell and shod by Steve Arnold.  The mare’s shoes were handmade by Steve, perfectly fitted with special attention placed to the nail holes and stud holes.

Wouldn’t it be neat if we had some recognition for our best farriers at three-days in the USA?  There are definitely some hoof care professionals who deserve to have their work rewarded…and perhaps some others who could be encouraged to step up their game a little bit.

Read more at The Hoof Blog and check out the full article, with quotes from the judge’s perspective and how Steve crafted the winning shoes.  Consider showing it to your farrier, as well!