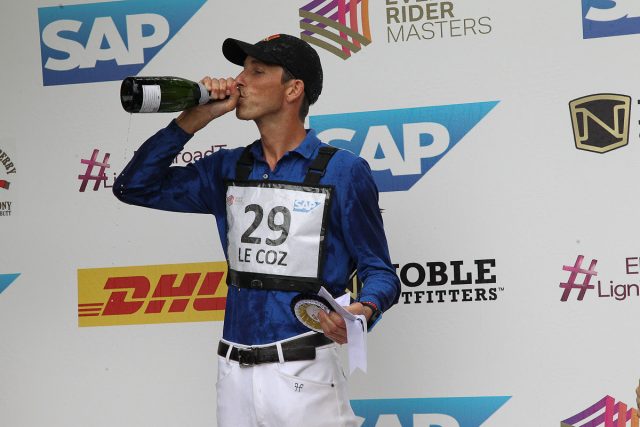 Frenchman Gireg le Coz rode Aisprit de la Loge to the ERM Jardy win in just the horse’s second attempt at this level. They were the only combination to finish on their dressage score, which allowed them to climb from 11th place after the first phase into the top spot. Photo courtesy of Event Rider Masters.

It’s a truth universally acknowledged that an Event Rider Masters leg, quietly referred to as a dressage competition, must surely be in want of some serious excitement on the second day – and Leg Four at Haras de Jardy certainly didn’t disappoint.

After a heated battle between the boards yesterday, the scores were at an all-time low — and with the top 20 competitors sitting within two rails of one another, there wasn’t going to be any margin for error as we headed into the showjumping and cross-country phases today.

Just eleven horse-and-rider combinations would produce clear rounds inside the time over the poles, sending some well-placed combinations tumbling down the leaderboard and opening the door for others to begin their ascent. Among those major movers was Germany’s Felix Etzel, who toppled two rails with Bandit 436 and dropped from fourth place to twentieth. New Zealand’s Jonelle Price, hot in pursuit of valuable series points, delivered a clear round just outside the optimum time to move from fourteenth to ninth with Grovine de Reve.

But at the conclusion of the influential showjumping phase, the top of the leaderboard remained untouched: France’s Lt. Col. Thibaut Vallette and his Olympic partner Qing du Briot ENE HN had added just 1.6 time penalties to their dressage score of 23.2, keeping them less than one second ahead of second-placed Gemma Tattersall and Quicklook V. 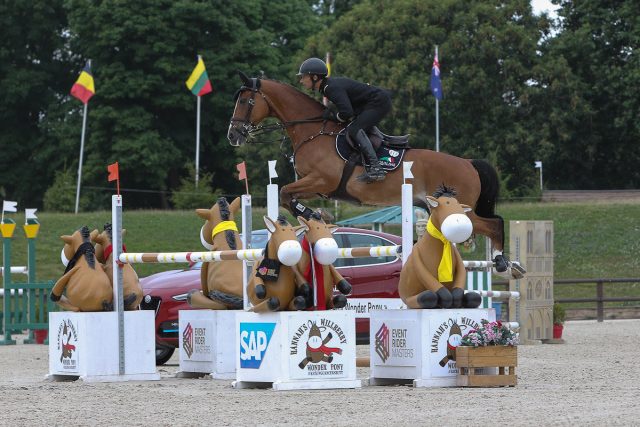 But there’s no such thing as a certainty in eventing, and even less so in the fast-paced, high-tension tracks of the Event Rider Masters. Jardy’s course featured classic French design by Pierre Michelet — a true master of creating tough and technical tracks over flat landscapes, he created a veritable go-kart track with questions that didn’t relent until competitors had crossed the finish line.

Time would prove to be one of the most influential factors on the course, which saw 20 combinations come home clear but just two finish inside the optimum time. 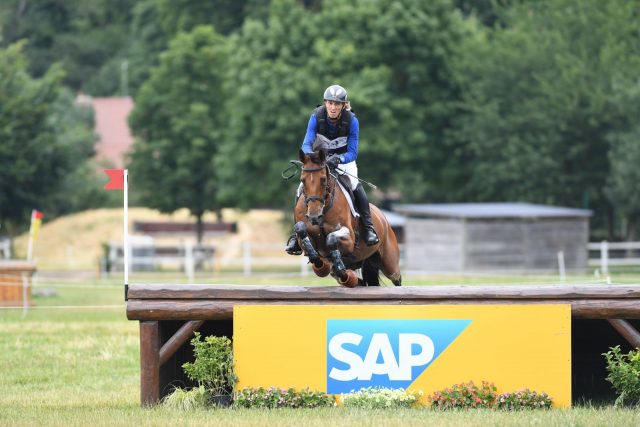 One of those double-clear finishers was France’s Gireg le Coz, who rode his nine-year-old Selle Français gelding Aisprit de la Loge in just the horse’s second attempt at this level. They were the only combination to finish on their dressage score, which allowed them to climb from 11th place after the first phase to take the win.

“I can’t believe it,” says Gireg, who debuted the horse at the CCI4*-S level at the Arville leg of the 2019 Event Rider Masters series last month, finishing sixth. “My horse was amazing, from the dressage through to the end of the cross-country — he’s been so good. He’s only a nine-year-old, but he’s so honest.”

That honesty, and the horse’s careful production, allowed the pair to make light work of what could have been a sticky moment at the water: “I didn’t have the stride that I wanted, but he was very honest. He feels much more experienced now in jumping between the flags.”

Gireg takes home a cheque for €18,000 and collects valuable series points too – he now sits fourth in the 2019 rankings on 51 points. But will we see him at any more legs this year? 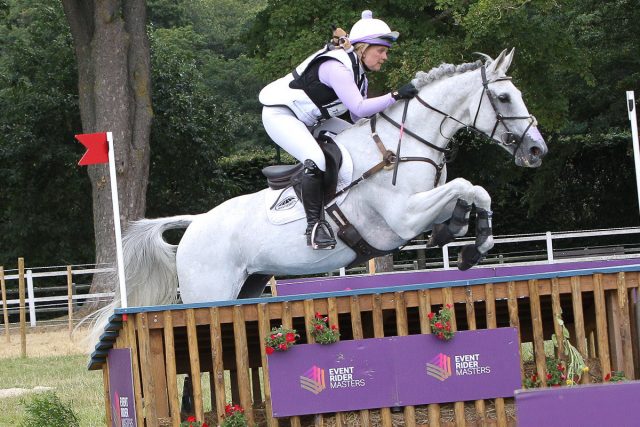 Just a tenth of a penalty precluded a win for 2017 ERM champion Gemma Tattersall and Quicklook V, who added 3.2 time penalties in a bold and determined trip across Michelet’s track.

“That [tenth of a penalty] will be my badly-ridden flying change,” laughs Gemma, who lost out on valuable marks in yesterday’s otherwise remarkable test when she earned fours for one of the changes. “She’s put in a great performance this weekend, and I’m so proud of her. There was a lot of determination [on course], to be honest. She gave me a bit of a heart attack near the end of the course – I lost my steering for some reason, but we managed to stay inside the flags!” 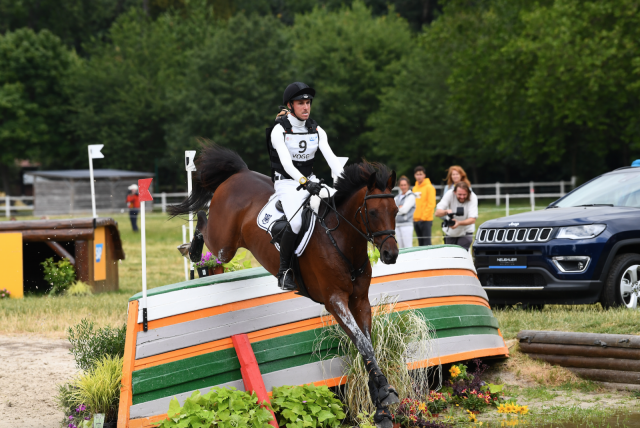 “I think I have a pretty good horse — it was his first outing again after a big event,” explains the Swiss rider, who has recently relocated back to Europe after a stint in the US. He and Colero finished sixth at this spring’s Land Rover Kentucky CCI5*, marking a successful end to their time abroad.

Nevertheless, says Felix, “I didn’t expect [this result] when I came here — there are so many good riders and good horses, so I’m very happy.”

Last year’s winner Alex Bragg delivered one of the two double-clears of the day to finish fourth, this time riding the exciting young up-and-comer Alcatraz.

“You need a good horse, a nippy horse, and they need to be really genuine,” he says of Michelet’s testing track, which saw experienced competitors, including Tim Priceand Sarah ‘Cutty’ Cohen, falter. “The strides get so big when the horses are going fast, but you’ve still got to be able to adjust when you come around the corner. I’m thrilled with Alcatraz; to very nearly finish on his dressage score, bar that single second in the showjumping, is a real personal best for him, and I’m thrilled to be back on the podium.”

The shock withdrawal of series leader Chris Burton left the door wide open for a new face at the top spot, and consummate competitor Jonelle Price duly stepped up to the plate. She finished sixth with Grovine de Reve, adding 0.8 time penalties in the showjumping and a further 2 across the country, but putting her in the lead for the series title by 7 points.

“I’m really pleased with the horse,” she says of the young star. “Obviously in a field as competitive as the one we’ve got today, every second counts. He had a little look at the first water and needed a little reminder, but he’s a very genuine horse and I’m really excited to see where our relationship will go.”

Chris Burton drops to third in the 2019 leaderboard, while fellow Aussie Bill Levettslips into second place after a ninth-place finish today with his ERM specialist Shannondale Titan.

The fifth leg of the 2019 Event Rider Masters Series heads to Ireland for the first time, as we make our debut at Co. Cork’s stunning Millstreet International Horse Trials. Expect fierce competition and one of the toughest cross-country challenges of the season as a first-class field takes to the fairytale grounds of Drishane Castle in hot pursuit of a place on the podium.

With two legs left to go, it isn’t over ’til it’s over. We’ll be bringing you all the action as it happens on eventridermasters.tv. Don’t miss it.

Want to take a deeper dive into the world of ERM? Make sure you download EquiRatings Stacks, the high-stakes prediction game that can win you an iPad. Want to get ahead of the competition? Head over to the Prediction Centre to see how your favourites stack up against the competition. Then, jump into the SAP Spectator Judging app to see how you fare against our experienced panel of judges. Nail the predictions, win points, and earn fantastic prizes in our brand-new Fan League. Plus, don’t forget to check out — and donate to! — ERM’s 2019 charity, Hannah’s Willberry Wonder Pony.

This report is edited from a press release.