Did you knew Clayton Fredericks is more than just the Canadian team coach? He’s also running a very successful business importing quality young horses from Europe, as Frankie Thieriot recently discovered when she found her newest partner Chatwin. Many thanks to Frankie for writing, and best of luck with Chatwin! Visit www.fredericksequestrian.com. 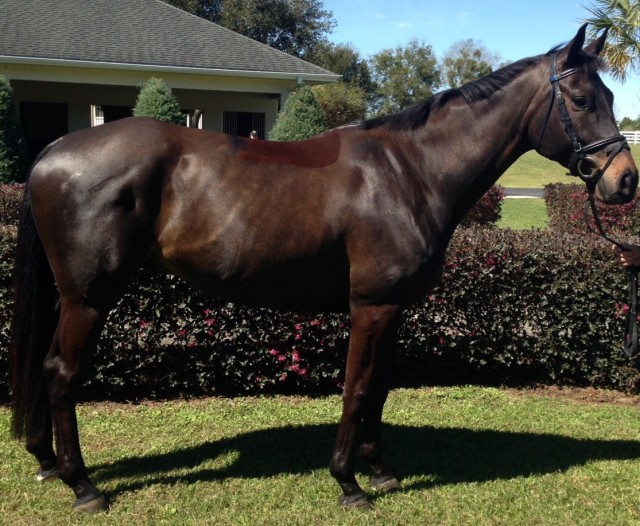 Like many people out there, I have been in search of the perfect man for a few years now … no, not that kind of man. I found him several years ago, and I’m lucky enough to be marrying him next year. I am talking about a new four-legged man in this case.

In my particular case, I was looking for my next upper-level partner and a horse that was talented and could also supplement my abilities and riding fitness for my current two-star horse Uphoria. As an adult amateur who rides at the upper levels while simultaneously working countless hours a week running my own company, which keeps me out of the saddle, I wanted to get a young horse who I could log more time on because it is quite difficult — despite working out daily — to get in proper riding shape with just one horse to ride.

I have had my eyes open for a couple years now and tried several horses, but none really seemed to be the one. I thought about traveling overseas and had some feelers out but — to be honest — as an amateur,  the thought of going abroad to horse shop seemed so overwhelming and, of course, expensive. How do you know whom you can trust when it comes to the broker, vet check and everything in between?

On a recent trip to look at horses in Florida, I remembered that Clayton Fredericks had mentioned he was importing some horses to sell when I toured his farm last year for my work with US Eventing TV. Obviously being an Olympian and proven champion as a rider, I knew Clayton had a great eye for horses and decided to contact him to see if he had anything I could see while I was in Florida.

As luck would have it, he had several promising youngsters for me to look at. I was quite surprised to be honest at how much his business was really geared toward importing a wide range of great horses to sell, as I had thought of him mostly as the new Canadian coach up until this point. The thing that impressed me most, though, was that Clayton — having seen me ride at the AECs — told me that he had several for sale, but one in particular that after seeing me ride he felt would be a good match.

I headed to Florida open minded that I may or may not find what I had been searching for, and after trying several horses at several other barns, got to Clayton’s and was pleasantly surprised by how many lovely horses he had for me to look at! After trying a few, I got on the one he had told me might be the one I had been looking for and a good match on the phone, and, as it turns out, he could not have been more right.

As I said, I have ridden several horses, even vetted one in the last few years, that did not work out, but none of those made me feel the way this one did when I sat in the saddle. The moment I jumped this horse, I knew I had to have him! He felt like putting on old tennis shoes. I immediately felt comfortable, safe and excited because there was something about him that even over the first cross rail felt weirdly similar to my longtime partner and Advanced horse Fric Frac Berence. Never did I ever think there was a horse in this world that could feel like Fric underneath me, and I didn’t stop grinning the rest of the day! How Clayton could have watched me ride once at the AECs and matched me to this horse I have no idea, but he certainly did.

The thing that impressed me most about trying horses at Fredericks Equestrian was that I never felt pressured. In fact, they were even kind enough to offer to let me come back the next day to flat the two horses I liked most on my own, which really made me feel comfortable in my choice. I took them both cross-country schooling as well, and because of that, I could make a decision easily and confidently in purchasing a horse. The best part was also that I never felt like they would have thought I had wasted their time if I had not ended up purchasing any of their horses, which I was always a bit afraid of when going to barns to try potential partners.

Another thing I realized when looking at the situation was that my new horse was imported from Germany a few months ago and has since been trained daily, ridden and even shown by an Olympic rider, giving him incredible fundamentals, especially for his age, and a remarkable foundation.

If you are like I was and are searching for a quality horse to be your next partner, it is a relief to know these horses can be found in the U.S. at someone’s barn who can be trusted, professional and understanding through the purchasing process. I was able to save the costs of going overseas, and I am happy to say I have found my perfect man … again!

I cannot wait to see what my future has in store with this horse, and Uphoria has a new travel buddy for all of our adventures. If you are searching for your perfect horse, I know it can be overwhelming, but I am here to tell you good things come to those who wait … or, I guess, those who call the Canadian Team Coach Clayton Fredericks, in my case.