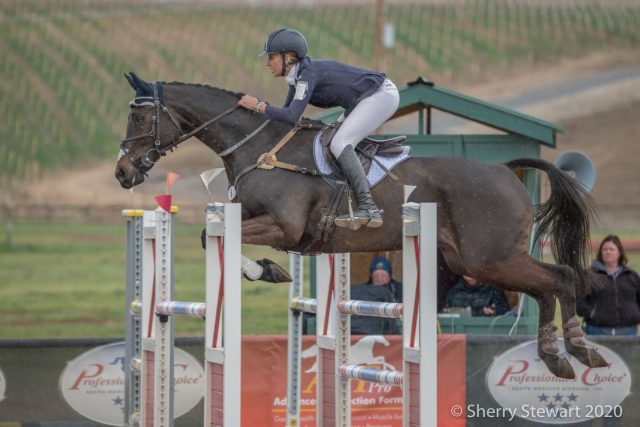 It was almost 20 years ago that the Baxter family purchased 500 acres in the sleepy Central California Coast town of Paso Robles. Where others saw fallow farmland, they saw the potential for international equestrian competition. And it was international competitors, Frankie Thieriot Stutes and Tamra Smith, who led the Advanced division at the Feb. 28-March 1 Winter Horse Trials, staged by the Baxters and their Twin Rivers Ranch team.

The team has grown and the venue has transformed in those nearly 20 years, but the mission remains the same: providing a West Coast stage for the pursuit of equestrian dreams at all levels — and to doing so with a distinctly California accent of warm, welcome-to-the-family hospitality. When they’re not out doing the myriad tasks that make Twin Rivers a favorite West Coast eventing destination, owners Connie and Jeff Baxter can often be found behind the central gathering spot’s outdoor bar, serving friends new and old with a smile. Their daughter Andrea Baxter contributes in many ways while pursuing her 5* eventing career. This weekend, she finished fourth on her feisty Thoroughbred mare, Indy 500, in the Advanced division. 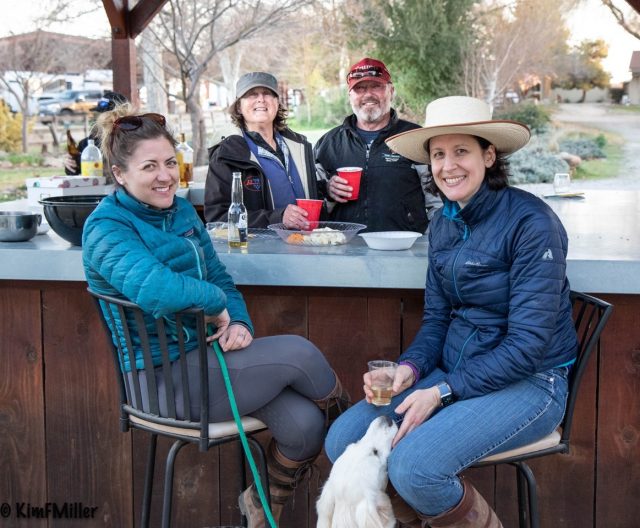 Three hundred-plus pairs, from throughout the region, filled five dressage courts on Friday. Over the weekend, they tackled Hugh Lochore and Marc Grandia’s upper and lower level cross-country courses and the challenging Jose Nava-designed show jumping routes. With show secretary Christina Gray of Gray Area Events at the logistical helm, the schedule ran smoothly and all horses and riders made it back to their barns or beds safely every day.

The overall outcome bodes well for the Twin Rivers Spring International, April 10-12, which includes the debut of the CCI4*-Long division, one of only six events in the United States to host this rigorous level of competition. 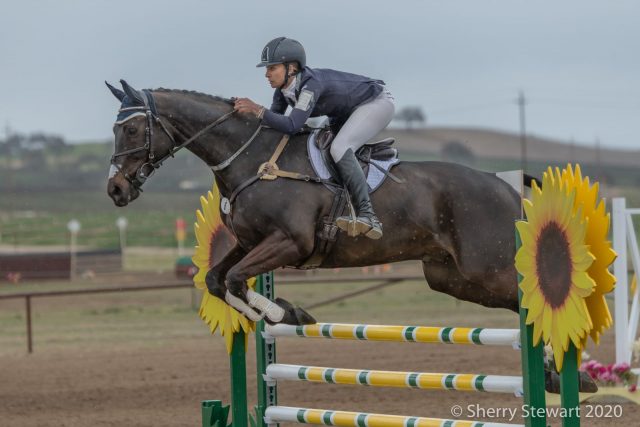 Frankie Thieriot Stutes and the Chatwin Group’s Chatwin were double clear over Jose Nava’s show jumping track to hold their lead. The rider was thrilled after cross-country to simply have her 5* partner back in form after health issues last year. His rideability and form made for an effort Thieriot Stutes described as one of Chatwin’s best ever.

“I usually have to halt him several times in the warm-up, and today I didn’t need to,” the rider said. It’s a testament to how he’s feeling and a culmination of strength, fitness and technique work advised by team members including USEF Eventing Performance Director Erik Duvander and Thieriot’s close friend and peer, Tamra Smith. “Because we have such a good team behind us, we’re the ones who just get to do the fun stuff!” Thieriot Stutes noted.

She praised many facility upgrades that help amplify the atmosphere. Named to the USEF Pre-Elite Training List, Thieriot Stutes and Chatwin are prepping for the Land Rover Kentucky and beyond. “It’s really great to see what the Baxters have done to make it feel like a big round in a big place,” she said of the Sunday scene. The day’s forecasted rain finally loosed a few drops for the final division’s jumping. Along with the heightened atmosphere, “That was really good preparation for the horses.” 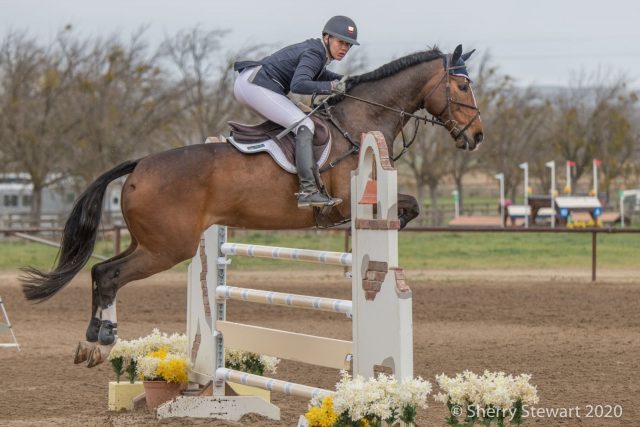 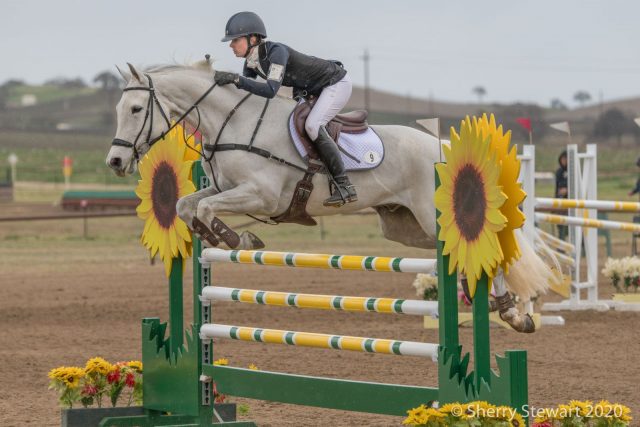 Downing one rail and staying in their overnight position were Helen Bouscaren and Ebay.

The original field of 13 was led by Smith and Mai Baum, whose 18.4 dressage test would have been tough to surmount. However, they’d withdrawn after dressage by prior plan per their Kentucky preparation.

Duvander now spends a quarter of his time on the West Coast, coaching and monitoring team riders and those who may be contenders for it in the future. “It’s good to see how well they came out of last year and they are both stronger,” he said of Thieriot Stutes and Chatwin and Smith and Mai Baum. He also works with West Coast members of US Equestrian’s Eventing 25 list, for their coach Leslie Law. These include Madison Temkin, Megan Sykes and Kaylawna Smith-Cook, all of whom held their own at Advanced: it was the first completion at the level for Sykes and Smith-Cook. 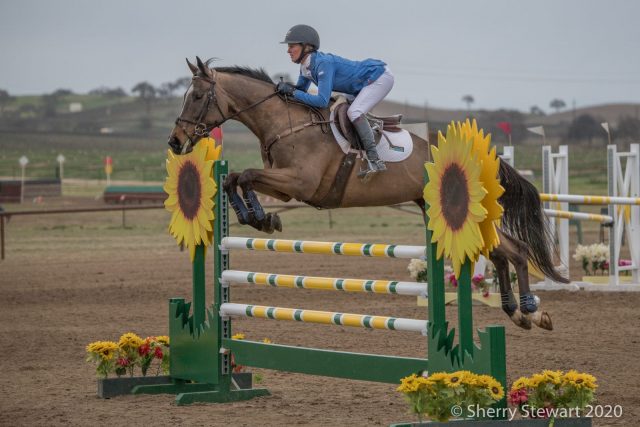 “It’s not just coaching,” Duvander said of his USEF role when discussing the caliber of competition in the West. “Every time I come to Twin Rivers, I’m noticing the amount of work. They are constantly upping the game here.” The USEF’s commitment to riders in the West coincides and to some extent has helped prompt coordinated efforts among riders, owners and organizers to raise the bar in all facets of competition. “In the past it was often said that you need to go East to make it, but it’s really important that riders be able to make it out here. Then, they can go back East and win. That should be the mindset.” 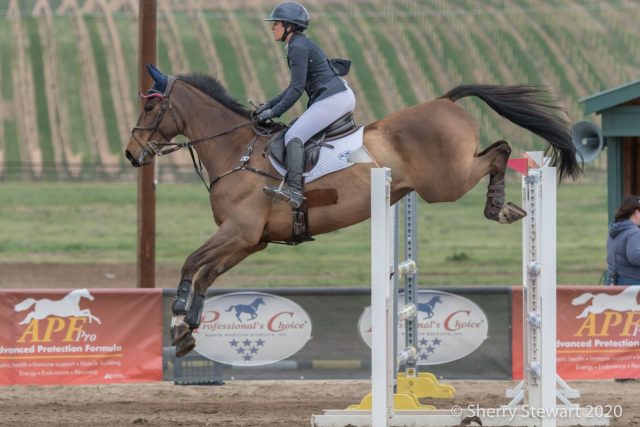 Lauren Billys and her Rio Olympics partner Castle Larchfield Purdy will be staying West in their prep for the 2020 Olympics, representing Puerto Rico. Phase one went perfectly with a wire-to-wire win at Intermediate. Nava’s roll-back and turning course enabled Billys to stay on plan with prioritizing efficient turns and accurate tracks to stay within the time. On Saturday’s cross-country, by new Twin Rivers upper level designer, Hugh Lochore, the pair picked up only .4 time penalty. They sealed the victory with double clear show jumping to finish on a 28.2. 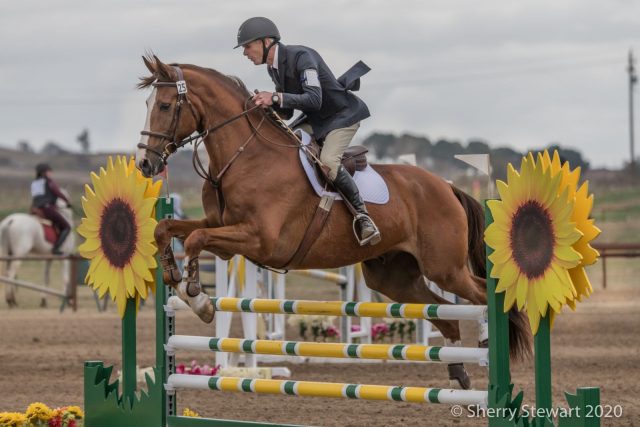 Derek di Grazia and Ringwood Justice were also double clear with elegantly executed angles throughout the track. They moved up from fourth to second for a 33.5 finish. 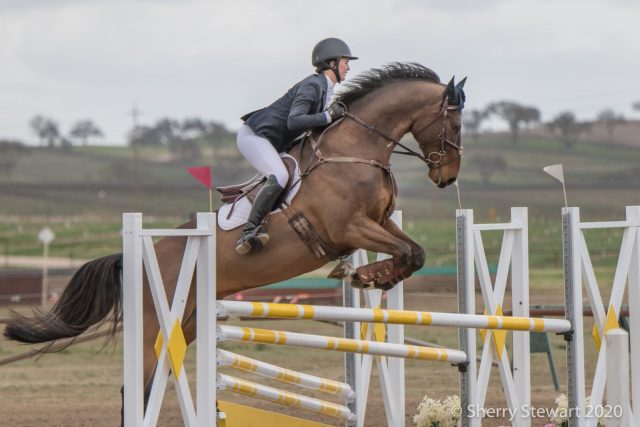 Eneya Jenkins and Lawtown Boy had two rails, to finish third with a 36.4. 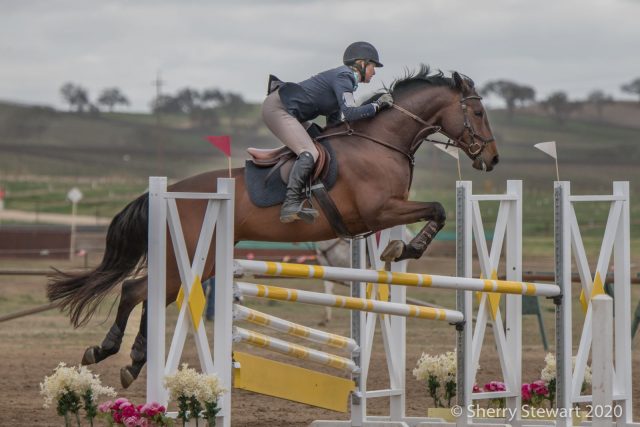 Fifteen-year-old Bruce Hill wasn’t pleased with himself, but had nothing but praise for his partner, Bossinova, in maintaining the lead in the Preliminary Jr/YR division with a clean effort: “He saved my butt!”

There was no room for rails or time faults, and the student of Trinity Eventing acknowledged he was a little nervous in the warm-up. “But my horse is awesome!” The pair assumed the lead after cross-country and finished on their dressage score of 28.5. 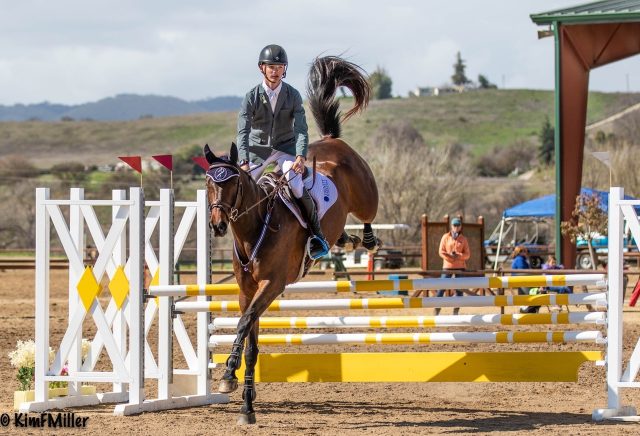 Haley Turner and Shadow Inspector were second on a 29.9 and Kathryn Canario, and Kiltubrid Rhapsody finished on their dressage score, 30.9, to maintain third place.

In the Preliminary Rider division, Alliston Eventing student India McEvoy held the one and two spots with E’Zara and Red Bull, respectively. The small animal veterinarian was thrilled with both horses’ performance. The 7 -year-old Red Bull had held the lead thanks to his lovely dressage test and 22 score, but show jumping is still a nerve-wracking venue for the Redwine youngster. Two rails Sunday forced him to hand the top spot to his more seasoned stablemate. E’Zara had a tougher time with dressage but was error free jumping, in and out of the ring, to take the win.

Madeleine Moore and Rogadina moved up steadily to finish third on a 41.6. 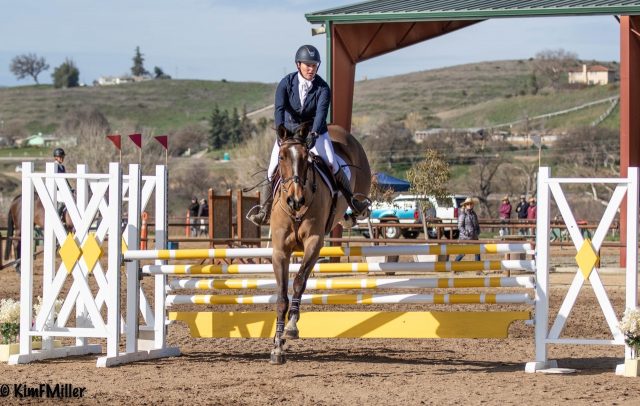 In the Open Preliminary, Lauren Burnell and Freedom Hill were unbeatable from their Friday 24.1 dressage score on through the weekend. Double-clear show jumping was easy, breezy, beautiful to the point that even their coach, Bec Braitling, couldn’t catch them. Braitling and Kirschblute 3 had a tiny time penalty, .4, in show jumping, dropping them to third, while James Alliston and Calaro went clean to finish second on a 26.7.

Riders weren’t the only winners this weekend. Among the many volunteers needed to make the competition successful, Leslie van der Wal drew the winning raffle ticket for a generous prize pack donated by Twin Rivers sponsors. The Twin Rivers Ranch season is presented by Professional’s Choice and Auburn Labs. The Riding Warehouse and Best Western PLUS Black Oak are supporting sponsors. The volunteer grand prizes included a bottle of Auburn Labs’ APF, a Professional’s Choice tote bag, and a $50 Riding Warehouse certificate. The prize pack raffle represents phase-one of an incentive program to reward this important role in the sport.

With a fundraising Combined Test set for April 4-5 and an anticipated 500-plus turn-out for the April 10-12 Spring International and its inaugural CCI4*-Long, those volunteers will be even more valuable going forward.

Along with highest level competition, plans for the Spring International include an enhanced Vendor Village, a Friday night wine tasting and amenities intended to further support and expand the equestrian family that revolves around Twin Rivers Ranch.

For complete results, schedule and other information: www.twinrivershorsepark.com.