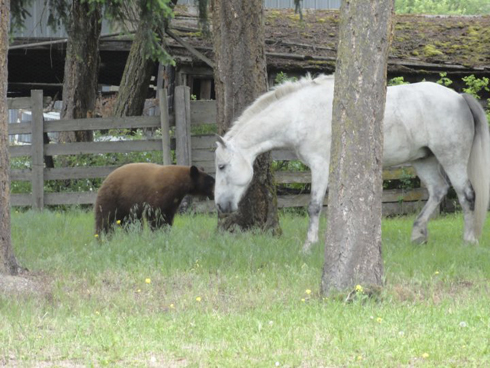 Horse & Hound got its paws on these incredible photos of Jack Frost, a Connemara Pony, making friends with a cinnamon bear in British Columbia. While these bears are native to western Canada, it’s not every day you see one snuggling up to pony. I’m going to use this picture for a pre-show pump up for my OTTB before our dressage show on Sunday. If Jack the pony has the nerve to make friends with a bear, she can certainly get through a dressage test without spooking at the flower boxes.

In other news, the North American Junior & Young Rider Championships are well underway at the Kentucky Horse Park in Lexington, Ky. CCI2* dressage begins at 7 a.m., and all eventing competitors have a scheduled jump school at 11 a.m. Kate rounded up a variety of NAJYRC photos that we’ll be posting at 9 a.m. EST, so be sure to check those out. Stay tuned to EN for all your eventing news from Young Riders. Go NAJYRC, and go eventing.

It’s not every day Mark Todd serves as your start box steward. U.S. rider Meaghan Marinovich, who lives and trains in England, was quite surprised to find Toddy volunteering at the Dauntsey Horse Trials. He had competed earlier in the day and wanted to enjoy the beautiful weather. Bless him. [FLAIR Blog]

Meet Andrew Nicholson, leading three-day event rider and apparent GQ model. Horse & Hound visited Andrew’s home base in Wiltshire, England, to snap some candid shots of the Silver Fox. It’s not easy to look this good, but somebody has to do it. [Horse & Hound]

Zara Phillips’ pregnancy has sparked a debate on the safety of continuing to ride while pregnant. Zara fell in the CIC2* at Barbury a few days before announcing her pregnancy, which led to a major kerfuffle in the British newspapers. [Horse & Hound]

Point Two has renewed its partnership as the Official Air Jacket of the USEA. In addition, Point Two will support the 2013 Nutrena American Eventing Championships, the SmartPak USEA Classic Series and the Adequan USEA Gold Cup Series. [USEA]

A British father may have to cough up £4000 to pay for his daughter’s iPad horse games. While the games were free to download, 8-year-old Lily approved 74 total transactions of add-ons that totaled to more than £2000 in just six days. [Horsetalk]

More than 45,000 people are expected to attend the Festival of British Eventing next month. Our own Samantha Clark will be on the ground to bring you all the action from Gatcombe, where 290 entries have been received thus far. [British Eventing]

SmartPak Product of the Day: My new obsession is Back on Track. Somehow I had no idea Back on Track made HUMAN products. Shirts, socks, gloves — there’s something for every part of my body I’ve destroyed by repeatedly falling off. [SmartPak]

http://www.youtube.com/watch?v=E8XIT7YxSXE
How NOT to jump a bounce, as seen on Horse Nation