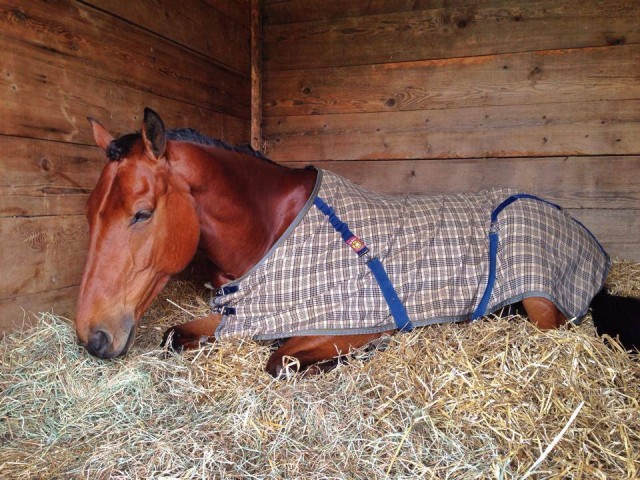 Nyls Du Terroir after a double clean show jumping round in the Fair Hill CIC3*. Photo via Kate Samuels.

A few riders are getting in some last-minute prep for Rolex at events this weekend. Phillip Dutton is riding Otis Barbotiere and Shamwari 4 at Fair Hill, and both horses have been removed from the Rolex entry list, meaning Boyd Martin won’t be trying to get in some dressage practice with his broken leg. Rolex riders Colleen Rutledge and Shiraz, Daniel Clasing and Houston, Selena O’Hanlon with Bellaney Rock and Foxwood High, and Jan Byyny and Inmidair are all getting in final prep at Fair Hill.

The CIC3* division at Fair Hill did both dressage and show jumping today, Kurt Martin and Anna Bella moved to the lead on 46.5 after jumping double clear, one of just three pairs to do so — the others being own own Kate Samuels and Nyls Du Terroir and Kendal Lehari and Totally Frank. Sharon White and Under Suspection dropped one rail to remain in second on 47.8, and Phillip Dutton and Shamwari 4 pulled two rails to drop from first to third on 51.5.

Lucia Strini and Sammy Jo lead the CIC2* division on 45.8 at Fair Hill, which just did dressage today. Lillian Heard and LCC Barnaby are in second place on 50.3., and Waylon Roberts and Yarrow are in third on 50.5. Waylon and Bill Owen lead the CIC* on 43.1 after dressage, with Chase Shipka and Victory Shetan in second on 43.4 and Allie Nelson and Total Eclipse in third on 46.9. Live scores are lagging a bit in the Open Intermediate and Advanced divisions. Click here to follow along with those.

The action also got underway today at Holly Hill, where Rolex bound Julie Norman and Consensus are the only pair in the Advanced/Intermediate combined test; they scored 37.5 in dressage. In the Open Intermediate division, Heather Morris is sitting in both first and second after dressage and show jumping with Europop and Patent Pending on scores of 35.6 and 36.7, respectively. Alyssa Phillips and Bliss III are in third on 42.2. Click here for a rundown of scores in all the divisions at Holly Hill. 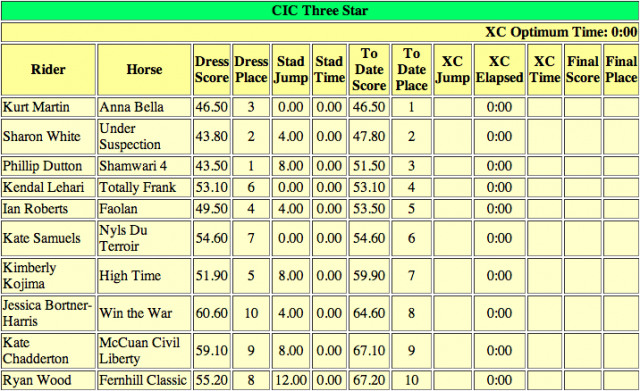