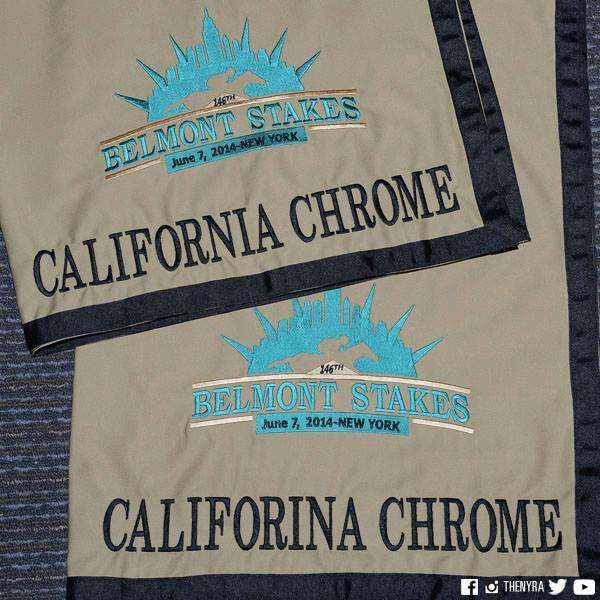 Thoroughbred racing has always spawned track superstitions, but California Chrome’s connections are turning theirs into a benefit for St. Jude’s Children’s Research Hospital.

The racing industry is famous for its superstitions ranging from the laughable to the bizarre–don’t put any brooms on the trailer when shipping a horse, hang garlic in your barn aisle but don’t eat peanuts, a horse with a gray streak in his tail is lucky. The origins of a lot of these superstitions have been lost to history and time, but the belief remains.

Art Sherman, trainer of Triple Crown-contender California Chrome, is no different. So when Churchill Downs accidentally misspelled California Chrome as “Califorina Chrome” on the colt’s saddlecloth, who then went on to win the Kentucky Derby, Sherman decided the misspelling was good luck. While Churchill Downs quickly presented Sherman with corrected saddlecloths, the horse wore the misspelled cloth for his workouts and a new superstition was born.

Not to “curse” the colt, Pimlico copied Churchill’s typo purposely and supplied him with a pair of saddlecloths including both correct and incorrect spellings. Belmont Park has followed suit, and if track superstitions have any truth to them at all then California Chrome is ready to make history.

This time, however, Art Sherman and his son Alan, partnering with California Chrome’s jockey Victor Espinoza, plan to sign and then auction off the misspelled Belmont saddle cloth with the proceeds donated to St. Jude’s Children’s Research Hospital. This facility is devoted entirely to the research and curing of pediatric diseases. Alan Sherman stated that St. Jude’s is always his charity of choice.

Whether your believe that racetrack superstition will be on the colt’s side or that California Chrome makes his own luck, we can all agree that benefiting charity can do nothing but good work. Go California Chrome!

P.S. On a related note, the California Chrome vs. Opossum craziness continues — it appears that Belmont has made the critter some honorary saddlecloths (with alternate spellings as well!):

I heard rumors that @DAPossum1 was aiming to the Metropolitan, but then I saw his saddle cloth.. look out @CalChrome! pic.twitter.com/wngOfrFWh8

These guys do look race-ready:

@CalChrome If possums are following you, nature, people, the world is behind you…I’m so excited, Good, Good, Luck!!! Dreams for real!