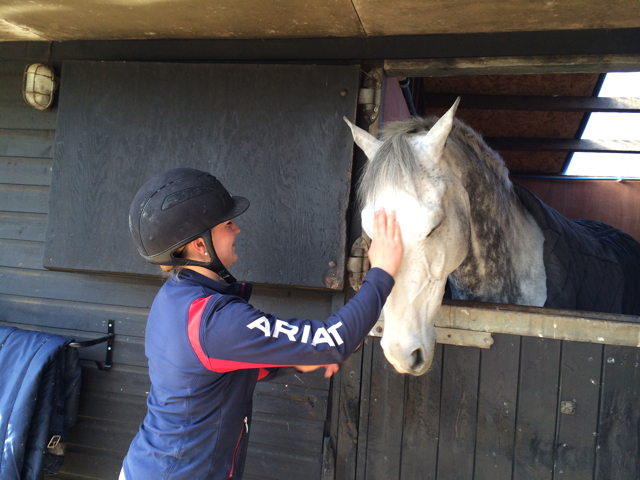 EN’s own Samantha Clark moved back home to England this fall, and since then she’s been catching up with some of our North American riders who are now based across the pond. She recently interviewed Tiana Coudray for the PRO blog, and PRO and Samantha have been kind enough to allow us to run a portion of the story here on EN. Tiana and Ringwood Magister were just named to the USEF Eventing High Performance Winter/Spring World Class Training List, and they’re hard at work preparing for the 2014 season. Read below for the first part of the story, and follow the link for more photos and a video interview with Tiana.

From the PRO Blog:

When Tiana Coudray came over to England in June of 2011 with Ringwood Magister to prepare for the Blenheim Palace CCI*** she expected to return home to California directly after the competition. Fast forward to today and she’s still here in the heart of UK eventing country, carving out a place and a business for herself literally on Badminton’s doorstep. During this time she and Ringwood Magister, fondly known as Finn, have represented the USA at the London Olympics,  racked up an impressive array of results on the international stage including 20th place at Badminton and 10th place at Aachen this year, and are beginning to chart their course towards the 2014 WEG in Normandy next summer.

“Next year everything is aimed at Normandy, and so obviously we’re working backwards from that to how we have the best prepared, soundest, most ready horse.  Badminton is the most obvious choice because it’s just up the road and he went so well there this year. Secretly I would love to go back and conquer Rolex because he led the dressage there before we fell late on the cross country course and now he’s so much more mature, I’m so much more mature and personally it feels like something I have to avenge. Also, I think it would be so good to go home and show our face at home. Kentucky is turning out to be such an amazing event, and certainly not soft as people in the past may have considered it, so I think a really positive run around there would have us very ready for WEG.

“It seems ridiculous to go all the way back to America when Badminton is only ten minutes up the road but it’s a secret little mission in the back of my mind. I don’t know, and I haven’t even decided if that’s the best prep for him to go through all that traveling and quarantine and everything, not to mention the expense; it’s probably just a hare-brained idea but it’s a consideration.  Plus, David (O’Connor) had mentioned possibly not even doing a CCI in the Spring, possibly going to Fontainebleu and there’s a couple of really mega three star CICOs that, again, if you went well around those you would probably feel ready to go to Normandy.

“It’s just trying to take your best guess about how things are going to play out because you want yourself in the best place at the right time; when the selectors come down to it you want to have a sound horse and you want them to have the right last impression of what you’ve done so that they pick you, and then once they pick you then you want to be ready to actually go and go well, so sometimes just playing it right to get picked isn’t the whole story.”