Three hours into trying to load our rescue mare into the trailer I had just about given up. We were trying to leave for her very first horse trials in our brand new trailer, and she was not having any of it. I had gotten her to the point where she would hop right into our old trailer, but since she did not approve of the upgrade, she was not about to get in. I thought she would love the new well-lit, spacious trailer with a super wide opening and high ceiling. I thought WRONG.

We tried everything to get Hummingbird’s Medacium (Dacey) into the trailer. Treats, a group of helpers, quietly trying to load her myself. There were tears and missing parts of fingers. She is so strong and would drag me away from the trailer like a rag doll and there was nothing I could do. After three hours of this, my husband and stepson had given up and went inside the house. We decided we would just have to scratch if she didn’t get in within the next 30 minutes. But I couldn’t let her win. Also, I had been looking forward to this moment for nine months since the day we adopted her as a future eventer — I just HAD to take to her to the show. 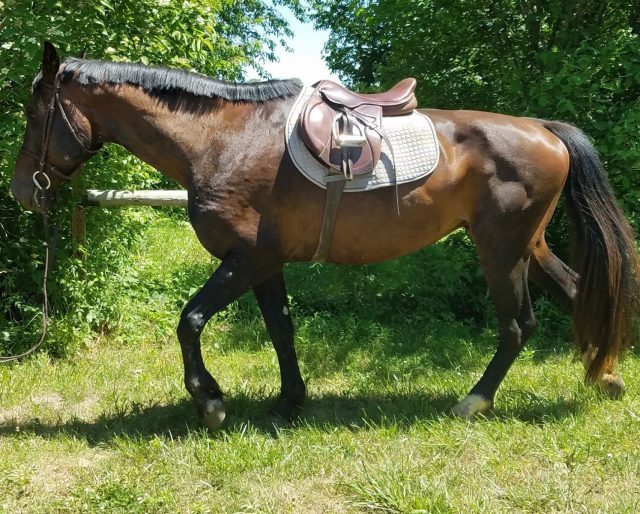 When she came in to our farm Hummingbird Stables in June of 2017, she could barely lead. She wouldn’t pick up her feet. She didn’t crosstie.  She wasn’t broke to ride. She was lacking any type of muscle and would hide in the corner of her stall when I would try to pet her. She’s perfect. She’ll be a great eventer. My husband and I both agreed and adopted her less than a month later. She was a foster fail. 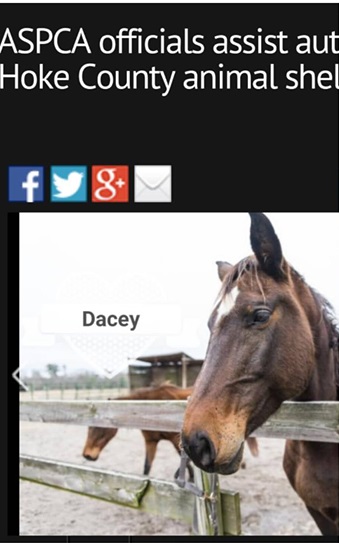 Between sobs, I whispered to the stubborn mule of a warmblood that she would be getting in this trailer whether we go to the show or not. “We’ll stay home,” I reasoned with Dacey. “I’ll scratch and let them have my two entries as a donation to the sport. But your next meal will be in this trailer. So, Dacey, figure it out.”

As if all of sudden she understood, or the fact that it was just us, or perhaps the hysterical weeping coming from her otherwise semi-normal human, she put her front two feet in the trailer. “GOOD GIRRRRRRRLLLLL!!!!!” I exclaimed between sputters. I was trying not to get overly excited but at this point I was hopeful. A minute and a half later she was in the trailer without complaint. We were both sweaty and exhausted and I started screaming with joy, “SHE’S IN!!!! LET’S GO WE CAN GO SHE’S INNNNNNNNNN!!”

From the back pasture up sprints one of my students, out of breath and looking panicked. She heard the screaming and commotion and thought I was hurt. “No she’s in the trailer! Woooooo!” I shouted with a grin.

My husband was not nearly as joyful as due to the late start we did not arrive to the Kentucky Horse Park Until 1 a.m. and to our campsite until 2. Back awake at 6 a.m. to prep for the day, he assured me that he would be getting a nap that afternoon. I smiled and nodded but knew that would not be the case.

Warm-up went surprisingly well at Spring Bay Horse Trials as this unflappable mare took everything in stride.  Her stubborn, strong personality was good for something as it turns out. She was not concerned with the atmosphere at the Kentucky Horse Park. She was not worried about the tractors or wash stalls or banners flapping in the breeze. I was starting to relax as I believed the worst must be over. We made it here and it seems like she is going to do great! That was until I went to walk the cross country course.

My student and I walked all over the Kentucky Horse Park admiring the course that was already set for the Land Rover Kentucky Three-Day Event later this month. We were looking all around wondering where they would have tucked the courses for our event. Finally we stopped and asked another competitor. “Oh! The course is at Masterson Station Park! That’s down the road 15 minutes!” she exclaimed. “You have to trailer over on Sunday. It’s beautiful. You’ll love it.”

My heart sank. “WHAT?!!” we both exclaimed in unison. How could we have missed that detail on the entry? We are both professionals, yet somehow skipped over that all important detail that the cross country course was off site. How in the world would I get this fussy mare back in the trailer to be on time for her round? She definitely won’t tie to the trailer. What will I do with her during my other horse’s round? I guess we’ll take it one step at a time.

I figured I would do my dressage and show jumping the next day and give it a whirl Sunday morning. We would start loading super early so she could have plenty of time to figure it out. And if I couldn’t get her in the trailer I would just leave her in her stall until after my Training level round with my other horse Hummingbird’s River. This we’ll figure it out attitude was new for me and rather cathartic. There was nothing I could do to change what had to be done, so I was strangely calm going in to a difficult weekend.

Dressage was everything I could ask for in a super green horse, especially after a 30 degree temperature drop over night and a inch of snow! She took everything in stride and did all of the movements I had asked. She even trotted, suspiciously, but correctly, in the corner of the arena, after a terrifying puddle had formed when sun peaked out to melt the snow. Oddly enough the crazy weather turned out to be a blessing in disguise, as thanks to the purchase of a new trailer and my attempt at being a good competitor, I had forgotten my hunt coat in the laundry room at home! But they had made the announcement at the beginning of the day that winter coats would suffice. I was strangely thankful for the snow at that moment as it was going to get rather complicated borrowing my student’s coat for every phase.

Show jumping was fantastic as she only dropped one rail! Although she was not a fan of waiting her turn, and standing quietly by the in-gate was not an option. I apologized to the other wide-eyed competitors as we circled 27,000 times before our number was called, and you could hear the faint growl of an impatient mare as if she was saying, I know we need to jump the things, so let’s do this already so I can go eat. We had to get a running start to get IN the ring, but once she was going her jumps looked picture perfect. 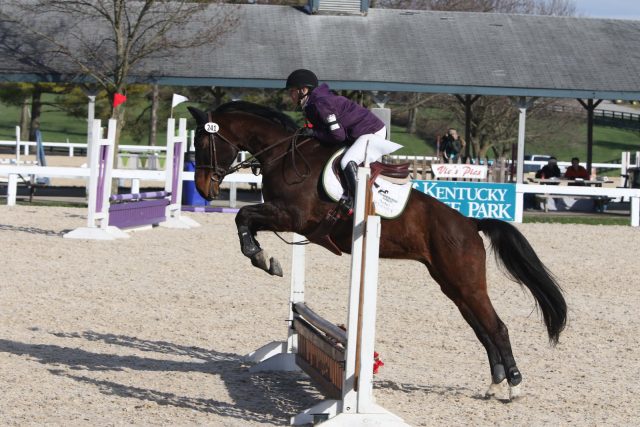 Sunday morning came sooner than I expected and it was time to load her in the trailer. My Training level run with Hummingbird’s River at 12:30 p.m., and Hummingbird’s Mendacium was at 2:30 p.m.  So we started loading at 9 a.m.

Thirty seconds later she was in the trailer happily munching her hay. We were going to be so early. She would have to stand (quietly??) in the trailer for several hours as she doesn’t yet tie. “I hate you so much,” I whispered, with a loving grin. And we were off to cross country three hours early. 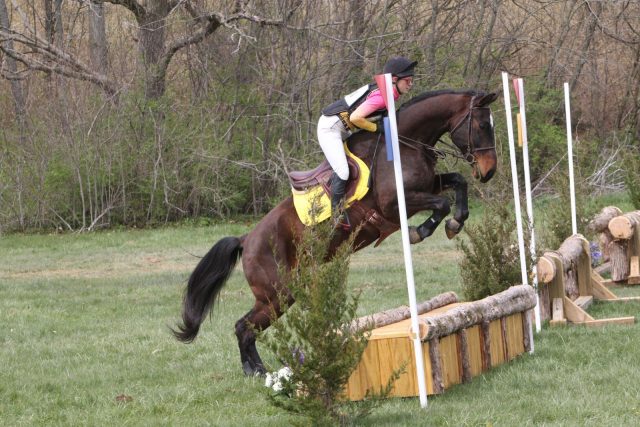 Cross country was by far my favorite part of the event. The random competitor was right. We would love Masterson Station Park. I recognized many of the questions from previous events at the Kentucky Horse Park, as likely they brought those jumps over for Spring Bay Horse Trials. This formerly ribby, antisocial mare was brave and listening, and just a pleasure to ride. She brought me to the fences. She cantered off quietly after each question and was double clear by the time we reached the finish line.  She had finished in 10th place on paper, but 1st in our hearts. 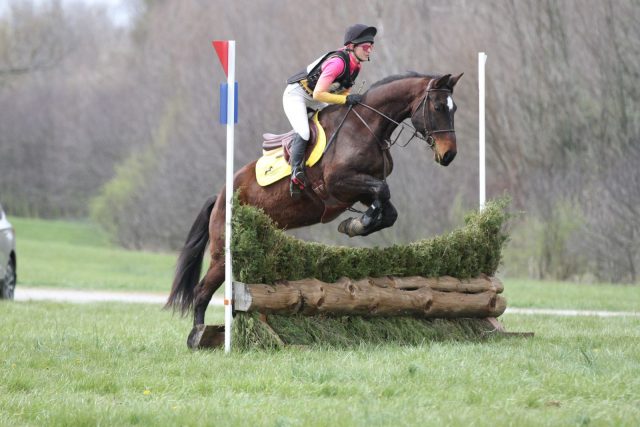 When we adopted her as an unbroke 7-year-old from Crosswinds Equine Rescue, we renamed her Hummingbird’s Mendacium. Mendacium is a lie, or a falsehood. Because we believed what we saw on the surface was not the truth. Under there somewhere was an athlete. A sweetheart. A horse that wanted attention and one that wanted a job. By the time we made it to the Kentucky Horse Park nine months after adopting her … we had found all that and so much more.