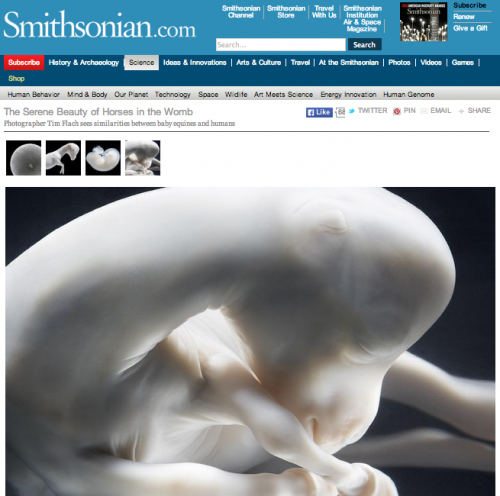 Friend of EN Fran Jurga shared a fascinating Smithsonian.com story on her Scoop.it page today. Aptly titled “The Supreme Beauty of Horses in the Womb,” the story features images by photographer Tim Flach of a Thoroughbred embryo in the first three months of gestation. The first photo was taken at 10 days told when the teeny little Thoroughbred embryo was in transit between mares. The other photos show the Thoroughbred at 30 days, 65 days and 85 days — when the baby is starting to look distinctly horse-like. SO cool!

“Early humans went into caves and rendered pictures of horses,” says Tim Flach. “It’s an animal that is partnered with us.” Flach, a 55-year-old photographer in London, explores that relationship without including human beings in the pictures. Instead, he has suggested the interspecies bond through stylized portraits of horses wearing medieval armor or racing colors.

Flach’s most intimate treatment of the subject—his documentation of the gestation of a horse—even reveals a biological resemblance. In its earliest, undifferentiated days, the milky white form might appear to be that of either human or equine. But by day 85 the graceful, 5.5-inch-long figure—suspended in formalin and photographed through a glass container—is undeniably a horse. “I hope it inspires a sense of awe,” Flach says. “You’re seeing something in its design stages.”

This 10-day-old thoroughbred embryo was in transit between mares at the Equine Fertility Unit in Newmarket, United Kingdom. Flach had a matter of minutes to spend with a petri dish in order to capture this image.