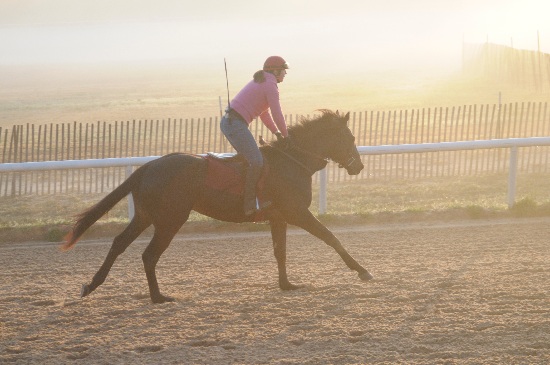 The Bloodhorse.com is opening itself up to new stories– a new section titled Racing Voices is dedicated to storytelling in the words of horse racing’s active figures—breeders, owners, trainers, jockeys, bloodstock agents, and more.  The series began on Friday with an essay from Florida Thoroughbred breeder Bill Killeen about one of his promising two-year-olds, “Puck.”

After working an eighth of a mile on two occasions 10 days apart, Puck went his first quarter-mile in :26 seconds flat, exactly what Barry wanted. He looked to be doing it easily, which you would certainly hope since that should be well within the capacity of anyone pretending to be a racehorse. His gallop out (slowing down) time was :38 1/5, about what one would expect. We thought his work 10 days later would be as much as a second faster, a very good time at Eisaman Equine.
On work day, we were surprised to see Puck out by himself. He would go solo, an experiment which could go one of two ways: He could fly off unrestricted by a slower horse or, as happens most of the time, run slower due to the lack of competition. Barry feels it’s important, however, not to let his charges get the idea that they are always supposed to arrive at the finish together. If this didn’t work out, well, there’s always next week.
We could tell Puck was moving pretty fast when he hit the starting pole. He runs evenly and determinedly, with a longer and smoother stride than you might expect from a horse his size, not particularly long or large. I thought he might have shaded 25 seconds when he hit the wire, but it’s difficult to tell when you’re looking straight down the track; the angle is poor.
Barry looked at his watch. He looked at it again. Then, he called me over.

How fast did Puck go?  Faster than anyone expected.  But Bill tempers big dreams and expectations, knowing that one fast work does not a racehorse make; like all equine athletes, there are many hurdles to overcome to make it to the top.

There have been so many promising failures that the phrase “Fastest Horse in the World” is more often delivered with sarcasm than with a straight face. Horses that have had spectacular works in sales and sold for millions often have not delivered on the racetrack. Why? Tons of reasons, the main being injuries. You’ve got a large body bouncing along up there on pretty spindly legs. The wear and tear of racing erodes talent over time, in most cases. Some horses just don’t have the mental strength to perform. It’s pretty intimidating to break from a starting gate, bells blaring, jockeys hollering, horses knocking you left and right, and perform the task.

At the end of the essay, Bill provided an update to Puck’s story.  After winning his first race, Puck faced a few niggling injuries that kept him out of the starting gate. However, he’s on the comeback trail this spring and looks forward to another start at Gulfstream Park soon.  Bill finishes with a great quote that I think all horse owners would appreciate: “F. Scott Fitzgerald famously told us there are no second acts in American lives. Hopefully he wasn’t talking about horses.”
Read full story.