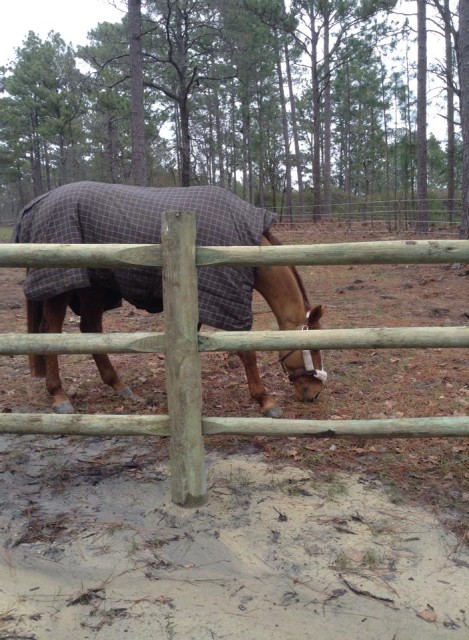 Vinnie's first day in so. pines...looking for a good spot to roll!

Hallelujah, I have arrived in Southern Pines and I could not be more ecstatic considering what I left at home. In the wee hours on Monday morning, two trailers, three ladies, one dog, and four geldings made the trek from Hartland, VT to Southern Pines, North Carolina. 5 a.m. was our departure time, and considering I barely slept a wink the night before the trip felt especially draining, though completely worth it.

I tried to sleep the night before our drive, but I felt like a bright eyed and eager child anxiously waiting for Christmas morning. My mind was buzzing a million times per second. The morning came quickly, and it looked like a winter wonderland behind those big barn doors.

Huge snowflakes gently falling from the sky. Ardent horses waiting in their stalls looking slightly suspicious after their early wake up call, with no breakfast and shipping boots being put on. They knew something was up!

We managed to get everything loaded and packed. Of course, the real anticipation was whether or not we would actually get the mammoth trailers out of the driveway and navigate our way from the back narrow dirt roads to I-91! Carefully and strategically, we inched our way to the interstate all calm, cool and collected. Once we hit the main roads, the weather no longer became an obstacle.

Fast forward about sixteen hours and we reached our destination, at least that’s what the Garmin told us! Even though it was late at night, feeling the warm air, and feeling actual dirt under my feet felt like heaven.

We unloaded the horses and decided to put mister Steady Eddie, i.e. Vinnie, out in the paddock as we figured he was the least likely to do anything dramatic. Whoops, big mistake. Vinnie went from zero to sixty in less than one second. Like a bat out of hell. He takes off and I’m thinking the worst. Crap, there go his shoes, and I’m sure he’ll escape somehow and DAMN IT why did we put him outside. 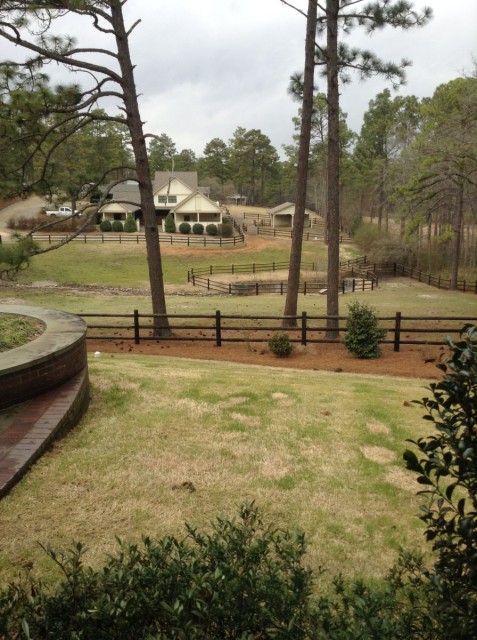 I went walking around the dark and completely unfamiliar pasture searching for a big white face, but couldn’t see anything. I thought to myself that he either got tired of running, or he’d jumped out. Finally, I located the big friendly chestnut and we returned to his stall.

The rest of the night was a bit foggy, as I was running on empty and forgot which driveway I was staying at. I accidentally pulled into three different driveways before realizing where I was and where I was meant to be. I felt like a zombie for about a day and a half.

I’ve taken Vinnie out for two hacks since I’ve been down here. I don’t know how anyone could ever take this life for granted. To be able to go outside on a nice day and take your horses for a trail ride, or do some flatwork or jumping is beyond nice.

Going from the ice kingdom to this amazingness has been almost like a culture shock. Not to mention everyone down south seems especially cherry and bubbly. And why shouldn’t they be? They rarely get snow and the birds are singing outside their bedroom windows. They don’t have to put nine hundred layers on just to go out and start the car.

It always amazes me how friendly everyone is down here, even at the grocery stores and even gas stations. So not the despondent New England attitude.

For now, I am beyond content and am looking forward to my first jump school, more conditioning rides, and preparing for the Carolina International CIC and H.T.! That’s all for now. Stay tuned!