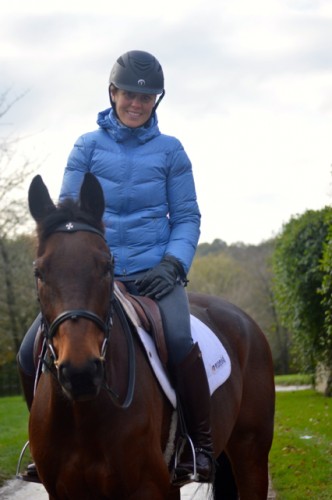 Samantha Clark has another great interview up on the PRO blog, this time with Canadian Rebecca Howard, who has been based at Tim Price and Jonelle Richards’ yard in Wiltshire, England, since the 2012 London Olympic Games. Rebecca is just starting to put her four-star partner Riddle Master back into work in preparation for the 2014 season and the World Equestrian Games, and she also has an exciting 4-year-old she’s working with now. Many thanks to Samantha and PRO for allowing us to run part of the story here. Go Rebecca!

From the PRO blog:

Mere Farm is tucked away among the Marlborough hills in Wiltshire, accessible by a long, uphill lane, perfect for hacking and getting event horses fit, and this is where Canadian Olympian Rebecca Howard has been based for the past year. Traditionally November is an event rider’s quiet time of year but the yard is bustling with activity and there doesn’t seem to be a spare stall going.  Rebecca tells me she is only (!) riding four horses a day currently, but that will increase to five or six of her own, and an equal number for Tim Price and Jonelle Richards, who she works for and is based with, by January or February.

Riddle Master, or Rupert as he’s known in the barn, started hacking at the beginning of the month after a holiday at Manton following his 12th place finish at Burghley (to add to his 12th place finish at Badminton in the Spring), “That’s what so nice with events like Burghley when you’re done in September and then they can have an early vacation. I hate feeling in a hurry bringing them back. I like to take my time hacking and making sure that they’re built up slowly and correctly, and then he’ll have a good chunk of training time in January and February, which are such good months to do it because you’re not all over the countryside competing so I’d like to maximise that.

“He goes out for between forty minutes and an hour at the moment, mostly walking and a bit of trotting. I never walk my horses on the bit, always on a long rein at the walk unless he’s being silly which can happen as well! Trotting I’ll alternate between letting him trot free, and going long and low up some of the hills. Hacking is a fun time. I build it up gradually but not to the extent of being so mathematical and counting the minutes; he’s been out and he’s an active horse in the paddock, he’s not silly but he moves around, it’s not like he’s been on box rest which I think when you’re bringing them back from that it’s very different, you have to be much more systematic.

“He’ll start flatwork again next week and he’ll do a couple of weeks schooling and then I’ll just start popping him over some fences. It won’t be anything big or strenuous until closer to the end of the month or even January but he’ll start just training over poles and working on the rideability, stuff with a fence in there. It’s also just to mix it up a little, it’s a long winter in the indoor so we’ll do some schooling and flatwork with poles involved.”

Click here to read the full story on the PRO blog.