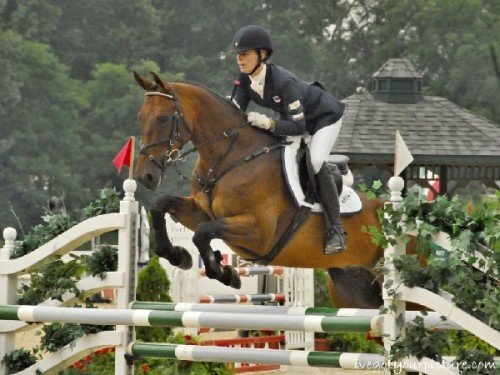 In a scientific finding that seems rather intuitive, researchers from the University of Guelph conducted a study to examine a potential link between horses’ ear position and their success over jumps.  From TheHorse.com:

Katrina Merkies, PhD, associate professor at the University of Guelph in Ontario, Canada, and colleagues hypothesized that “a horse with his ears directed forward has his attention focused on the obstacle and, thus, has a better chance of clearing the obstacle successfully.” She presented the preliminary results of their study during a poster session at the 9th Annual International Society for Equitation Science, held July 18-20 at the University of Delaware, in Newark.

Those of us around horses all the time use our horses’ ears as indicators of their feelings and attention.  A horse with ears pricked is alert and interested in something.  Perhaps he is excited or fearful about it.  A horse with both ears flicked back is often conflicted, in pain, or upset.  Mixed ears, one forward, one back, is usually a sign of a horse trying to process multiple stimuli, such as listening to a rider on his back while paying attention to where he’s going.   If you’ve ridden a horse over jumps– or watched a few helmet cams– I’m sure you’ve noticed the horse’s ears pointed forward like antennae searching for the next obstacle.

Researchers in the study observed video of 17 horses attempting a Grand Prix show jump course and noted each horse’s ear position on approach, in the air, and on landing.  From the study:

To most of us riders, this should make sense: a horse with its ears forward is more likely to jump well, than a horse that lands with its ears back. Coming into a fence, the horse’s attention may be split between the rider’s commands and focus on the jump.  However, at the fence and in the air, the rider should allow the horse to focus fully on the jump; distracting the horse (with intentional or unintentional aids, such as excess rein pressure or leg) could cause a lapse in concentration and result in a rail.  Also, a poor approach with lack of balance or bad distance could result in a rail regardless, and if the rider is trying hard to fix it, those motions could logically result in the horse’s ears listening to the rider rather than pricked forward in the air over the fence.  An eager horse interested in the jumps has his ears pricked most of the time and tends to jump cleanly.

While it’s neat that universities are performing studies on equine behavior– and sport horses, at that– this subject seems a little excessive.  I don’t think you’d find any riders disagreeing with the findings…and I think most would intuitively predict the correct hypothesis anyway.

[Read the full article from TheHorse.com]