The point-to-point originated as a cross-country race with designated start and finish points with the route up to the individual riders, requiring knowledge of the land as well as a game hunter to jump whatever lay in his path. The modern point-to-point has morphed into a regulated form of hunt racing, with set courses, lengths and numbers of fences, but a few pure, original condition point-to-point races are still run around the world. In the United States, the longest-running of these is hosted by the Genesee Valley Hunt, this year on November 5. Reader Carrie Wehle participated and shares her story here. 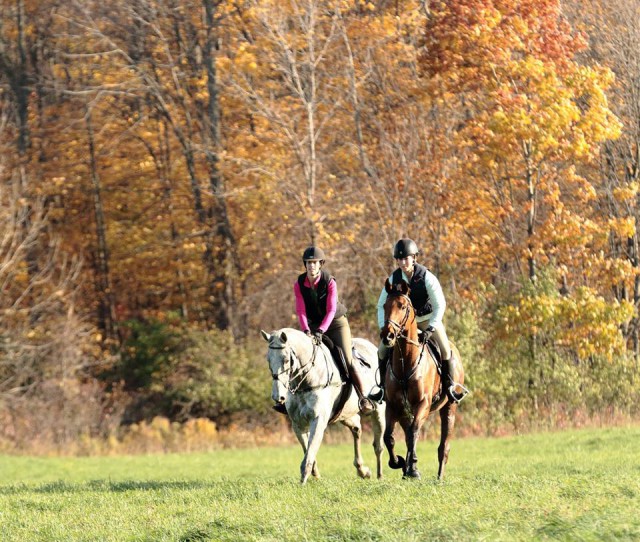 As described by the Genesee Valley Hunt:

The Genesee Valley Hunt Point to Point was first run in 1885, taking place in the hunt country of Livingston County, south of Rochester in western New York. It has developed into the oldest continuously run point-to-point in the country and has remained an old fashioned, go-as-you-please cross country steeplechase for 131 years.

My noon instructions on the day of the point-to-point:

Riders and spectators shall assemble at Leg Up Stables at 2:45 pm. Riders up at 2:55 pm.

This is all the information I get. I know I need a fit horse. I know I need my cross country vest. I know if I want to win, I have to follow the huntsman (hunts-woman in this case). It is not my intention to try to win this year.

I have partnered with a student and friend Mackenzie Williams. I am relying on her to know where to go: she has hunted this territory since she was four years old and she knows it much better than I do. We discuss our strategy — we are going to go “slow” which means a gallop but not maximum speed. Our goal is to complete, not to win.

I have won, once. The only way a mere mortal can win is to follow one of the “Valley lifers” like Marion Thorne (GVH hunts(wo)man extraordinaire) and over-take her at the finish. Not very sportsmanlike, but it’s been done many, many times. She grew up hunting this land: there’s not an inch of this valley she doesn’t know.

I pull into Leg Up Stables at 2:30 and I am the first one there. My husband Justin is with me: I need a driver to move my rig to the finish line. Since I have no clue where that is yet, I cannot plan ahead. Cars with spectators and trailers assemble quickly. There are ten of us that will start, eight that will ultimately finish. (I am never sure why people come to watch. There’s not much to see when we start. It is usually pretty chaotic when we all take off at full speed.)

We assemble and are asked to follow a fire/rescue pickup truck across Route 39. There’s an ambulance and fire/rescue standing by, as usual. Traffic is stopped; we cross the road and quickly are out of sight of the large group of spectators. We are taken to the Stonehouse Lot, 50 yards south of the old livestock barn site. 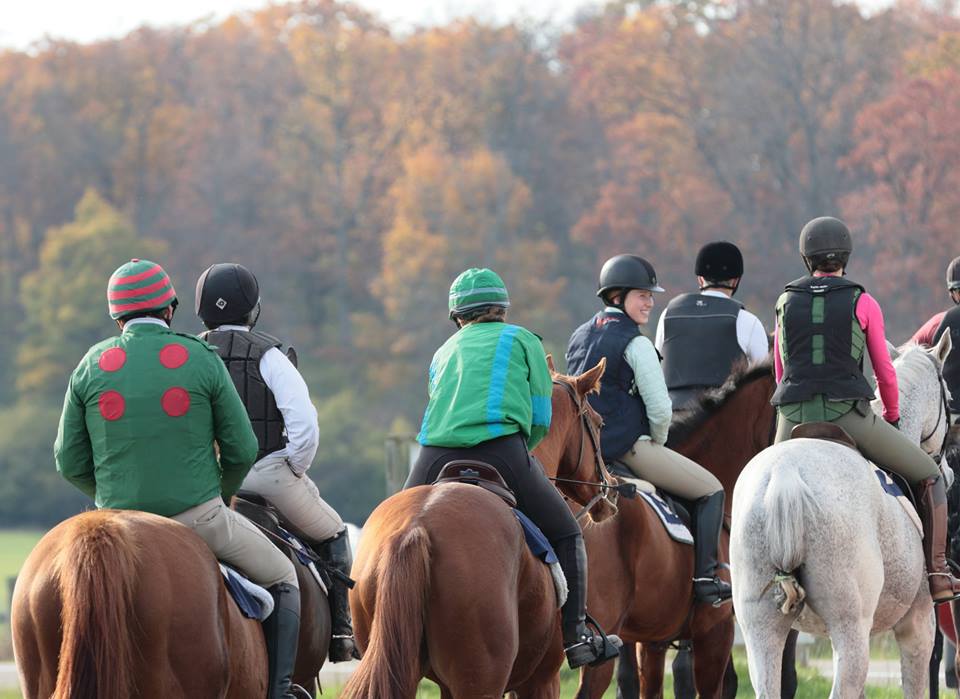 Heading to the start. Photo by Paul Rehbock.

Participants were welcomed by W. Austin Wadsworth, Master of Foxhounds. The three “rookies” were recognized. Martha C. Wadsworth reads us the ground rules:

Specific Ground Rules for this Race:

Everyone takes off and heads west. This is not typical; usually we scatter in every direction. It does not matter how you get to the check points and the finish as long as you are the fastest. The riders trying to win are quickly out in front and within less than one minute, completely out of sight.

Mackenzie has a plan: we are with five other riders who are also looking to complete, not win. Out of the seven of us, three know the territory pretty well. We are basically traveling in a pack now, discussing strategy. The lead rider in our pack does not see the American wire in the fence line ahead of her, neither does her horse.

It wasn’t pretty. The horse was okay, standing next to her with no bridle on. The rider was on the ground and didn’t move for what seems like an eternity (probably about three seconds). She finally rolls over, says she’s fine and tells us to keep going without her. We leave her race partner to supervise and continue at her request.

Five of us get through the first check point at roughly the same time with a slight deviation in routes and head for check point #2.

We are still mostly in a cluster when we run through the second check point. Mackenzie and I give our horses a little trot break at this point. They have been galloping for 12 minutes straight jumping coops, ditches and whatever was in our way. This tiny break allows the other three to disappear quickly into the distance.

Now it is just Mackenzie and me. She knows exactly where we are going. She is frustrated because she knew a shorter way to get to check point #2 but didn’t take it; we followed the group instead. I tell her it doesn’t matter: if you don’t win, it doesn’t make any difference where you finish as long as you finish.

We finished. I am not exactly sure how long it took us, probably about 26 minutes. The winning time was 19 minutes and 23 seconds over 6.25 miles — roughly 523 MPM for all of you eventers out there. Faster than your average Preliminary horse trials for roughly four times as long!

The point-to-point is a pretty wild experience. We are so lucky to have this 131 year old tradition continue in the Genesee Valley. 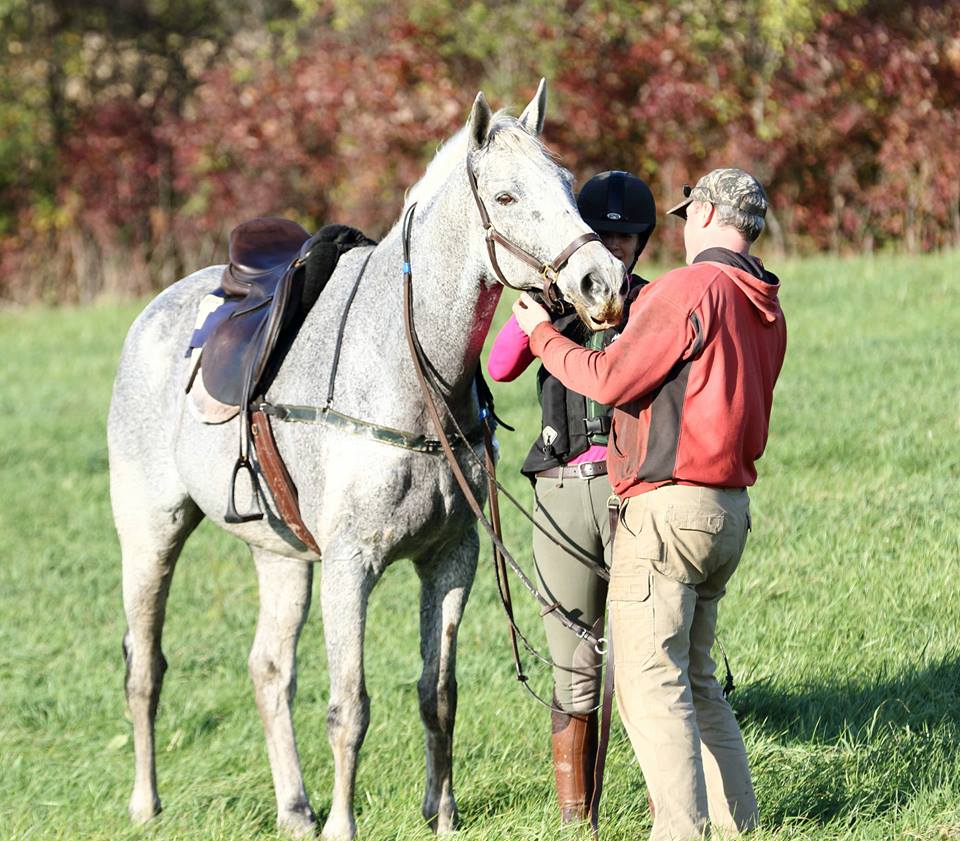 For more information about the Genesee Valley Hunt and its full calendar of activities, visit the website.

Carrie Wehle and her husband Justin Andre own Wehle Farms, a 400 acre boarding/training/rehab facility in Scottsville, NY where she grew up. Carrie specializes in eventing while also participating in FEI dressage, combined driving, fox hunting and others. She has her colors with the Genesee Valley Hunt and was a whipper in for the Hopper Hills Hunt.