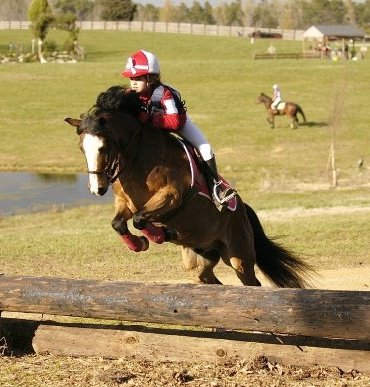 Gabby and her first pony, Gigs. How cute are they??

After the Olympics, a lot of discussion started over the future of High Performance Eventing.  One of the biggest ideas that I have seen tossed around in the forums is the addition of a better program for young riders.  Trying to get riders into a program at an early age is one of the ideas, as well as sending young riders overseas to learn the ropes.  A few months ago, I did an article about Jules Ennis taking the big step in going across the pond.  This article is about another up and coming young rider, Gabby Dickerson, who has been a working student since a young age.  Photos used with permission. 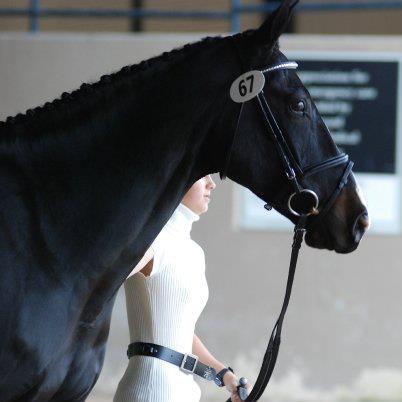 Gabby Dickerson has been riding since the age of 7 and took two lessons per week where she grew up in the Outer Banks of NC.  She started eventing on a very educational (and adorable!) pony.  In 2007, she bought a new horse from Jodi Hemry and ended up riding him with Kim Severson in a clinic.  Kim was immediately impressed with this young girl that could ride a difficult horse so well.  Gabby’s parents started driving her up to Virginia to ride with Kim, and eventually, in the summer of 2008, Kim asked Gabby (then, age 12) to come to Virginia to be a working student.  Gabby has been working for Kim since then, and she has learned a lot.  When asked about her experience with riding and working for Kim Severson, Gabby said,

“Kim expects you to give your best effort, to get the best out of the horse, and to push for excellence at all times, while always putting the horse’s well being first.  It was a great time for me to transition from learning the basics, to focusing on the details, as well as the constant training of the horses.” 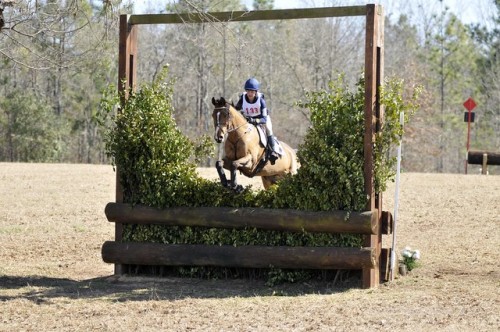 In 2011, Gabby’s parents made the move from the Outer Banks to Charlottesville, VA.  They were leasing a farm with a 10 stall barn.  Kim decided to move her operation there and has been working out of their barn ever since.  Currently, Kim is working on setting up her own farm, and she will continue to work out of Gabby’s farm until that happens.  Unfortunately, the farm has been sold, so Gabby’s family will be relocating, but Gabby will continue to work for Kim.

Gabby has had a few different horses during her time with Kim.  One of her most memorable moments in eventing was with Folie a Deux, a lovely warmblood gelding.  They competed in the 2009 MidSouth Training Level Three-Day and won!  Gabby thinks that the experience was something that really shaped how she looked at competing.  Kim had her treat the show like a big three day, and it really taught her a lot about the sport.  Unfortunately, Folie was not the horse for Gabby to move up the levels. 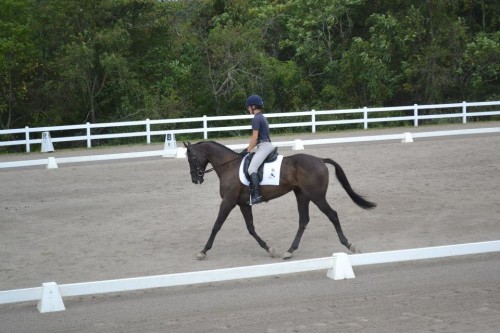 As Gabby has figured out, there are no guarantees with horses.  Her two latest upper level prospects did not work out.  Blue Suede Shoes had to be retired from competition after a career ending injury, and Hang Time did not really want to be an upper level horse.  He was recently sold as a lovely low level event horse.  However, she has three nice, new TB projects that she is really excited about.  The oldest, Let’s Go Yankees, will be out competing this fall.  She also has another 4-year old and a 3-year old with which she is taking her time.

Gabby hopes to take all that she has learned and will learn from Kim and use it to start her own farm in the future.  She plans to go to college after high school, but she wants to continue with her riding and eventing.  When asked about her future goals:

“I have learned so much while working for Kim, and still every day there is something new or something that can be improved.  In addition to riding, the horse care, business management, and just general day-in, day-out happenings of a professional event barn have been invaluable tools to take with me when pursuing my future goals.  While planning with horses is always difficult, I would like to keep developing the young horses to reach their potential.  I would like to gain some upper level experience while finishing school before possibly heading overseas for a while to learn the tricks of the trade on the European eventing scene.”

Gabby’s maturity shines through, and I believe that whatever she sets her mind to, she will succeed!  I look forward to seeing her out and about with her new horses.