No stranger to Galway Downs, Ian Stark has redesigned the CIC3* course a bit for this weekend. Robert Kellerhouse and his crew have been watering and dragging all the tracks throughout the day, and were still going at 8 p.m. last night – only to resume this morning at 5 a.m. Temecula is known for its great weather, but that can sometimes mean hard dry ground. With temperatures expected to reach 90 or above tomorrow, many of us are wondering what happened to spring.

Heat will play a factor in how the riders choose to ride the course. With many of the CIC3* teams headed to Kentucky in a few weeks, ideally they would like to go at speed. At the same time, all the riders have expressed their commitment to listening to how their horses are feeling with the heat and the ground.

Three gallop fences before 4AB, which has a lovely hollow out over a large fence on a mound. Ian wants to see forwardness, but “It should just be a nice rhythm. I want to see the horses showing a bit of their scope and their exuberance and ‘Wow we’re on cross country and hoorah!’ – but I don’t want to see bad riding.”

The coffin complex, 6ABC, is the first real technical challenge on the CIC3* track. It comes on a long downhill gallop approach. Ian remarked that usually it is the riders that make the mistakes at this complex, not the horses. I will say that ditch is down a steep hill, and “If they do have a 20, they need to put that behind them and ride on.” I, personally, have bad coffin juju, and Galway’s complex is about sixteen times the size of my nemesis coffin at Twin. In honor of that, I won’t be standing anywhere near 6abc! 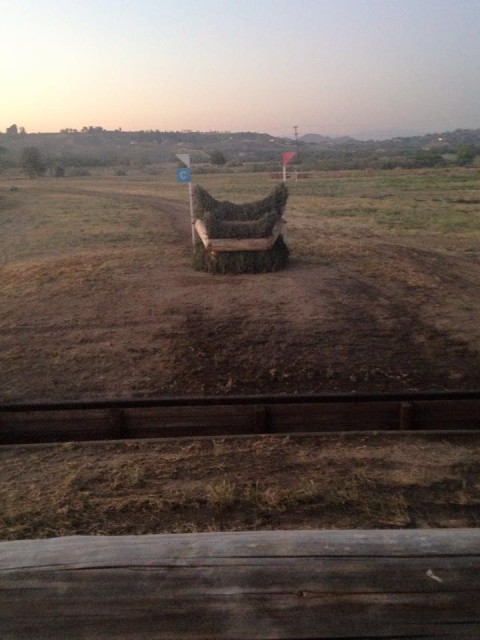 Standing at 6A, looking at B and C, – now that is a coffin!! Photo by Stephanie Nicora

At Lake Galway, the riders will face a bounce jump into the water. Ian says he chose this because it focuses on being bold without being too technically difficult. There is an option for those that choose not to do the bounce. I haven’t heard many people considering the option, or thinking the bounce is too difficult of a question. Everyone does agree, however, that it’s better to be safe than sorry.

The next technical questions is at 12AB, a large drop to a chevron. Though it’s definitely a substantial drop, it’s not quite Head of the Lake status. Ian has really taken into account how many West Coast riders are doing their final prep for Rolex here, and all the riders appreciate it.  According to Ian, “If they have a problem here, I would be hesitating about going to the Bluegrass state. It’s too late to do the training for Kentucky, so it’s keeping the confidence in the horse and rider and making sure they aren’t ring rusty.”

The CIC2* actually has the more challenging  lower water complex — they have to jump the strangely intimidating Shamu. The orca has been a fixture on course for years, and Ian has no plans to remove it any time soon. He’s not quite sure why it causes the horses to look so much — perhaps it’s plain black and white coloring — but look they do! 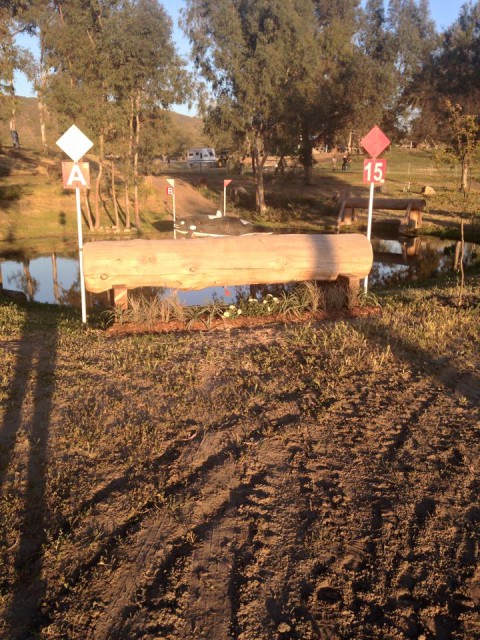 Galway Downs has a full track, with over 150 racehorses stabled here for training. Usually the infield and the track are used as the gallop stretches, but because there is so much galloping going on outside, the track is used a bit differently this time.

Instead of approaching the brush chevron down the hill from the announcer’s tower, they will actually be riding up to it, directly underneath the tower. Ian thinks it will ride well, with it coming later in the course, so the horses will be a bit more tired and the tower will help frame the chevron.

He admits some of the greener horses might take a second look — I sure did! In fact, I missed the fence on my initial coursewalk, thinking the jump had just been moved aside. Silly me! Clearly I have to start working on my course design creativity… 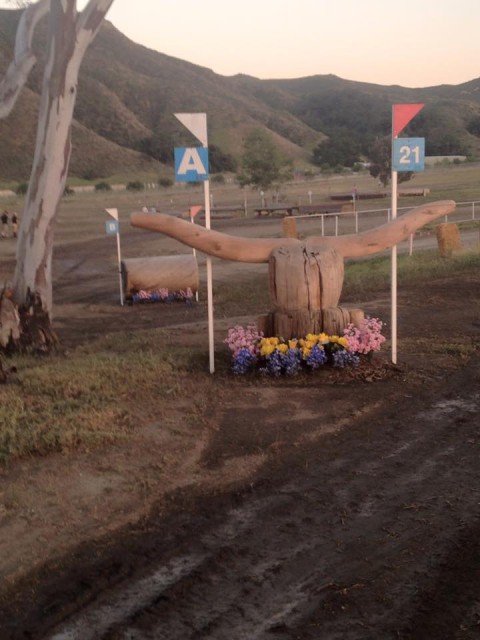 Ride a horse, save a bull. Or something like that . . . Final combination on course! Photo by Stephanie Nicora

Most of the CIC3* riders are planning to go for time. John Michael Durr, currently in second on Ruth Bley’s Esprit de la Danse, laughingly said that he’s going for time — and for a good reason! “My wife told me if I don’t go fast I won’t be able to go to Rolex!”  He said laughing. His plan is to “get out and run through the gear box, operating at a pace.”

James Alliston, our overnight leader, said that if the ground isn’t too hard, he will be pressing for pace. “With the older horses, you have to be a bit more careful,” he said, saying that foot soreness will be the only thing that could stop Tivoli from heading to the Bluegrass state. “I don’t have a billion horses at this level,” he said, so he plans run near the speed riders will need for Kentucky. “Go and get your eye and go fast because little mistakes aren’t so little at speed.”

Third place pair Matt Brown and Happenstance will see how they feel. This is Hap’s first CIC3* and it’s all about confidence building for him for the rest of the season. However, Matt won’t be holding any of his horses back, if they feel good. His goal is to increase fitness for all three of his horses, and he plans to be paying very close attention to what the horses are telling him.

Because of the CIC format, the cross country will be run in reverse order of go. This means James and Tivoli will be the last pair to take the course for the CIC3* division. Many think this adds a bit of pressure to the cross country — something the riders think will help them prepare for the pressure of both Kentucky and Jersey in the coming weeks. With the scores so close, time will really play a factor.

Stay tuned for the exciting conclusion to the FEI divisions at Galway Downs, in Temecula, California.