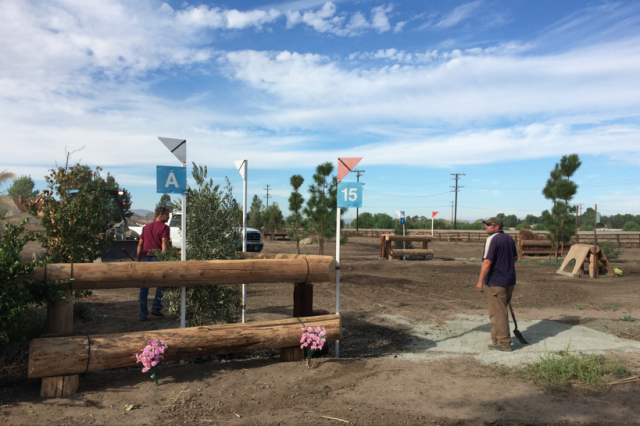 This combination will be keeping a lot of riders awake tonight.

The leaders after dressage in the CCI3* at Galway Downs all enter tomorrow with something to prove. For Boyd Martin, it’s to show once and for all that Trading Aces — a horse that made the time at Rolex this year only to call it quits at the World Equestrian Games — can push past the 7-minute marker on Ian Stark’s track.

For Buck Davidson, it’s to prove that Copper Beech’s win in the Jersey Fresh CCI3* — which he admits wasn’t the smoothest path to victory with a hairy cross-country round — wasn’t a fluke, and that this horse is indeed a serious prospect for the future.

And Maya Black will be looking to show she can deliver the consistency she’s been striving to produce all year with Doesn’t Play Fair in a season that’s featured wild swings, from top finishes at Bromont and Plantation Field to falls at Richland and Fair Hill.

Hit and miss for Trading Aces

When it comes to Trading Aces, Boyd is the first to admit the horse has been “hit and miss.” “He’s either been phenomenal or extremely disappointing, and after a disappointing WEG, we decided to try to make it a little easier on him here at Galway, with flatter ground and hopefully faster footing and smaller jumps than Normandy,” Boyd said.

Tomorrow is do or die for Oscar, and this event will mark a turning point in his career. “If he fails here, I haven’t really thought about that part, but it would be pretty disheartening,” Boyd said. “I’ve definitely brought him out here to have a crack at it, and he’s off to a good start.”

After the horse struggled at Boekelo last year, Boyd overhauled his fitness program and got Oscar sweating properly. It seemed he was back on track after winning his Advanced division at The Fork and hitting bang on the optimum time at Rolex with Phillip Dutton in the irons. At this point, Boyd doesn’t think the problems are related to his fitness.

“I don’t think we could possibly get this horse any fitter,” Boyd said.”He’s a very, very sound horse and a healthy horse. That horse has galloped, swum and jogged more than he ever has in his life. I think it’s more of a mental thing when the going gets tough, and he mentally struggles.”

Coming to Galway is part of a new strategy for Oscar, as Boyd will now carefully pick and choose where he runs the horse. “I think after the WEG, he’s unlikely to be considered for another American team without a string of consistent international performances. In a weird sort of way, the pressure is really off from that angle of it. I love the horse to bits; he has so much quality,” Boyd said.

If tomorrow goes well, Boyd said he has talked to the syndicate about targeting Aachen or Luhmühlen next year. But first he has to get around Ian’s course, which might not be as physically demanding as Fair Hill, but it still packs a punch with several questions that could be considered four-star, especially the open corners at the moat at fence 15, he said.

Galway Downs rises to the occasion

Buck Davidson will look to get Copper Beech relaxed early in the course, as he can suffer from nerves that affect his jumping rhythm on cross country. “Basically, for him it’s about getting him relaxed and getting him jumping well,” Buck said. “He is a good jumper; he is brave; he is honest. I would hope I would have a much better round than I did at Jersey.”

Having competed at the Galway Downs International CCI3* every year since it started in 2011, Buck has seen the course evolve and change quite a bit, and he said he’s been very happy to see how much the footing has evolved even since last year, when he spoke to Robert Kellerhouse and Ian Stark about making some improvements.

“Robert spends so much time and money watering the course,” Buck said. “He’s gotten three new water trucks since last year and a fancy new water system. … I think we all owe Robert a huge thank you for what he does for West Coast eventing. He puts his money and his passion into this sport, which is great for eventing in California and on the West Coast.”

As for his thoughts on the course itself, Buck, like Boyd, identified the open corners at fence 15 as a four-star question that is going to be extremely influential tomorrow. “The corners at the moat — that for me is the competition,” Buck said. “For the most part, it’s a nice course but then those — if you saw those at Kentucky, you would stay awake at night.”

And though the footing is much improved and rain is expected in the forecast tonight, Buck said you can never quite predict how the ground will factor in. “You can never underestimate the ground here; it’s so different for our (East Coast) horses” that are used to running on grass. Additionally, Buck didn’t bring a rain coat to California, so he also has that to worry about tonight.

Maya Black and Doesn’t Play Fair just edged Buck and Copper Beech for the win at Plantation Field, and now they’re poised to do battle again after she fell at Fair Hill. That mishap occurred when “Cody” jumped a brush fence on the mound at the second water complex with too much power, and Maya popped off on the landing.

“In the past, I’ve been one to go for consistency; I think that’s really important, and I feel like that hasn’t been quite what’s happening lately, so I’d like to get back to going in that direction,” Maya said. “Consistency is definitely more the direction I’ve enjoyed in the past.”

In that regard, their dressage is becoming more consistent, and Maya was pleased Cody held it together today in an atmosphere where several horses didn’t fare so well. “I felt like overall it was a cleaner test than Fair Hill a few weeks ago, but I definitely felt like there was room for improvement.”

Maya said in hindsight she should have ridden him more into the bridle in the trot work and also ride more forward in the canter work. “I was a little hesitant because of the extra changes that he’s been doing in the last few tests, so I was a little on the cautious side,” she said.

Marilyn Little, who is competing at Galway Downs for the first time, also came west after falling victim to a water complex on the CCI2* course at Fair Hill with RF West Indie, and they’ll be another combination looking for redemption tomorrow on a very different track than they’re used to.

“It will be really interesting to see what they have in store for the track tomorrow morning,” Marilyn said. “I understand there is a lot that’s going to be done tonight. I think it looks like it’s plenty of course in the two-star. The waters are well designed and well planned; there are serious questions with plenty of galloping. I think the time is going to be hard to make.”

She is also enjoying the lead in the CCI* with RF Scandalous, as well as sitting in fourth place with RF Typecast. Marilyn had hoped to compete Scandalous in the two-star at Fair Hill, but after she didn’t end up qualifying and West Indie had trouble on course, she said it became a last minute decision to bring both mares here.

“(Scandalous) has all the characteristics to be a great cross-country horse,” Marilyn said. “She’s very careful; she’s got a great gallop; she’s very brave, and she’s very smart. But she is 9, and it’s a new partnership. … So we have to make sure we take our time on that curve and not get caught up in the event by event scores, because she’s a long haul horse.”

How to keep up with cross country

With a 100 percent chance of rain in the forecast for tonight, we’re not quite sure what we’ll wake up to tomorrow here in Temecula. It rained heavily before cross country several years ago, which made for a muddy truck, though for the sake of the water truck drivers who will have to be out all night otherwise, Chinch is doing a little ran dance.