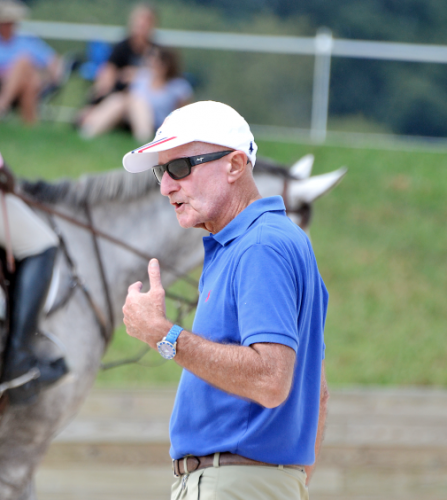 How do you summarize a day spent with a man you’ve immortalized your entire life? I’ve had a healthy fear of George Morris ever since my childhood trainer gave me a stack of old Practical Horseman magazines to sift through. I would devour each of his “Jumping Clinic” columns, but not before examining the photos myself and trying to pick out every minuscule criticism George might say about the rider’s turnout, crest release and leg position. George’s no-nonsense critique style has earned him a reputation as a prickly perfectionist, one who puts thumbtacks on saddle seats to emphasize just how serious he is about getting off the horse’s back.

I went into Tuesday’s clinic at Boyd Martin’s Windurra Farm in Cochranville, Pa., expecting to watch George tear apart our High Performance riders. But what I observed instead was a wise, patient teacher who — at 75 years old and with a laundry list of accolades to his name — has quite frankly earned the right to brandish the occasional verbal assault. While nothing slipped by his watchful eyes — a botched distance, the wrong diagonal or “gimmicky” stirrup irons — I found him to be surprisingly forgiving of mistakes. But his infamous temper certainly surfaced when riders failed to execute his clearly given instructions.

The fact of the matter remains that there is a method to George’s madness. Time after time he tweaked a rider’s position or aids and their horse responded positively. When George picked out a horse to ride from each of the three groups, the change in the horse was very apparent. Whether he schooled a horse successfully through flying lead changes, finessed a horse into accepting contact or convinced a horse that raised trot poles were nothing to fear, George patiently and precisely worked through each problem. Yes, he demands precision, but there’s a reason why George teaches the way he does. To put it simply, it works.

While I’m still working on a longer post — packed with lots of photos and videos — explaining the exact exercises George worked on with our High Performance riders, I’d be remiss if I didn’t include some of the infamous George Morrisisms that surfaced during the clinic. And, as a bonus, I am very pleased to announce that George’s ringtone is none other than Lady Gaga’s “Paparazzi.” I like your style, George. And it’s comforting to know that even The Master forgets to put his phone on silent during a lesson; there’s hope for us all yet.

When asking for a slight lengthening: “Just think it. Let the horse go forward.”

“Steady hands. You’re so busy with your hands.”

When asking for transitions: “Think under and up.”

“Straightness is a virtue.”

“There are three types of contact: seat bones, calves, hands.”

“You’ve got to read old books.”

“A stick must be used with great tact.”

To a resistant horse: “Accept my hand.”

To a horse on the forehand: “Give me your ass.”

“There’s no such thing as an impossible distance. Make it work.”

On what riders should be doing: “Watching, listening, reading.”

“In every transition, think up!”

“Your seat is important, but it doesn’t produce impulsion.” 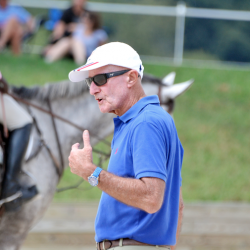 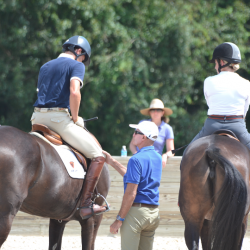 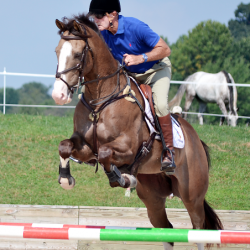 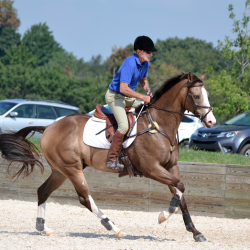 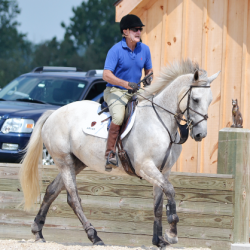 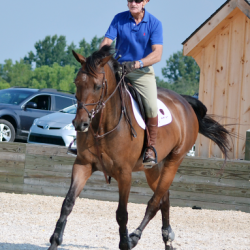 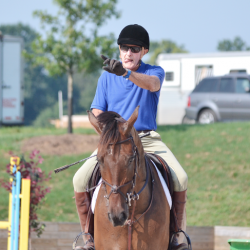 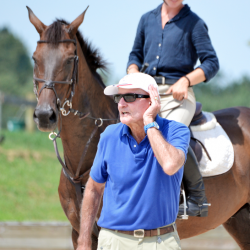 The man, the myth, the legend. Photo by Jenni Autry.