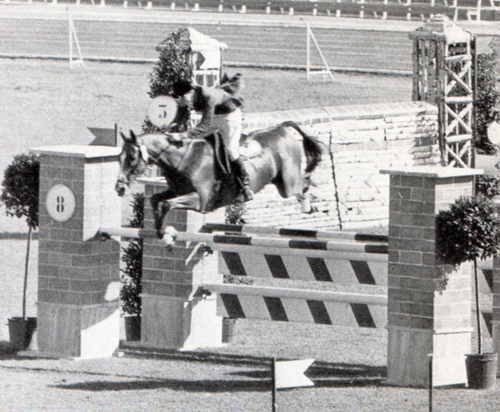 George Morris on Sinhon at the Olympics in Rome in 1960 (Photo courtesy of showjumpingnostalgia.com)

We’re now seven days into the new year, and it’s already shaping up to be a great one! Although, I don’t know about the rest of you, but I can assure you my (hastily made) New Year’s Resolutions simply aren’t going to make it. Who honestly believes that committing to a late-night resolution to improve yourself, while tipsy on champagne, is in any way a valid plan for self improvement? I don’t!

But obviously some riders were interested in serious self improvement, as the reports from the 2012 George H. Morris Horsemastership Training Sessions continue to roll in. Chronicle of the Horse posted Day 2, entitled “Building Blocks of Success,” and Day 3, “Don’t Ride Stupid,” on their website yesterday. George himself has been unwell, so Kent Farrington and McClain Ward have been filling in as instructors. We here at Eventing Nation would like to extend our “Get Well Soon” wishes to George, and hope to see articles of his return to his Training Sessions very soon!

In other Linkage news:

Tickets are now on sale for the 2012 Fidelity Blenheim Palace International Horse Trials, set for September 6 – 9, 2011

Good News, Mitsubishi Lovers! The Car Company has expanded its sponsorship of Badminton Horse Trials to 2015!

The IDHSNA/USEA Future Event Horse Committee has enacted a few changes for the 2012 season, including that the minimum qualifying score has been changed to 68%

The 2012 Internation Eventing Forum is only one month away! This year’s theme will be “Focus on Success.”

DVM Erik K. Dill discusses what you can do in a horse-related emergency situation

Paul Tapner has confirmed that Advanced Event horse Kilfinnie II was put down due to “complications.”

And since this is George Morris’s Saturday Links, I thought I’d leave you with a 2008 video that shows a little window into the George Morris Horsemastership Experience. Go Eventing!