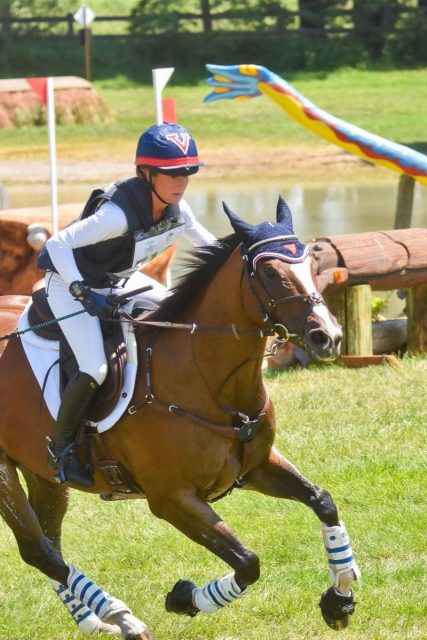 “That feeling a good Thoroughbred gives you on cross country.” Photo by JJ Jayhawk Sillman.

Still reeling from their success in the 2018 NAYC CCIJ1* at Rebecca Farm, Georgia Phillips and her OTTB Menue Rendevous (“Lundee”) reflect on their journey from track to team Young Rider gold.

Three years ago while scrolling through Facebook, a flash of chrome on an otherwise scrawny and unimpressive off-the-track mare caught Georgia’s eye. With her top event horse sidelined due to injury, the young rider from Area V was looking for a fun summer resale project. “I have to be honest … she was not very cute in person at the time,” says Georgia. But something told her to look past the thick winter coat and racing fit physique. 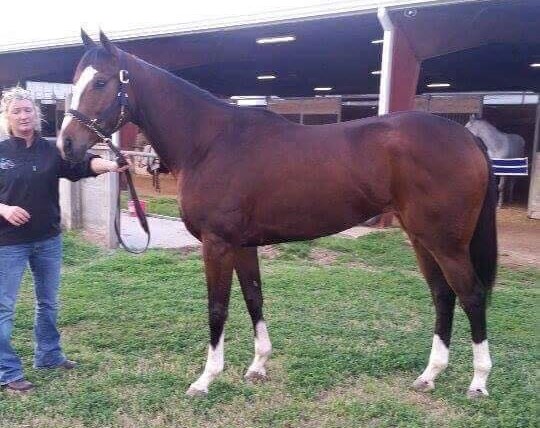 The picture that started it all. Photo courtesy of Georgia Phillips.

Georgia’s first time sitting on the mare proved her instincts right with the most uneventful ride on a 4-year-old OTTB there ever was. She and her mom shared a look and the bay mare came home with them that day. The young mare impressed everyone with her laid-back attitude and willing disposition, but not even Georgia knew back then what a once in a life time horse Lundee would turn out to be. “I never had the thought that she would be my Young Riders horse,” Georgia says, “I was hoping when my other horse got sound he would be the one.”

It wasn’t until Georgia took Lundee out cross country schooling for the first time that she began to feel that this mare could be something special. Lundee handled everything that was asked of her like a seasoned pro. “She just made me smile, she gave me this feeling that no horse ever has on cross country,” Georgia recalls. And only a month after her purchase, Lundee and Georgia were entered in their first horse trial together. 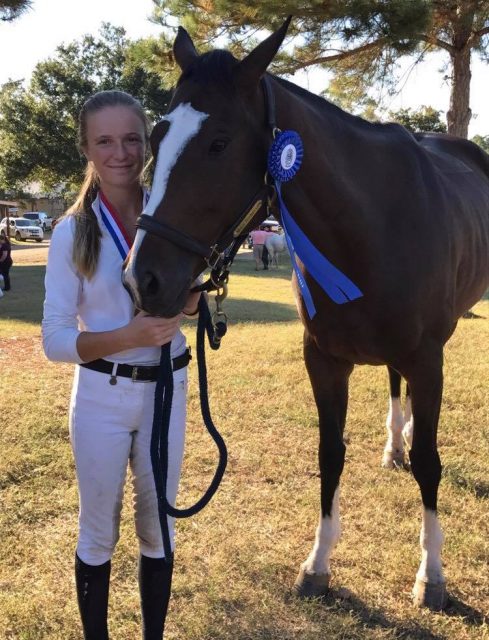 “She thought the cross country was amazing,” says Georgia, “It was the first time I experienced that feeling a good Thoroughbred gives you out on cross country.” The mare finished on her dressage score, as she would become known for in the barn, and Georgia fell even more in love with her.

When asked if she had ever come close to selling Lundee, as was her original purpose, Georgia compared the mare to a failed foster dog that turned into all her success. As the jumps got bigger the mare’s skills got better. Lundee became the queen of finishing on her dressage score. This past year the pair traveled to Florida for the winter series and made their Preliminary debut. Of course in true Lundee fashion they finished on their dressage score and that’s when Georgia knew Young Riders was in their sights. 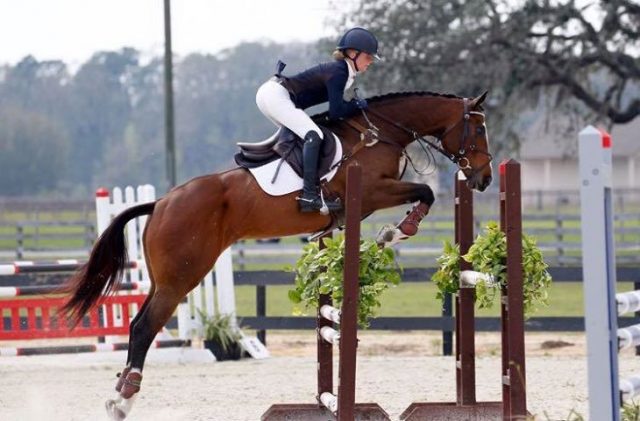 “When I started her over show jumping fences she was always so careful and so natural.” Photo by Tom Cook.

Making the Area V Young Rider team was a dream come true for Georgia. Winning team gold on a horse she produced herself? “I was just so humbled and excited to be there on a horse like Lundee with a story like ours.” Looking back Georgia is still in awe of her “Golden Girl”: “Lundee has been the light of my life and I still can’t believe she did it!” Area V competed with only three horse and rider pairs (the others being McKinsey Wickman with Dassett Profile and Georgia Dillard with Galileo Wp), meaning there was no drop score and no room for error.

“When we won I just couldn’t quit sobbing,” Georgia recalls. “I was galloping alongside two such nice horses, and the fact that Lundee helped get us that gold medal makes me speechless.” 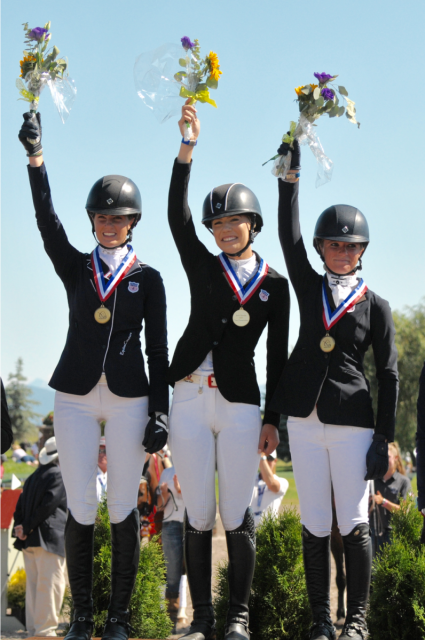 Lundee wasn’t the only special horse that helped Georgia achieve her goal of competing at NAYC. In 2012 Georgia and her mother traveled to the East coast with the aim of purchasing a more experienced horse for Georgia to move up then levels on and pursue her spot on the Young Riders team. The result was a big bay 1-star horse named Harlee. Harlee took Georgia through Training level and they looked like they were well on their way to contending for a spot on the team when tragedy struck. The beautiful horse fractured his leg in a freak pasture accident and the tough choice to put Harlee down was made. 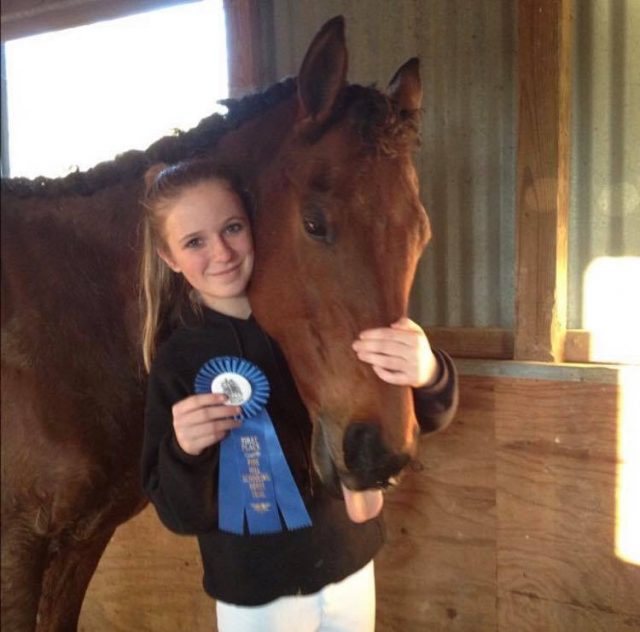 Fast forward to the 2018 NAYC and Georgia and Lundee carried a piece of Harlee with them. As many horse people do when a beloved partner passes away, Georgia saved Harlee’s shoes. They fit Lundee perfectly. “When I got Lundee and she started to show potential I thought… how amazing would it be for Lundee to wear Harlee’s shoes?” says Georgia, “Harlee holds such a special place in my heart, and for his shoes to have one last go was so neat.”

According to Georgia, Lundee and Harlee had many things in common: “A little quirky on the ground, small Thoroughbreds, such vigor for life, and so in love with their jobs.” It was the perfect fairy tale ending that Harlee got to gallop every stride with his girl and her super star mare. 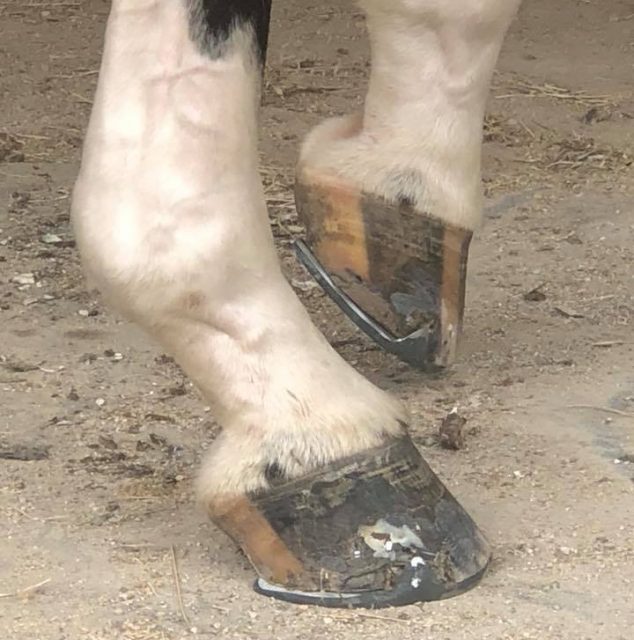 Lundee and her magic shoes. Photo courtesy of Georgia Phillips.

Growing up as a trainer’s daughter, Georgia has had the privilege to work with many different horses. Lundee’s desire to please has always made her stand above the rest. That, and her hidden talent. “Lundee did what so many people didn’t think was possible, including me,” says Georgia. “She went from this scrawny little horse to the most incredible athlete.” Georgia plans to produce more horses up the levels and represent the U.S. on future teams. “The next step for me is to find a new rider for my golden girl to teach,” says Georgia. “We’ve had such a special journey together that I will cherish forever.” 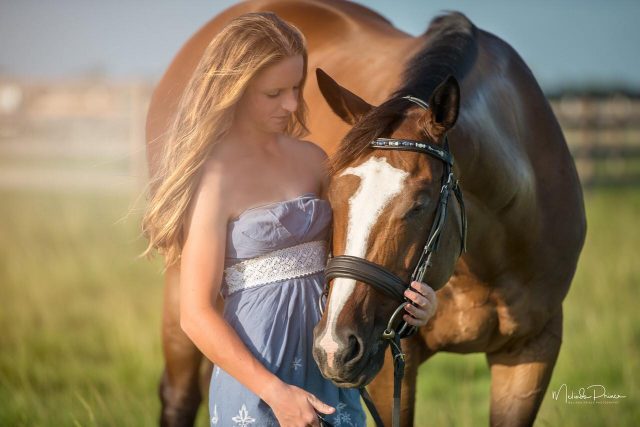