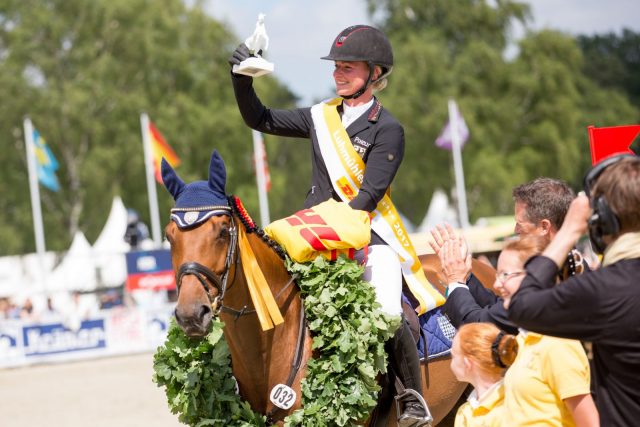 If the results of the B-sample match the positive result of the A-sample, Julia and Samourai du Thot will be disqualified from the European Championships, and the German team will be required to return their silver medal.

Samourai du Thot was tested on Aug. 20, 2017, the final day of the European Championships. The A-sample tested positive for the non-steroidal anti-inflammatory drug Firocoxib, known by the trade names Equioxx and Previcox, which is categorized as a controlled medication by the FEI.

“I and my team have no explanation about how this substance has got into my horse and believe that it was not administered by any fault of our own,” Julia said in a statement on her Facebook page.

“Nevertheless, the positive result would mean disqualification for me, and lead to the subsequent loss of the hard-won silver medal for the German team. I am devastated to be even unintentionally the cause of such a bad blow for our great team, which has fought so hard for this success! That I have no idea how, when and why this substance got into Sam’s body worries me deeply and is a big mystery to all of us.”

The National Anti-Doping Agency (NADA) also tested Samourai du Thot as part of a random control at Warendorf shortly after the horse returned home to Germany. The NADA sample also tested positive for Firocoxib, and FN said in a statement that they expect the FEI’s B-sample to also test positive.

There is no set date for the B-sample results to be released, but FN said results are expected “soon.” Once the results of the B-sample are announced, Julia will have 21 days to decide whether to pay a sanction of 1500 Swiss francs and administrative costs of 2000 Swiss francs, or explain her case before the FEI Tribunal.

FN is continuing to investigate how Samourai du Thot could have ingested Firocoxib during the European Championships.

“Two pieces of information make it now possible to limit the period when the substance must have been ingested by Sam. The first one is that a pre-probe taken on August 3 proved negative. The DOKR routinely tests all horses which are nominated to travel to international championships to compete for the German team to ensure that they are free from prohibited substances,” Julia said.

“Furthermore, there was not just a trace, but a substantial amount of Firocoxib detected. The detected level together with the relevant decomposition time suggest an administration between Friday afternoon and Saturday morning (after dressage, before cross country test). Together with the result of sample B, we will hopefully receive documents that may allow further conclusions about the exact time or amount of the ingestion.”

Julia added that she is “100 percent behind our doping prevention system and fully aware of my responsibility and due diligence in dealing with this issue.”

If Samourai du Thot’s B-sample tests positive and Germany’s silver medal is stripped, Sweden would then receive the silver medal, with Italy moving up to take the bronze medal. Click here to view the team results from the 2017 FEI European Championships.