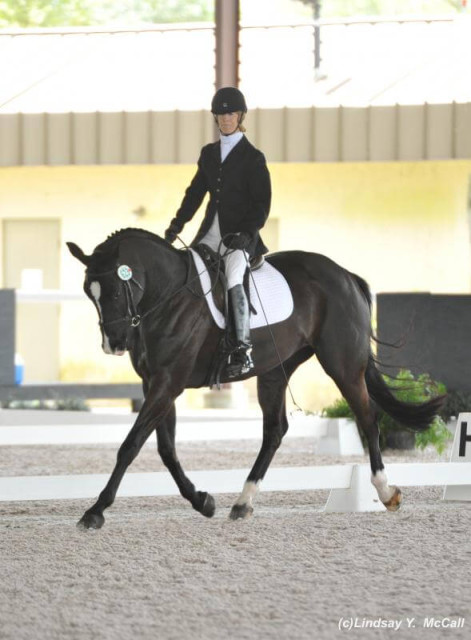 Margaret McIntosh, better known as “Gigi,” is an international para equestrian who trains out of Missy and Jessica Ransehousen’s Blue Hill Farm in Unionville, Pennsylvania, alongside numerous eventers. You might remember when EN posted a link to Fork in the Road, the documentary about her life.

Cindy Connors and Brian Troy, the producer/writer and cinematographer team that produced this short film, worked together with the cast and crew at Blue Hill Farm and Chesterland Farm to create the documentary, which has been chosen as an official selection of the 2015 Equus International Film Festival in Missoula, Montana.

While the focus of this year’s festival is on the relationship of horses to Native Americans, Janet Rose, director and founder of the festival, told Gigi, “Your story is inspiring and heartfelt! You give hope to many. We are honored to share it.” The documentary will air at the festival on Sept. 19.

The film’s inclusion in the festival brings awareness to para equestrian sports, as well as Gigi’s own journey to qualify for the 2016 Paralymic Games in Rio de Janeiro, which she hopes to do at the Global Dressage Festival CPEDI3* in January with her RPSI mare, who is appropriately named Rio Rio. Missy Ransehousen, who is based out of Ocala in the winter, will coach Gigi in Wellington, which serves as one of the qualifiers for the 2016 U.S. Paralympic team.

As a refresher on Gigi’s story, she began her formal riding career in the late ’70s as a working student for well-known event riders May and Denny Emerson before becoming the barn manager for dressage trainers Gunnar Ostergaard and Ellin Dixon. She then moved to Germany to apprentice with George and Inge Theodorescu and their daughter, Monika, who was recently named coach of the German dressage team.

After returning to the U.S. in 1983, Gigi competed in eventing at the international level for many years, first making the United States Equestrian Team long list for the Pan American Games in 1990 and being invited to the USET training sessions in 1997 and 1998.  She completed the Fair Hill International CCI3* in 1997 and the prestigious Rolex Kentucky CCI4* in both 1997 and 1998.

In the spring of 1999, Gigi was injured in a riding accident, resulting in incomplete quadriplegia and being initially paralyzed from the chest down.  After years of hard work, Gigi now walks with a cane, rides and skis. She qualified for the Paralympics in 2012 but missed making the team by a narrow margin. She was the National Reserve Champion at the 2014 Para Selection Trials in Gladstone, New Jersey, and is ready to make her Paralymics dream a reality.

If you missed watching the documentary the first time EN posted it, you can scroll down to watch. You can learn more about Gigi on her website.