Gillian Warner recently had the wonderful opportunity to take a lesson on Jane Sleeper’s four-star mare UN to prepare for her Pony Club C-3 rating. We would be fangirling over a ride on UN too! Thank you to Gillian for writing, and thank you to Jane for giving Gillian such a cool opportunity. Go Eventing. 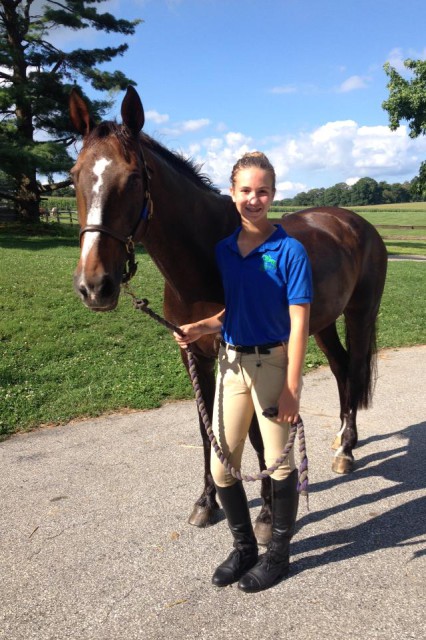 On Monday, I had the amazing opportunity to have a lesson with Jane Sleeper on her four-star mare, UN. It was exciting, and I was more than a little nervous!

A few weeks ago, my mom was looking through the Area ll Young Rider Silent Auction page, when she saw the lesson was up for bid. She texted me asking if I wanted to bid on it. Of course I wanted to … what 15-year-old eventer wouldn’t? I knew that this would be a good ride in more than one way: It would be fun, and it would help me prepare for my C3 Pony Club test. I knew Jane had helped many students get to the A level, so she could really help me with some tips on my riding, and also on switch riding.

We got to Jane’s farm, and everyone was so nice and helpful! We tacked up, headed down to the ring and got on. The entire time I was fan-girling over this super talented, super gorgeous, amazing mare in front of me. I probably looked like:

Jane asked me what I wanted to work on. My response was somewhere along the lines of: “I want to work on riding more from my leg and less from my hand. I’m a perfectionist, and I tend to micromanage the horses too much.” I had no idea how much work I just set myself up for!

As I was walking around, I was so focused on the fact that I was riding UN that I didn’t ask for a nice, forward, marching walk. No worries though; Jane corrected that quickly! Before I knew it, through all of the walk/canter/walk transitions, turn on the haunches, and remembering only to use my leg and body, I got very focused; I even forgot that I was riding a four-star horse!

Then comes the fun part: jumping! We’ll start with a simple cross rail, right? Nope! We started with an exercise to get me to use my leg more. Three jumps were set up in an S shape. I had to go over the jump, leg yield over to get a nice turn to the second jump, jump the second fence and then leg yield the other way to get a nice turn to the third jump. It showed me that I need to work on preparing for the next jump sooner since I missed the turn a few times (whoops)! But UN was so balanced and careful — it was such a cool feeling!

This is how I felt about that:

This is how my mom looked:

In the end, I kept my hands nice and wide …

… and we were victorious! Thank you to Jane and UN for being wonderful, patient teachers!

More video from the lesson: