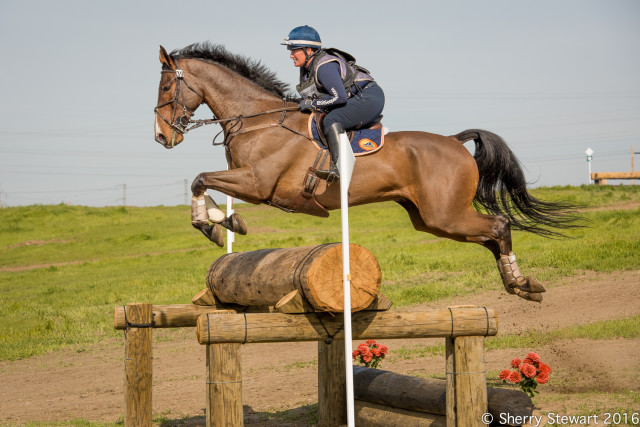 When Gina Economou first watched a free jumping video of 4-year-old Calidore, she said his trot was “whatever” but his canter was a 12. When the big young horse loped over a 4’6″ oxer without wings or guide rails, she told her friend Samantha Burkhart that worse comes to worst, he could always be sold as a jumper.

Today Calidore, better known as Leo, is enjoying the best of both jumping worlds, competing in Advanced eventing and Grand Prix show jumping with Gina in the irons, his owner Samantha proudly cheering them on and a league of fans following along with his progress.

“He connects with people. He’s a horse I just feel he looks at you and I swear he talks to you,” Gina said. “There’s something about him. I’ve never had a horse try so hard. I believe he wants us to come home in one piece and he does everything in his power to do that. Why would you ever get rid of a horse that tries that hard for you?”

There are no words to properly describe how much I adore this horse. No rails, one time fault. Ok, so it was a timed first round and I cruised around casually, but he left up every rail, and I gave him plenty of opportunities to have some.
I have been trying to soften up my bit choice on him, but have not had great success. Today in a moment of genius, or possibly delirium, I decided to put him in the KK loose ring snaffle. I felt that since I was not riding super well that his mouth was suffering because if it. I also figured that he was so good yesterday and that coming out again today he would be pretty rideable. It was either going to be great or an epic failure. Well I’m pleased to say that it was great! Maybe I should ride sick more often. It’s easy to be brave when you can’t think straight.
Sam, thanks for everything. Especially the late night effort to help find someone to ride him. You and he are truly special. I’m beyond blessed.
So now we have an off day. We will just go for an easy hack tomorrow and then the final class on Sunday.
Thank you to everyone at home for taking such great care of the horses while I have been gone!

The road to the top levels has not been an easy one. Although endlessly willing and personable, Leo suffered a painful abscess in his jaw early in his training that forever changed the way he responded to contact. Gina said he’s never been the same in the mouth since, but the big Dutch gelding has so much heart that Gina has always been determined to stick with him.

She credits Canadian dressage rider Leslie Reid with making it possible for Gina and Leo to “talk to each other and have a conversation.” She loves working Leo on the flat at home, and their performances at competitions are steadily improving.

In jumping, the bigger the fences got, the better he jumped. “I never have fear of him refusing or stopping, I fear I’ll fall off in the air because his jump is so big sometimes.” When Leo stepped up to the 1.40 meter classes, he seemed to just figure it out, she said, and Advanced cross country jumps seem that much more doable.

Adjusting Leo’s massive stride on cross country can be somewhat of a challenge, particularly for the more technical fences, but boldness has never been a problem. “Event horses tend to be catty Ferraris. He sees jump on hill and thinks he needs to power over it. He doesn’t always realize he has to land and go to a narrow two strides later at the right.”

Gina decided she “couldn’t be a passenger” at the level anymore and made some bitting adjustments to help with turning. Running in a double bridle has made all the difference and allowed them to continue their education.

We’ll see Gina and Leo competing in the upcoming CCI3* at Rebecca Farm this month and a four-star may be in the cards for 2017.

“I don’t think there’s a horse on the event circuit that has his scope. I know he’s completely capable of jumping a four-star question. I want to do a four-star and up until this year I thought it was just a pipe dream.” 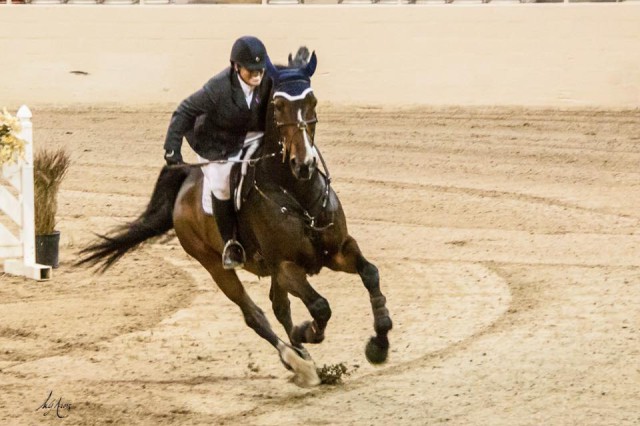 Gina and Leo, all smiles! Photo by Melissa G Arredondo.