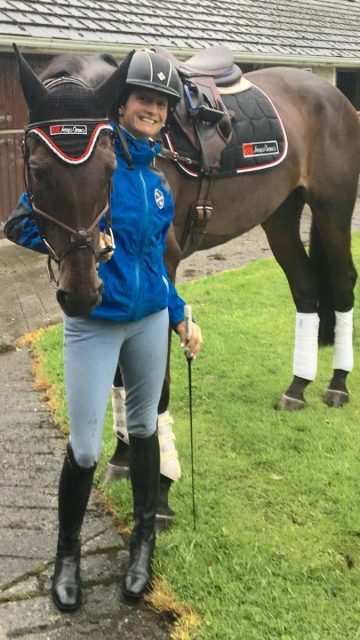 A dynamite contingent of five Americans and one Canadian are set to make North America proud this week at Millstreet International Horse Trials in Ireland, which will hold the third running of its CCI3* Aug. 24-27.

Sara Kozumplik Murphy with the Rubens D’Ysieux Syndicate’s Rubens D’Ysieux, fresh off an Advanced win at Millbrook Horse Trials, crossed the pond to contest the CCI3*, as did Jennie Brannigan with reigning U.S. National CCI2* Champion Stella Artois, owned by Beth Lendrum, Cory Walkey and Elsbeth Battel, who placed 10th at Bromont in her CCI3* debut in June.

The CCI3* horse inspection is later this afternoon at 6 p.m. IST/1 p.m. EST, with CCI3* dressage starting tomorrow at 1:30 p.m. IST, 8:30 a.m. EST. There is no live stream for the event, but there will be live radio for cross country on Saturday at this link.

We also have a strong group competing in the CIC3*. Hannah Sue Burnett has two rides in the division with Harbour Pilot and RF Demeter, both owned by Jacqueline Mars. Hannah will lead off for Team USA at 2:05 p.m. IST/9:05 a.m. EST today, and you can follow live scoring at this link.

Kim Severson and the Cross Syndicate’s Cooley Cross Border stayed in Ireland after competing at Tattersalls in May and are also in the CIC3* at Millstreet. The CIC3* is definitely a star-studded division, with Jonty Evans and Cooley Rorkes Drift also a pair to watch after the successful crowdfunding campaign to keep them two together.

Kathryn Robinson with her own Let It Bee are the sole Canadian combination competing at Millstreet and are also competing in the CIC3*, along with British-based American Katherine Coleman with her own Back to Business II.

We also have two entries in the CIC2*, with Katherine competing her own Monte Classico and Hannah aboard Cooley Dream LLC’s Cooley Dream. Hannah has one more ride at Millstreet in Jacqueline Mars and Christa Schmidt’s Cougar Bay, who is currently third in the CIC* on 43.6.

We will have previews of Mike Etherington-Smith’s cross country courses to bring you shortly, so keep checking back to take a virtual tour of the track. Sara Kozumplik Murphy went on a tour of the course with Thomas Duggan, who owns the property, and kindly sent in this video to share with EN.

Be sure to follow Millstreet’s Facebook page for photos. EN will be keeping you up to date on our North American contingent, so keep it locked here. Ride times and live scoring for all divisions are at this link. Go Eventing.