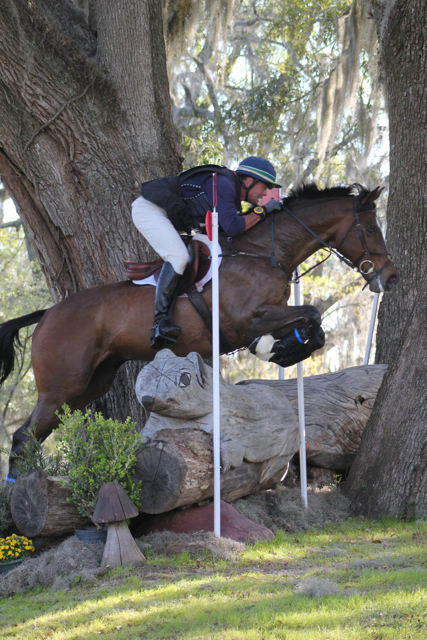 We reported in January that Madison Park, Kyle Carter’s Olympics and World Equestrian Games partner, has returned to competition following a devastating injury at the Blenheim CIC3* in 2011, during which Parker tore a ligament and slipped a tendon off his hock. Parker has had a wonderful start to his career comeback, most recently placing ninth and sixth in the open intermediate divisions at Rocking Horse and Red Hills, respectively. But Parker’s journey back to competing hasn’t been easy. While many vets and riders would retire a horse after an injury that is largely, even universally, considered career-ending, Kyle knew that wasn’t an option.

“I did my first two-star back in 1986,” Kyle said. “I’ve been doing this for a really long time with a lot of different horses. Through that career, I’ve dealt with and seen a lot of injuries. My feeling with all the injuries is that because the horses are competing for me on my behalf, it’s my responsibility to rehabilitate and get them back to where they were as much as possible. These horses are not a commodity. This is my business, and when one gets hurt, you can’t just quit. That philosophy is why I decided to try to bring Parker back.”

Making his own protocol

Kyle’s past experience with a similar injury also factored into his decision to rehabilitate Parker. Scotia Goldrush, Kyle’s parter for the 1999 Pan American Games, slipped a tendon off his hock during cross country at that event; he was in second place individually at the time the injury occurred. “I called vets, riders and trainers all over the world trying to figure out what to do,” Kyle said. “The resounding theme in all those phone calls was that this injury was career-ending. It’s the same injury that ended Biko’s career at Burghley and Lucinda Green’s horse Be Fair at the Olympics. I was asking everyone what they thought I should do. Everyone told me to turn him out in a field because he would never come sound again.”

But Kyle wasn’t ready to give up. He began researching the injury on his own and consulting with his father, who is a vet, and developed his own rehabilitation program for Scotia Goldrush. “I was able to practice retraining that hind leg to move in the correct path again,” Kyle said. “He was very trainable and tried very hard. Those are the things that are imperative to bringing a horse back after an injury like this. We got him all the way back to the three-star level. There was no protocol for it; we just made our own protocol. If the vet doesn’t have the answer, that doesn’t mean there is no answer. I just didn’t think turning him out in a field was the right answer, so I had a positive outlook that he could come back.”

Kyle has carried over that same positive outlook that helped him successful rehabilitate Scotia Goldrush to his work with Parker. “This time we went about it with a much different attitude,” Kyle said. “Parker has done so much for me, and he’s a horse that hates not working. There were people saying I was trying to push him, but I just wanted to give him a chance to come back to form. If he had plateaued and never got past that, then we still would have succeeded in getting him back to his best point. This injury does have a very poor prognosis, but not because of the injury. It’s because people don’t try. If the horse is the paramount feature in our sport and lives, we have to apply ourselves to giving back everything we can.”

Parker exhibited the same willingness and determination to work as Scotia Goldrush, which Kyle found very encouraging from the beginning of the rehabilitation process. “After the injury, he still had very good action behind; we worked on that leg to bring back the elasticity and muscle strength to balance him. It makes no sense; if one tendon runs a different way than another one, he mechanically should not be able to move that way, but he’s showing that’s not necessarily the case.” Kyle used a laser on Parker’s leg, as well as the water treadmill at the Sanctuary at Ocala to facilitate Parker’s rehabilitation. Last fall, Parker pushed through the final plateaus, and by December he was beginning to look very sound. “He went to his first show in January, and the dressage judge made no mention of him being irregular behind,” Kyle said. “With every test he’s done, there’s been no mention of it.”

That first event back at Longwood Farms in January marked a major milestone for Parker; he started back at preliminary and won his division. He continued to look and feel fantastic at both Rocking Horse and Red Hills; Parker is officially back. Interestingly, a knee issue Parker dealt with prior to the tendon injury seems to have resolved itself during his rehabilitation period. He’s also jumping better and looks tighter in his front end than he ever has. “He is strong and ready to go,” Kyle said. “Now it’s a matter of putting together a plan to give him that chance to keep campaigning. There’s nothing in his work that makes me think I can’t at least achieve three-star work out of him. For a four-star, if we ask him to go there again, he’s going to have to continue to show me he’s strong enough, and it might take awhile to get that strength back.”

Kyle is planning to aim Parker for the Chattahoochee Hills CIC3* in May, which he hopes will qualify the horse for Bromont. He’d also like to make the trip to Fair Hill for the CCI3* in the fall. “Next year, if all goes well, I could see him getting back and doing Rolex,” Kyle said. “Other things get in the way and there’s always complications, but I don’t see why he couldn’t go. When I competed him this year, I had people watch him who know him very well, because I don’t want to be out there galloping around and convincing myself he’s fine if he’s not. So far, the feedback from people like Buck Davidson and David O’Connor is that he looks just like the old Parker.”

Whether Parker comes back to run at Rolex again or not, Kyle has the satisfaction of knowing he believed in a horse when other people didn’t. “I’m so fortunate to have him,” Kyle said. “He gave me so much. A horse like that inspires you to work on their behalf. And he sure is happy to be back out. After he finished cross country at Red Hills, he went back to his stall looking like someone had shot him up with happy pills. Anyone who has seen him go knows how much he enjoys it and how exuberant he is. He needed me to help him get back, and he earned that effort on my part.”