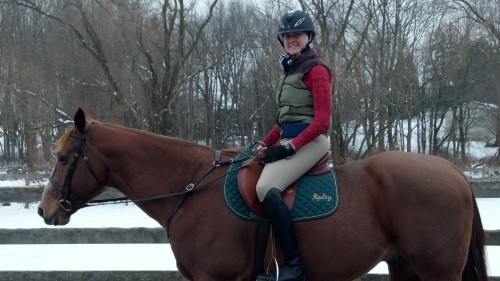 Two things that have never mixed very well have been the barn and my cell phone. Since I finally took the plunge a couple of years ago to upgrade to a smartphone, I’ve been trying my darndest to keep it safe and functional. Well, relatively. One of my pet peeves is the fact that no matter how hard I try, I’ve gone through case after case. And, let me tell you … .those things start to add up after a while. I really don’t even want to begin to try to go back and add up what they have all collectively set me back since I’ve had this phone, as I’m sure it’s cringe-worthy. I don’t think it would be a stretch to say I’m starting to approach what the phone itself cost! And the worst part? While I’ve been happy with my phone itself, I’ve generally been unhappy with the performance of said cases that I’ve used.

The exception to my problematic phone case rule has been my super clunky but quite functional Otterbox. Since my phone is basically “going to war” when I take it down to the barn, I finally upgraded to the biggest and toughest Otterbox that I could find. And it only came in black (groan). I do find that over time, the built-in screen protector of the case has gotten pretty badly scratched up. Plus, I occasionally have to take the two-layer case off because somehow hay gets down inside of it. I think we all know how hay can be so pesky when it gets down into all of the seemingly impossible places that it does!

The other big issue that I’ve faced, is that even with the Otterbox, I never have anywhere to really keep my phone. It seems to eternally slip out of my pocket. When I’m mucking stalls. And lands in horse poo. (Ick!) I also do have a second case to keep it in while riding; it is pretty and purple! However, I can barely jam my phone into it while it is contained in its Otterbox. And with the way that it clips, I can only attach it to breeches that have belt loops (and even then it bounces all around while I ride).

Through all of these challenging conditions with my phone, I’ve always thought there has to be something better out there! Turns out … there actually is! I just had the opportunity to try out a relatively new, patent-pending phone case called the GoVelope. What if I told you that the GoVelope is a phone case that was developed by an eventer, and it is specifically for riders? Pretty cool, huh?

I had the opportunity to chat with Dr. Joanna Newton, who is the eventer and inventor behind the GoVelope(catchy, huh?). Joanna, like many of us, has a hectic schedule; she related to me that by the time she would get finished up at work and make it to the barn to ride, it would be dark out and no one would be around. While she rode Reeces, the young filly in her life, Joanna experienced difficulties finding a phone case that would work for her in the saddle. After trying cases that attach to the arm or ones that attach to the leg, only to find that they did not perform well for her, Joanna often wound up riding while leaving her phone on the arena fence.  Since there wasn’t an adequate case available in the market to fit her needs, Joanna ended up designing her very own case, and so the GoVelope was born!

While we were chatting, Joanna related the three main reasons that she really was motivated to design a case to meet her needs (as well as the needs of other riders):

1. Safety: Since Joanna often rode Reeces solo, safety was something that was first and foremost on her mind. Having a phone case to wear on her person that would stay in place without budging was really important. After all, we all fall off now and again, and if that is the case, it is important to be able to reach someone if you need help!

2. Awesome apps available: We live in the age of apps. There is pretty much an app for almost anything that you can think of at this point, and many are available to use while you are in the saddle! By having your phone handy and easily accessible, you can realize the full benefits of your apps.

3. Convenient for “rounding up the troops” at events: Ever been at an event with a large group and try to keep track of everyone … where they are now and where they are supposed to be? Part of the group is at the dressage arenas, others are at stabling and some of them are walking cross country. What a pain it is to try to reach someone to tell them to get their butt over to walk cross country when they don’t have their phone with them (because they have no pockets). By outfitting the team with a phone case that works, it can help ensure they are all reachable. 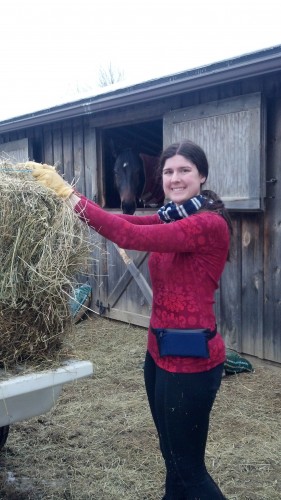 In a rush to move hay before a snow storm? No problem! the GoVelope stays in place using the belt extension. Plus … a Mark photobomb.

Another huge plus for me, is that the GoVelope is made in the USA. In speaking with Joanna, she mentioned that it was very important to her to have the cases manufactured in the USA, even if they cost just a bit more.

At first glance, GoVelope may not impress or dazzle you with fancy looks. It’s design is quite simple in appearance, yet I’ve found that is oh-so-functional when I need it to be. The case is available for purchase in several standard colors, including black, pewter, navy and purple. Custom cases are also available and can be made in your team colors or in another custom color or pattern. Depending on your request, a minimum order of 10 or more custom cases may be required, or smaller quantities may be available with a surcharge.

GoVelope is made out of waterproof neoprene and boasts features like a watertight zipper and a non-slip backing.  The case itself is not waterproof and is not guaranteed to help your phone survive being doused in water; however, it is water resistant and weatherproof, so you should find it to keep your phone safe while you are hosing down your horse after a workout or even if you are working in the rain. And it would hopefully protect your phone if you got dumped off in a water complex and hopped right up (so just don’t try to hang out in the water if you fall in on a warm day!).

So let’s get down to the nitty-gritty. Now did the GoVelope perform for me? I’ve been wearing it all around the farm here, for anything from getting my normal barn work done, to moving hay down, to riding. Whenever I get ready to head outside to the barn, I always grab my keys and my phone. Since I’ve been wearing my GoVelope, I never have to worry about where my phone is … or where it might fall. I’ve worn it both by attaching it directly to the belt loops of my breeches or jeans and by using the belt extension attachment (for when I had on breeches with no belt loops).

And I have to say, the GoVelope did not move while I was wearing it. Period. Not when I was mucking. Not while I was climbing up in the barn to throw down hay. Not while I was hopping up and down from my pickup truck’s bed. Not while I was mounting up to ride. Or while I was riding. I was expecting decent results when I directly attached the case to my belt loops, but I was skeptical of how it would perform when I used the belt extension attachment. I was a little surprised because I expected some slight shifting around, but it didn’t noticeably shift much while I wore it in that manner. I honestly did forget that I was wearing my phone a few times. That’s equestrian smart functionality for you, though — a case that protects your phone from the elements and follows along so well that you forget it’s there.

Use the code 12Days on the GoVelope website to receive a code for $5 off your next Dapplebay order through Dec. 20. How great is that? Happy Shopping!