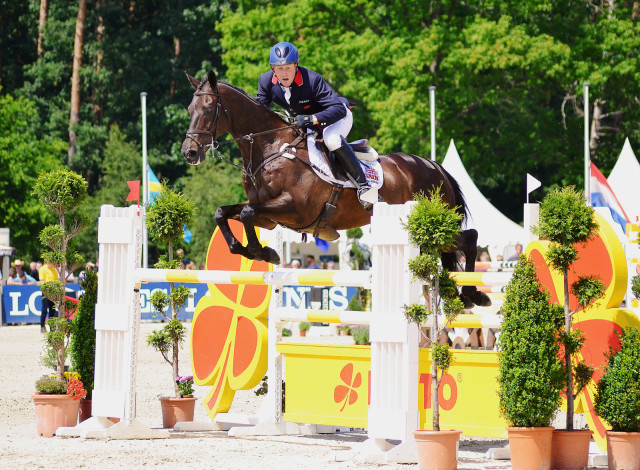 The WEG squad announcements continued this morning with Great Britain naming its team. Great Britain will name the final four team riders after the first horse inspection at WEG, with the remaining two riders competing as individuals. The squad in alphabetical order is:

The press release included comments from all of the riders on their selection:

Tina Cook: “Thrilled to be selected, especially on a home-bred horse, who I think is a superstar. I’m very excited for the future for him and I’m so thrilled for Jim Chromiak, who’s been a long term and loyal owner of mine for over twenty years. WEG this time around [commenting about Kentucky, 2010] will be hugely easier in terms of logistics as there’s no flight involved but this doesn’t take away from the prestige of a World Champs – where you are competing up against the best in world.

“He’s [De Novo News] so adaptable, he’s a big horse and has scope. It’s his first Championships so who knows, but he has done three four stars now, with a ninth place at Burghley. He didn’t start eventing until he was six, so to have done what he has done by the age of 11 is amazing and shows what a very talented horse he is, I’m very excited to see how he’ll go.”

William Fox-Pitt: “I am thrilled, it is always an honour to be able to secure a place on the team and this year we look hopefully very strong as a team, so I hope we have a good result and get a qualifying result for Rio.

“This is my fourth WEG [after Aachen, Jerez and Kentucky] these Games are always so special and it’s a privilege to get the chance to represent our country.”

Pippa Funnell: “It’s a special thrill for everyone concerned at The Billy Stud for me to be selected on a homebred horse, especially as he [Billy Beware] is the first of the Billy Stud horses to be selected for the British Senior Squad in Eventing. I am equally delighted for his owners, Jonathan and Jane Clarke who have been very enthusiastic supporters and have been with me for over eight years now, so this is really exciting for them.

“I am delighted to be joining my old team mates; it is always a huge honour to be asked to be part of the team. I have missed the camaraderie so much so it’s really wonderful to be with them all again.

“This horse is extra special to me as our good friend Bridget Stack, who sadly passed away a few years ago, named him ‘Gorgeous’ when he was three. She said that I must always keep him to Event and not go into that showjumping job! She said he would be very special which he is, so I always smile to myself when he has a good result, she was so right in her predictions.”

Zara Phillips: “Obviously I’m really excited; it’s fantastic to be part of a team again. We’ve got a bit of work still to do to get back to where we were last year but will have a few more outings to make sure we are right on target with our preparation but it’s great to be back, fingers crossed. It’s always that extra bit special with every nation being involved. Last time [WEG, 2006] was our first four star Championships, so was a totally different experience, we had a fantastic week and I hope we can produce a good result for the team and the country.

“High Kingdom has improved each year and every time I’ve taken him to a big competition he’s got better and better. He’s felt good this year and hopefully will peak at the right time. None of us can do it without our owners and Trevor [Hemmings] has been with me a long time; he’s been a huge part of the yard for such a long time and I’m glad we’ve found such a good horse for him.”

Izzy Taylor: “I’m very excited and to be going to another Championship, which will be a different kind of Championships [to the Europeans in 2013]; it’s exciting. It kind of feels, on a personal level, that I’ve made a step up. I’ve never spectated at a Worlds before so I don’t know what to expect but I can imagine that there will be a bigger atmosphere and the event will have a lot more about it.

“I’m really happy to be riding Ellie [Allercombe Ellie], she’s still quite new to me but we’ve built up a good relationship. I’m really pleased for her owners; I can imagine it will be even more special for Susan, as she bred her.”

Oliver Townend: “It was a really nice surprise to hear I had been called up for the team. We went to Luhmühlen for his first CCI4* last weekend without any real expectations yet he exceeded anything we could have hoped for him and more [finishing in fourth place].

“I am so pleased for his owner Karyn on his selection as she helps me so much in running my business and keeping everything going for me. I took over the ride from her [Karyn] when she was off with an injury in 2010; we won our first competition together at Aston Le Walls and so she kindly said I should keep on with him. He has just gone from strength to strength with every question I ask of him, we honestly, honestly never expected him to get this far but if I do my job, he does his without any questions asked.

“Karyn bought him eight years ago for next to nothing through an advert in New Zealand, so when he won the CIC3* at Burnham Market this spring we said to ourselves that even if he never does another thing in his life he won’t owe us a thing. He is such a good mate to us, is lovely to have around the place and is never a moment’s bother to anyone.  He has a fantastic brain and is just such a cool little horse, we are incredibly proud of him.

“Last time I went to a WEG I was just a young lad of 23! It is a fantastic competition as you know that everyone there is the best in the world and it will be great to spot some of my equestrian idols again, some that I have followed since I was young.”