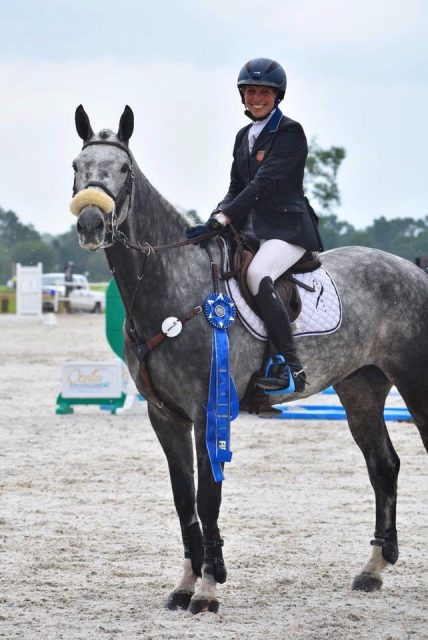 Clear rounds were rare today over Chris Barnard’s show jumping course today at the Ocala International 3-Day Festival of Eventing, presented by Ocala Ranches, at the Florida Horse Park. Out of 82 CCI* and CCI2* competitors who show jumped today, only 28% left all the rails up and incurred no time penalties. However, that’s what makes eventing more than just a dressage show.

Liz Halliday-Sharp and her own 7-year-old Irish Sport Horse Cooley Quicksilver headed to show jumping tied for the lead with Elisa Wallace and Steve and Vicki Sukup’s Riot Gear (Confetti x Lucy, Fuerst Gotthard). Elisa and the 9-year-old Oldenburg, affectionately known as “Rye Bread” pulled two rails to ultimately finish fourth. However, Liz and Cooley Quicksilver were left with little breathing room as Doug Payne and his own Quantum Leap (Quite Capitol x Report to Sloopy, Corporate Report) had secured one of the elusive fault-free rounds. Taking all that pressure in stride, Liz and the promising young Irish horse jumped a careful clear, in torrential rain and windy conditions, adding two time penalties for a final score of 31.4 and a win in the gelding’s first CCI2*.

Doug and Quantum Leap, a 7-year-old RPSI owned by Susan Drillock, finished second (and on his dressage score) in the gelding’s CCI2* debut. Leslie Law and his and Carmen Anderson’s 9-year-old Irish Sport Horse Call the Law (Jack of Diamonds x Amazon Cruise, Cruising) added one rail for third place and a final score of 35.9. Fifth and sixth place were both big movers up the leaderboard thanks to fault-free rounds. Shanon Baker and her 11-year-old Irish Sport Horse Ballingowan Zeal (Seabrook x Shara Bride, Clover Hill) finished on 38.2 for their first CCI2* completion, and Hope Walden and and Elaine Walden’s 14-year-old Dutch Warmblood Zatopek B (Lando x Scaramouche B, Carlino) finished on their dressage score of 39.8 in Hope’s debut at the level.

The skies opened up, but #babyQuantum, owned by Susan Drillock, couldn’t have cared less. He jumped an #incredible clear in #showjumping to finish 2nd in his first CCI**

Looking now to the CCI*, Alexandra Knowles and Princess B, a 13-year-old Dutch Warmblood mare owned and ridden by Nancy Elberty, were fault-free in the final phase, finishing on their dressage score of 25.3 and moving up from fourth to take the win.

It’s been a very busy weekend for eventing both here in the States and across the pond. Thank you for keeping it locked on EN and thanks so much for reading. Go Eventing. 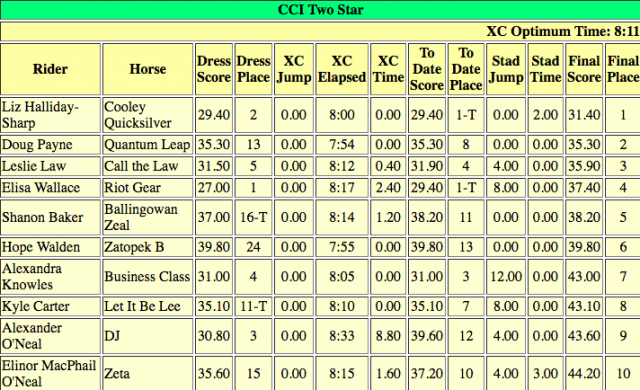 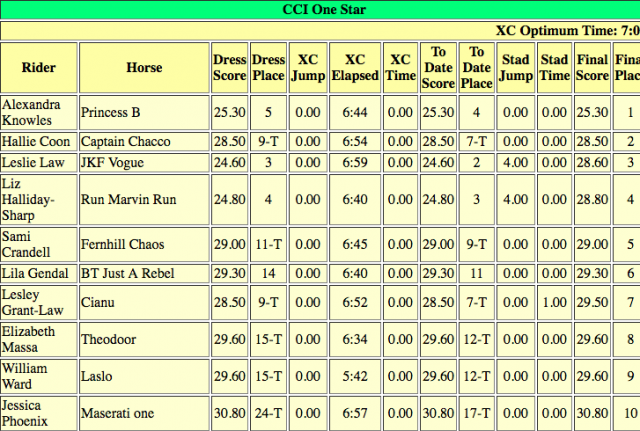