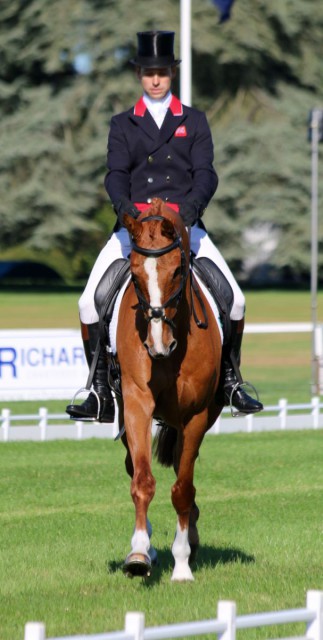 Harry Meade got the Blenheim Palace CCI3* dressage ball rolling early Thursday when he and Orlando entered the arena as one of the first combinations to go and set the benchmark that the rest to follow would need to try and match.

Orlando, previously an Izzy Taylor ride, is capable of doing a nice test, and didn’t disappoint here to Harry’s relief as he has only had the ride since July.

“It’s our first CCI together, he’s done some really smart tests and we had a good run together at Hartpury so it was nice to get into a big arena,” Harry said. “It’s always interesting because you’re a little bit still experimenting with different warm-ups when you’re a new partnership but I was really pleased with him. He has a lot of natural elevation and engagement and power in his work so I just worked on having the relaxation to go with that and I was happy, I don’t think he threw away any marks.”

Orlando is missing his left eye after bumping it in the stable a few years ago; he was starting to go blind in it and so the decision was made to remove the eye at the beginning of this season.

Harry doesn’t think it will impact him in his eventing career: “When I first started riding him I took him cross country schooling and progressively put him in a more and more difficult position around a tight, left bend to a fence that he didn’t know was there and I watched his ears to see that moment of realisation when he could see the fence — and amazingly he can still see with what I would call pretty normal vision. To me, it doesn’t affect him. The only time it does is if things like a marquee or something similar flaps on his blind side and he can’t see it he’ll be more worried than if he could.”

It’s hard not to gush about Harry’s wonderful commentating at Burghley recently, so I did, and he modestly replied, “I love eventing, I love cross country riding; my first love is being in the saddle and being the one doing it and if I can’t do that I get enthusiastic chatting about it so I’m quite happy either way!” 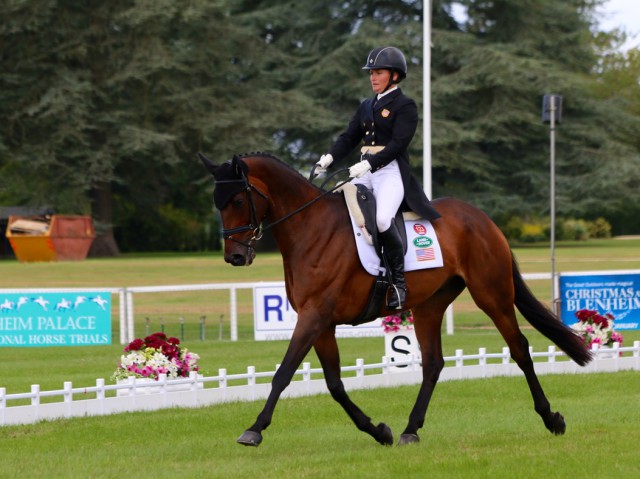 The next break saw three of our U.S. riders and Hannah Sue Burnett brought the goods on her experienced partner Harbour Pilot. Their test was relaxed, forward and mistake free, and with a score of 41.7 they’re sitting behind Harry in second currently.

Hannah was pleased with Harbour Pilot who she said was happy to get up to the main arena with more people around and strut his stuff. “He was great! He felt really good. He was a little bit tense yesterday when I was riding him at the barns and a little bit this morning as well but then as soon as I got him up to this practice ring before the test he was really, really rideable and easy and fun — I could push on him and he felt like his normal self at home which was encouraging.

“I’m really, really excited. The last time we came to England was at Burghley and he was so wonderful there but we didn’t get to finish so I’m excited to have a repeat performance, hopefully better, and finish the event!”

This is Hannah’s first visit to Blenheim. “It’s beautiful, I love it! It’s got a great atmosphere and everyone’s excited to be here and friendly, it’s fun!”

Hannah has yet to walk the CCI3* cross country, explaining “If I go on Thursday I usually try to wait until after my dressage so I can focus.” But she has promised to tell us her thoughts on it later. 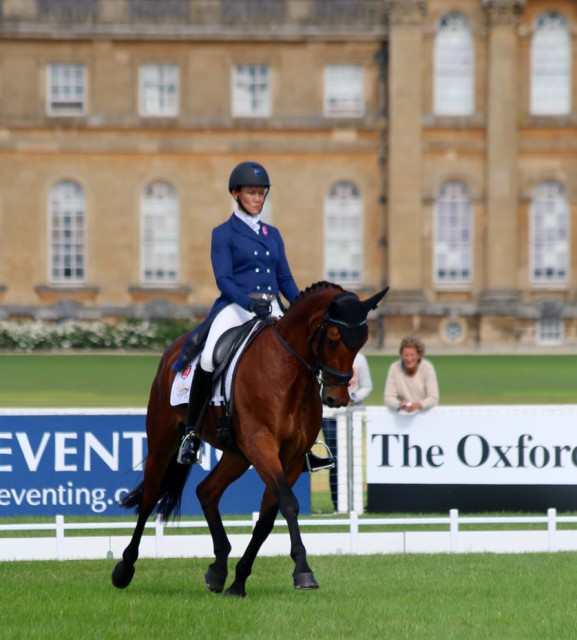 Tamie Smith and Twizted Syster rise to the occasion at Blenheim. Photo by Samantha Clark.

Tamie Smith was the first of our U.S. riders to go into the ring and did America proud. She kept Twizted Syster focused and rideable and the overall impression was very nice. The changes were not quite clean but there were some lovely moments promising much more from this pair.

Tamie was happy with her test and how hard her mare tried for her. “She was great, she was really workmanlike,” she said. “Normally she can get a little hot and tense in the ring and she didn’t at all, she felt great. She’s been going really well, she thinks she likes England! I like the grass actually, it kind of keeps them slow! The atmosphere didn’t bother her, I feel like I’ve just had a really good horse since I got here so I’m really excited for Saturday.” 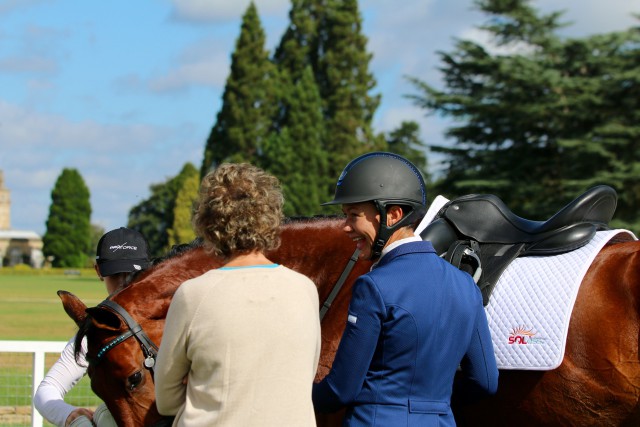 Tamie was off to walk the course so we’ll bug her for her thoughts on that later too, but she said she came away inspired from spectating at Burghley last weekend.

“Burghley was amazing. I can’t wait! I can’t wait to go out the start box there. I thought it would be more intimidating, I expected it because everyone says it’s the biggest and the hardest in the world but I felt like I have a horse to do that with so I’m really excited about getting there. I don’t know when I’m going to get there — maybe in a couple of years.” 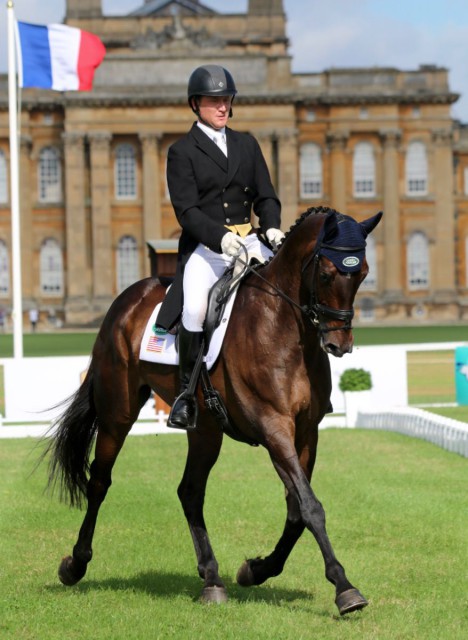 Kurt Martin rode a fairly tense Deluxe Z beautifully, managing the tension with tact and their test improved as they progressed and the horse relaxed a little.

Kurt was philosophical when he left the arena: “He was a little bit spooky and tense which he hasn’t been in the warm-up but I’m sort of accustomed to that. I thought it improved as he went around. I’m happy with him. It’s such a great opportunity to be here and I’m really thankful to be here on such a nice horse, it’s really a dream and I’m lucky to be here.”

Kurt hasn’t done a test on grass on Delux Z since he was at Intermediate level and was slightly surprised by the effect. “It felt tighter, the arena felt a little bit smaller and he’s a big horse,” he remarked. 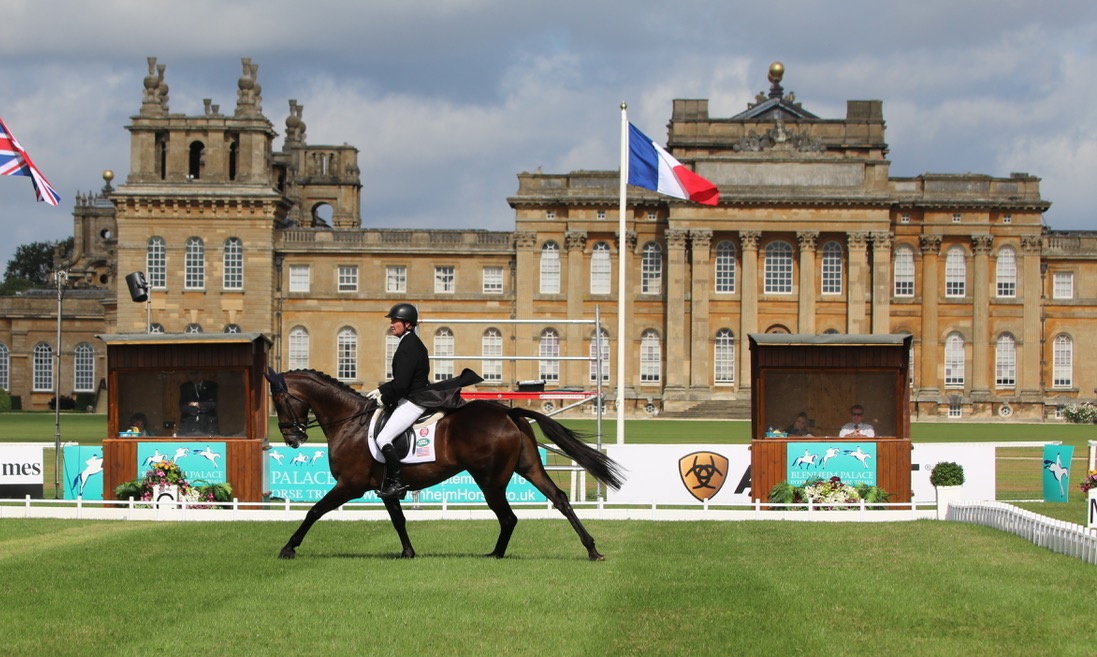 Riding in front of Blenheim Palace, Kurt Martin and Delux Z in the CCI3*. Photo by Samantha Clark.

Kurt has had a little look at some of the cross country but hasn’t managed to walk the entire course yet. “I think it looks good, a lot of galloping space and an opportunity to get rolling at the beginning which is really important for this horse.”

Delux Z came over from the USA with the Burghley horses and has been based at Jesse Campbell’s yard. Kurt also got to visit Burghley: “I got to walk around and support my friends there so that was really exciting, this is a growing opportunity for myself, it’s such an education to see the best in the world compete and ride and train.”

Luckily though, he assured me that riding against them here at such a prestigious event such as Blenheim doesn’t affect his own nerves. “I was walking up here and thinking about it: It’s just about this horse and I and the four years that have gone into our relationship. It’s about competing against ourselves and the course that has been set and I don’t worry about other people.” 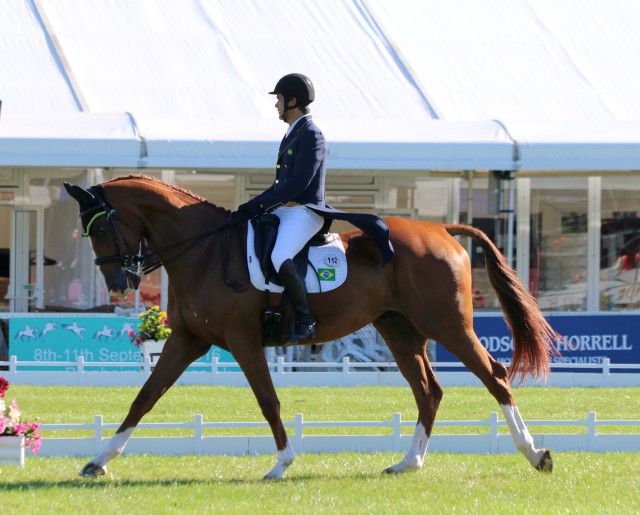 Nilson Moreira Da Silva and Muggle taking each day as it comes. Photo by Samantha Clark.

Nilson Moreira Da Silva had a nice outline with Muggle and looked to be set for a nice test earlier but unfortunately he forgot his test a couple of times and lost his way.

He explained, “I was quite happy with the horse, but not happy with myself, I basically gave six points away but it’s another week and I’m looking forward to the cross country and seeing what I can do.”

Nilson of course has re-routed from Burghley where he got as far as fence 5 on the cross country, the second water crossing. “I think he got a little shy, and when he got into the water the first time he was looking around at everything more than actually focusing on the jump. It’s hard at a competition like that, the second jump into the water was so big and I didn’t have his attention. We’ll keep on working and every day is another day, that’s my goal.”

We have lots more to look forward to at Blenheim this afternoon: Holly Payne Caravella and Santino do their test, and we’re also expecting great things from Bettina Hoy and Seigneur Medicott.

There is so much going on here at Blenheim and it’s so spread out that it’s impossible to cover it all — in fact I was sorry to miss Kylie Lyman and Lup The Loop who went in the CIC3* at about the same time as our U.S. CCI3* contingent. Tamie Smith goes in that division later this afternoon on Dempsey, very shortly after Holly’s test up here in the Marlborough arena so I’ll try and do better, Run Samantha Run! In the meantime it’s all systems go here at Blenheim Palace. Go Eventing!