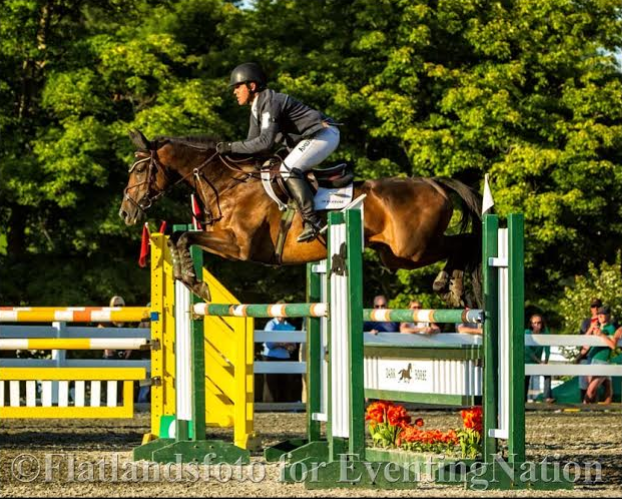 When Denny Emerson gives a shout out to Buck Davidson via Facebook and an EN reader emails us also singing his praises all on the same morning, we post it here for you to see.

With the Team USA horses shipping out to France on Friday, Buck is in his final days of preparation for this year’s World Equestrian Games with Ballynoe Castle RM, looking for redemption after the 2010 WEG in Kentucky didn’t quite go their way.

Here’s what Denny had to say on his Facebook page after watching Buck compete seven horses at GMHA Horse Trials — something he does seemingly every weekend:

“The phrase, ‘At the height of his powers’ — this can be used about those elite in sports, music, theater, politics, many endeavors, who are at the very top of their game.

“Buck Davidson, I think, is there right now. All the stars are aligned, his age, his skills, his supply of super horses, his drive.

“I watched him jump dozens of fences in the GMHA warmup ring yesterday, every one a perfect clone of the others. And weekend after weekend, the same, the same.

“How long does it last? Time will tell. Not forever, but while it’s there, it’s powerful to see.”

“I’m home doing the Monday morning quarterbacking that normally happens after a weekend of eventing. I have just returned from the GMHA Festival of Eventing, reflecting on the weekend. I had to send a note because I had the pleasure of watching Buck Davidson compete many horses this weekend, and I have to say that I am just in complete awe of his hard work and horsemanship.

“I have been a professional horse person for many years and have been able to watch many upper-level riders at so many wonderful events, but watching Buck operate his business this weekend was really something to behold. It was a free clinic in horsemanship and hard work; anyone that didn’t take advantage of watching him missed out on an opportunity to learn from the top rider in the country.

“The kid is a machine, and his team of students and grooms are finely tuned. Honestly, I can’t imagine how incredibly fit he must be to ride all of those horses and do it at the level he does. Every single horse he was on was turned out as if going down the centerline at the World Equestrian Games and glistened with the athletic ability of future super stars. He has proven that he is not just the famous ‘Davidson’ name but deserves every accolade that has come his way.

“Buck made me proud to be an American eventer; he is at the top of his game, ready to show the world that the United States is ready to be back at the top. I am one eventer that was inspired this weekend just by observing one of the best in the world. GO BUCK DAVIDSON, GO AMERICA, GO EVENTING!”

Video of Buck and Petite Flower at GMHA courtesy of Thehorsepesterer: