In the fall of 2017, EN writer Maggie Deatrick and her long-time partner Divine Comedy, aka Dante, were set for a comeback to the 3* level after two years of rehabbing a tendon injury. After feeling something wasn’t quite right with him, she went down the rabbit hole of treating and diagnosing for what she hoped would be manageable arthritic changes. Ultimately a CT scan revealed a career-ending issue instead. Dante has now happily been transitioned into a pasture puff for the next couple of years, with hopes of a career as a lower level schoolmaster in the future. 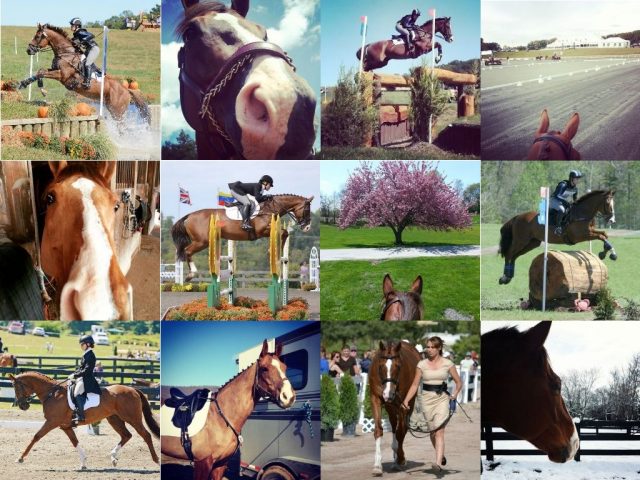 Today is the first day of our second decade together. Today, things are different.

But this year, things change. Our relationship as we’ve known it is over. We will never go out together again to face life and death. We have to be something else to each other now.

Your heart of a lion has outgrown your long-backed, upright-pasterned body. It can’t do what you want it to do, but you’ll keep trying, because that’s the sort you are. But I know you better than I know myself, and I knew something was wrong.

I’m devastated I found it.

I’m so grateful I found it.

It’s been hard. Ending the relationship we’ve had has been both the easiest and hardest decision I’ve ever had to make, but I know that in order to protect you, I had to make the call.

For a while, I couldn’t stop thinking about the things that would never be.

Ending it meant we’d never fly over the hills of Kentucky on a Saturday in April amidst cheers from a crowd of thousands. We’d never tackle the sandy hills of Carolina, an event I tried to attend for years and never managed to get to. We’d never dominate the CCI3* course at Fair Hill, a venue I knew you loved by the way your strength swelled like the rising tide beneath me at minute eight in the two-star.

But the longer I thought about it, the more I realized that the things that we did accomplish were so much greater than the things we didn’t.

You’ve brought me further than I ever imagined I could come. You never knew your conformation was ill-suited to upper level eventing. You didn’t care that you were supposed to top out at Prelim. You weren’t done there. You dragged me up the levels, bouncing over three-star tables as if they were nothing when everyone once thought you were scoped out at 3’6″. You didn’t care how embarrassed I was after you gleefully misbehaved during dressage or jumped around show-jumping by braille. You knew you’d make it up to me on cross-country day, and you always followed through.

Before you, I’d never even run Training, never placed high enough at any event to get a ribbon. At our very first event, you rewarded me with a low twenties dressage score and led from start to finish. At the end of our second year we were running Preliminary and the following year tackling FEI events, including a third place finish at one of the last long-format CCI ever held.

Together we ran over courses from Jersey Fresh to Colorado, from Maui Jim in Chicago down to Rocking Horse in Florida. We finished on your dressage score in our very first Advanced, a weekend I will never forget. We jumped the very high side of an angled brush in our second Advanced at Poplar Place when you drifted on take-off, and yet cleared it and galloped on. We had a personal best dressage at Fair Hill CCI2*, in a field 110 strong, putting us in the top quarter of the field after phase one.

You taught me patience, over and over and over, on the flat and in the show jumping. Everything you did, you did in Capital Letters, emphatically and enthusiastically, and sometimes embarrassingly. I spent an entire decade learning to be a better rider, for you.

On cross country day, you were king. Present you to the fence perfectly, you jumped economically. Give you a challenge, like an off distance or a big spread, and you would jump the moon. The feeling of power that rose like a wave under me when you were fit and fast on course meant I knew making time would be easy that day. I had to learn not to let my confidence translate into cockiness, to not make a mistake out of complacency, simply because I was sitting on you.

I didn’t know that a lone Intermediate run this fall would be our final run together, but I’m grateful to have had one last taste of flying on your back. After two long years of patient rehab after a tendon injury, I thought that run was a taste of what would be coming, not a finale to a long career. It was easy for you, even after a long hiatus.

The tendon is strong as iron now; I’m proud it wasn’t what ended your career.

All these things we did together, you and I. These memories are the things that were. I choose not to regret anything.

Here’s to Dante, the brother of my soul. You’ve given me everything you had, and been so more to me than you were meant to be.