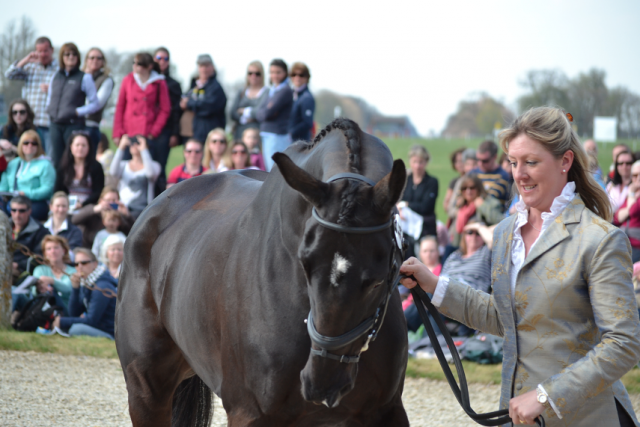 Nicola Wilson and Opposition Buzz at Badminton in 2013. Photo by Jenni Autry.

First British team stalwart Miners Frolic retired earlier this year, and now Nicola Wilson has announced Opposition Buzz will step down from running four-stars to finish out the season at the Advanced and CIC3* level, Horse & Hound reports. “He would love to go to Badminton and he is fit and well,” Nicola told H&H. “But he is such a special horse and he has given us so much we would hate for anything to happen to him.” At 17, Rosemary Search’s “Dodi” really has nothing left to prove, having completed 11 CCI4* events during his long career, including trips to the World Equestrian Games and Olympic Games.

Dodi completed his first CCI4* in 2007 at Badminton, where he finished 16th. He went on to complete Badminton four more times, with his best finish coming in 2008 in seventh place. He also completed Burghley three times, finishing in fifth in 2008. American fans will remember his trip to Rolex in 2009, where he finished in 11th place. Dodi also returned to U.S. soil in 2010, where he represented Great Britain in the 2010 World Equestrian Games. He also competed on the silver medal winning British team at the 2012 London Olympics.