With Hurricane Florence forcing an unexpected rest day between cross country and show jumping, the event riders at the 2018 FEI World Equestrian Games weren’t quite sure what to expect in yesterday’s finale at Tryon. Some horses came out better for it having the extra day off, while others didn’t jump in their usual form.

The schedule change certainly set the stage for what proved to be a nail-biting finale. We already shared numerous quotes from the riders in our show jumping report and press conference report. Read on for more comments from the riders that stood out to us.

We still have much more post coverage to bring you from WEG. Stay tuned. 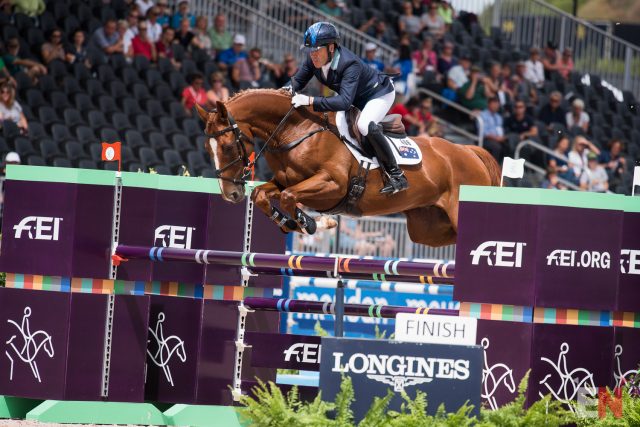 4th – Andrew Hoy and Vassily de Lassos – Australia
Clear round to finish fourth on their dressage score of 29.8
Moved up 25 places after dressage

On Vassily de Lassos producing such a strong result as only a 9-year-old: “Who knows where he can go from here, but every time he comes out the door — the bigger the show, the better the performance.” 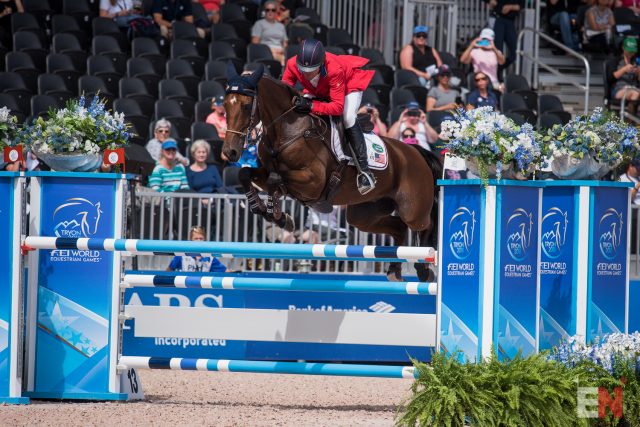 13th – Phillip Dutton and Z – USA
Clear round to finish 13th on 34.0
Dropped one place after dressage

On the U.S. team failing to qualify for Tokyo: “We were disappointed and had high expectations about what we could do, and it didn’t come off. If a couple things had gone a different way, we would have been a lot higher up there. It’s a position we’ve been here before and quite a few times. I think Erik’s got a good plan going forward, and he hasn’t had the job very long. It’s not fair to expect him to make any changes so far in our performance. The cross country riding in the world is very strong at the moment and we have to catch up to it with horses and riders.” 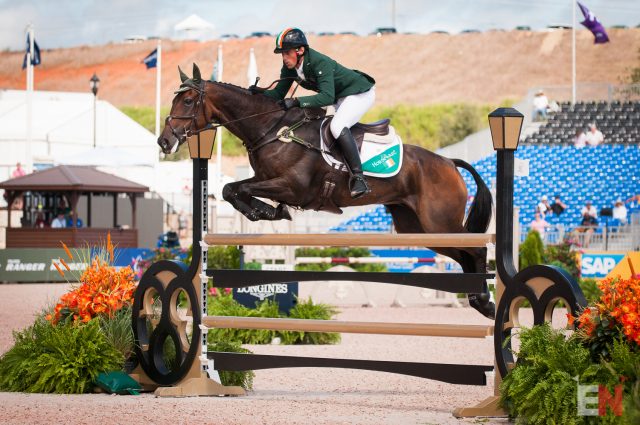 14th – Sam Watson and Horseware Ardagh Highlight – Ireland
Clear round to finish 14th on their dressage score of 35.5
Moved up 49 places after dressage — biggest climber at WEG!

On the heart-stopping moment when the horse drifted right in the treble: “My foot hit the standard. His right drift is something I’ve got to work on all the time. It gets me in combinations. It got me in Luhmühlen; it got me in Boekelo last year; today it got my right foot but thank God it stayed up.”

On Ireland’s success: “We’ve had a lot of fun this week, but we’ve been focused. We’ve been really well prepared. We’ve got results over the last 12 months that show that we should be doing what we’re doing, so for us this is all just gone to plan. This is it. We’ve had some hard knocks along the way. We deserve it.”

On the Irish team: “We have cool cookies. You talk to Cathal Daniels and he’s like Phillip Dutton —you’d think he has the mileage, he’s just so cool, so I love competing with him. Sarah (Ennis) I compete with day in and day out at home, and she’s such a fierce competitor. Padraig (McCarthy) is too.” 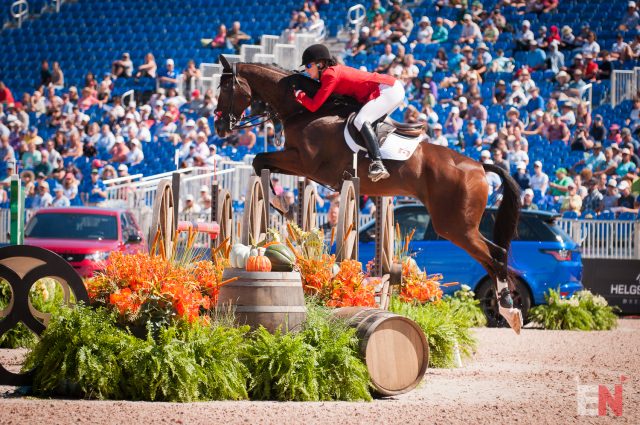 Selena O’Hanlon and Foxwood High (CAN). Photo by Leslie Threlkeld.

On the rest day before show jumping: “I think if the horses were feeling fine after cross country, they can only improve. If you had a horse that was  not feeling as great after cross country, sometimes day two is worse. I know myself when I fall off, the day after I’m a bit sore but on the second day I’m really sore. So I don’t know if it works the same for the horses, but that would be my guess.” 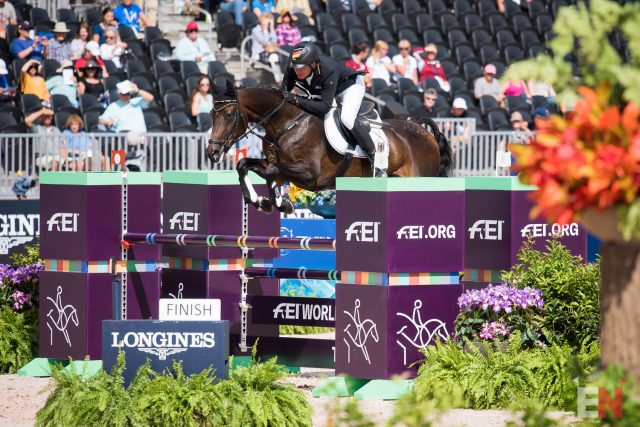 On Germany’s performance: “I wanted more and we wanted more for the team. We have to assess the situation. We have a strong team with good riders and great horses. It doesn’t help to cry over past successes. We have to pick up ourselves and need to be able to compensate if somebody like Michael (Jung) is not here. Our base needs to get broader again.” 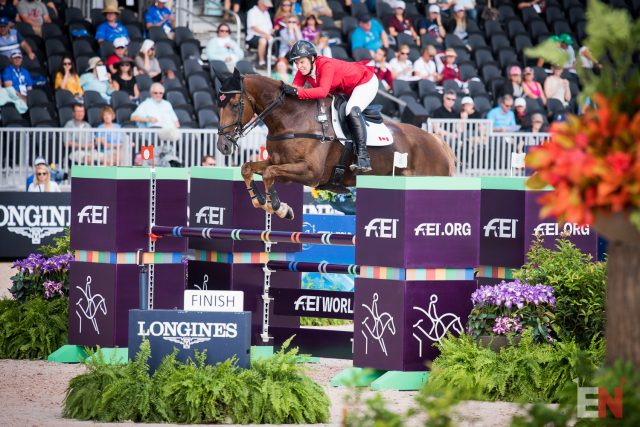 Lisa Marie Fergusson and Honor Me (CAN). Photo by Leslie Threlkeld.

40th – Lisa Marie Fergusson and Honor Me – Canada
Two rails down to finish 40th on 56.6
Moved up 40 places after dressage

On Honor Me feeling fresh for show jumping: “He’s a little bit easier to ride when he’s a bit tired to be fair, but he came out and was wild. Every time the crowd would cheer he was on his hind legs, bouncing around and tossing his head, which made warm-up a little interesting. But he went in there and he tried really hard. You can’t ask for more than that.” 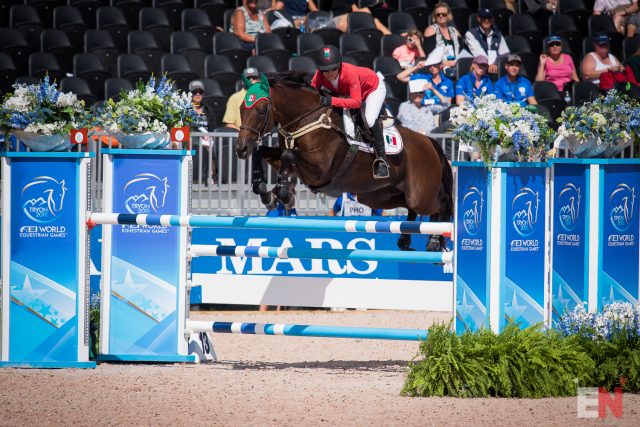 44th – Daniela Mougel and Cecelia – Mexico
Three rails down to finish 44th on 57.9
Moved up 29 places after dressage

On finding Cecelia: “My husband (Zully) found her on Eventing Nation online. One day we were about to go to bed and he’s like, “‘Daniela! Dani, this is your horse!’ And he kept asking me, like three days in a row, saying, ‘This is the horse for you. This is the horse for you.’ He was right; it was meant to be. … She is the best partner I could have ever asked for.” 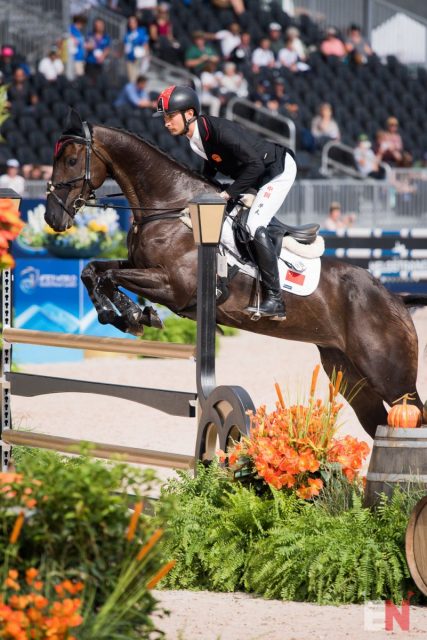 45th – Alex Hua Tian and Ballytiglea Vivendi – China
One rail and 2.0 time penalties to finish 45th on 58.0
Moved up 38 places after dressage

On competing as an individual for China: “When we were making our four year strategy up to the Tokyo Olympics after Rio, competing at championships like the Asian Games and World Equestrian Games might not be such big events in the public eye in China, but as riders it’s so important that we get the exposure and the experience here. Boris (Ballytiglea Vivendi) is also an exciting potential horse for Tokyo in two years time, and to be able to give him the flight, the experience, the exposure is invaluable. They learn a lot, but we also learn a lot about them, so it’s really important.” 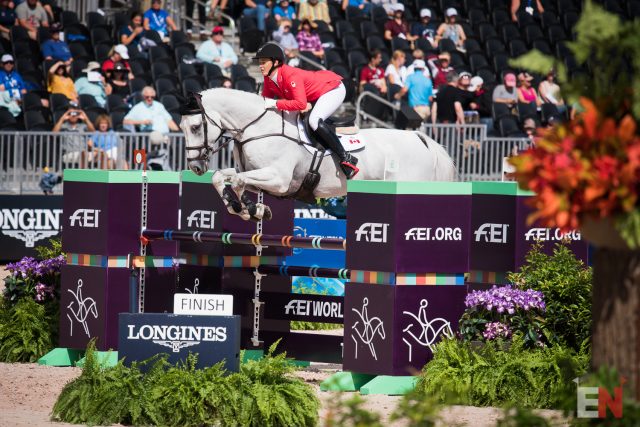 47th – Colleen Loach and Qorry Blue d’Argouges – Canada
Four rails down to finish 47th on 60.4
Moved up 13 places after dressage

On being pathfinder for the Canadian team: “I’m happy that I went first because I probably would have been told to take the option at that water, and obviously Qorry didn’t have a problem with it. So I was happy with my plan and I was confident, and I went out there and executed it. I was lucky everything fell into place, unlike today.” 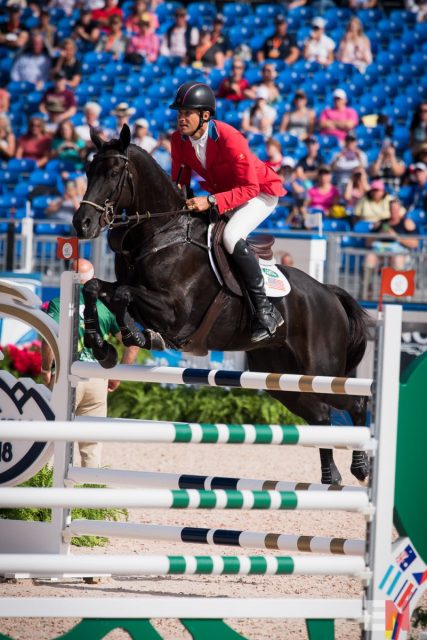 On Erik Duvander’s first championship with the U.S. team: “I think he’s done a brilliant job, and it’s just sad for us that we didn’t produce a better score for him. I feel like there’s been huge improvements in our training and our riding, and he’s put so much effort into trying to bring our country up. Unfortunately, he probably hasn’t had enough time to make a huge impact yet, but I hope he continues because I do think he’s the right man for this country.” 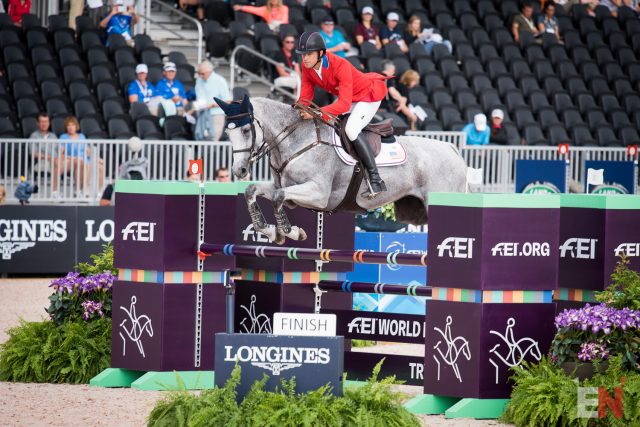 66th – Will Coleman and Tight Lines – USA
Three rails to finish 66th on 99.2
Moved up two places after dressage

On being pathfinder for the U.S. team: “It is never an easy job. I thought I was on a good horse to do it, and I still think I’m on a good horse. I think there are probably some things I could have done with my plan that suited my horse better, and in hindsight there’s always things that you would change. But I came in, I was as prepared as you could be, and I really thought that my performance would be better.”

On the rest day: “You want them to recover as much as you can, but at the same time they’re really fit and they’re a little out of sorts today, too. I think some horses will come out a little flatter for it, and some are going to come out fresher. I think in either case it could be harder for the riders in a way.” 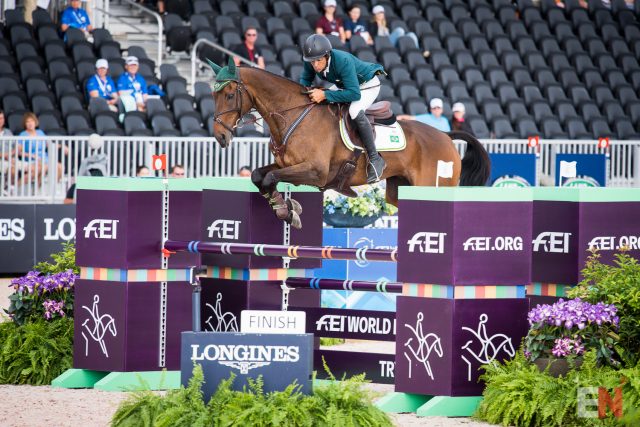 On being pathfinder for Brazil: “I’m really proud of my horse. Honestly it’s hard to talk about yourself, but I have decided I’m really proud of myself too. My horse is still green, he’s done only four shows at the three-star level. He shows all the potential here. I got a little bit unlucky in the cross country. He pulled a shoe in the first water at jump number seven, so we had to go run all the way around with no shoe.”

On completing WEG: “It was an incredible experience for me, and I will keep the work on and try to be better. It’s not the results on paper that I really want, but I will keep working hard the way I always try to do. I will come back and improve, and that’s really my goal.” 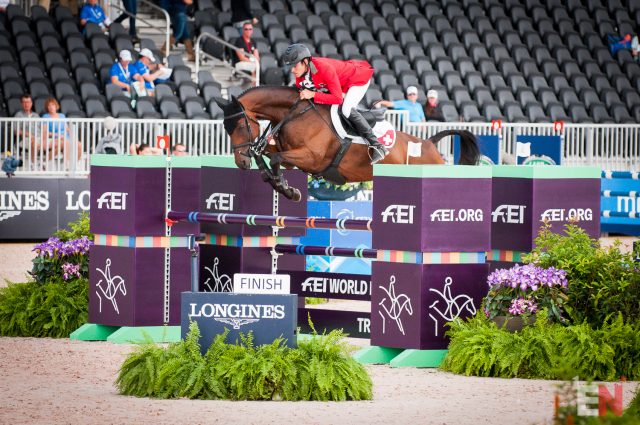 70th – Felix Vogg and Colero – Switzerland
One rail and 3.0 time penalties to finish 70th on 159.2
Dropped 50 places after dressage

On what Colero learned at WEG: “I think he didn’t make the mistakes. I think more I did the mistakes yesterday and today. … He’s a horse who wants to go but he has not the experience. He did four three-stars before he came here. If I do the work for the future ride, he will do it.”